Heightened uncertainty acts like a decline in aggregate demand because it depresses economic activity and holds down inflation. Policymakers typically try to counter uncertainty’s economic effects by easing the stance of monetary policy. But, in the recent recession and recovery, nominal interest rates have been near zero and couldn’t be lowered further. Consequently, uncertainty has reduced economic activity more than in previous recessions. Higher uncertainty is estimated to have lifted the U.S. unemployment rate by at least one percentage point since early 2008.

The U.S. economy has slowed substantially in recent months. Many commentators argue that uncertainty about future economic conditions has been an important factor behind the tepid recovery. According to a recent New York Times article, “A rising number of manufacturers are canceling new investments and putting off new hires because they fear paralysis in Washington will force hundreds of billions in tax increases and budget cuts in January, undermining economic growth.” However, evidence supporting this view is scant. In a 2011 Wall Street Journal interview, University of Chicago economist Robert E. Lucas, Jr., said he had “plenty of suspicion, but little evidence” that uncertainty was holding back the recovery.

In this Economic Letter, we examine the economic effects of uncertainty using a statistical approach. We provide evidence that uncertainty harms economic activity, with effects similar to a decline in aggregate demand. The private sector responds to rising uncertainty by cutting back spending, leading to a rise in unemployment and reductions in both output and inflation. We also show that monetary policymakers typically try to mitigate uncertainty’s adverse effects the same way they respond to a fall in aggregate demand, by lowering nominal short-term interest rates.

Our statistical model suggests that uncertainty has pushed the unemployment rate up at least one percentage point in the past three years. By contrast, uncertainty was not an important factor in the unemployment surge during the deep downturn of 1981–82. One possible reason why uncertainty has weighed more heavily on the economy in the recent recession and recovery is that monetary policy has been limited by the zero lower bound on nominal interest rates. Because nominal rates cannot go significantly lower than their current near-zero level, policy is less able to counteract uncertainty’s negative economic effects.

The demand effects of uncertainty

We use data from the Thomson Reuters/University of Michigan Surveys of Consumers in the United States and the Confederation of British Industry (CBI) Industrial Trends Survey in the United Kingdom to measure the perceived uncertainty of consumers and businesses. Since 1978, the Michigan survey has polled respondents each month on whether they expect an “uncertain future” to affect their spending on durable goods, such as motor vehicles, over the coming year. Figure 1 plots the percentage of consumers who say they expect uncertainty to affect their spending. The figure also tracks the VIX index, a measure of the volatility of the Standard & Poor’s 500 Index. The VIX index is a standard gauge of uncertainty in the economics literature (see Bloom 2009). The consumer uncertainty sample goes from January 1978 to November 2011, the latest month for which we have data. The VIX sample begins in January 1990 and ends in June 2012. 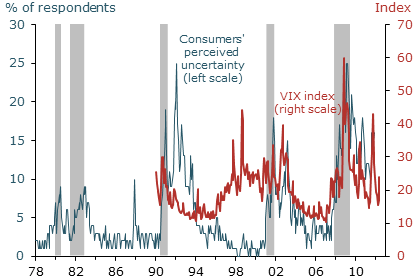 Sources: Thomson Reuters/University of Michigan Surveys of Consumers and Bloomberg.

Figure 1 shows that both the VIX index and consumer uncertainty are countercyclical, rising in recessions and falling in expansions. For example, both measures of uncertainty surged in 2008 and 2009 at the height of the global financial crisis. However, they do not always track each other. The 1997 East Asian financial crisis and the 1998 Russian debt crisis led to large spikes in the VIX, but did not have much impact on consumers’ perceived uncertainty. It is possible that U.S. consumers paid less attention to financial developments in emerging markets during that period.

To study the macroeconomic effects of changes in uncertainty, we use a statistical model that includes consumers’ perceived uncertainty, the unemployment rate, the inflation rate, and the three-month Treasury bill rate. We measure inflation as the 12-month percentage change in the consumer price index. All macroeconomic data are seasonally adjusted. The sample goes from January 1978 to November 2011, matching the Michigan survey sample.

Isolating the effects of uncertainty on the economy is difficult. As Figure 1 shows, uncertainty fluctuates with the business cycle, typically falling in expansions and rising in recessions. To identify the effects of uncertainty, we take advantage of the timing of the survey interviews relative to the timing of macroeconomic data releases (see Leduc and Sill 2010 and Leduc, Sill, and Stark 2007). For example, in the Michigan survey, telephone interviews in a given month are typically conducted before that month’s macroeconomic data are released. Survey respondents do not have information about current macroeconomic conditions when they participate in the interviews. Therefore, movements in perceived uncertainty are probably not driven by concurrent economic conditions (see Leduc and Liu 2012).

We use the timing difference between the survey and data releases to build what might be thought of as a small statistical laboratory. This allows us to measure how, all else equal, an unexpected increase in uncertainty would affect unemployment, inflation, and the nominal interest rate. We compare the result with the situation in which there is no disturbance to uncertainty. As the effects of the unexpected increase in uncertainty propagate over time, we can measure how the three macroeconomic variables fare relative to the situation with no disturbance.

The three panels of Figure 2 show how an unexpected increase in the percentage of Michigan survey respondents reporting they expect uncertainty to alter their spending on durable goods affects the unemployment rate, the inflation rate, and the nominal interest rate. The solid lines represent the median responses of these variables to the increase in uncertainty. The shaded area in each panel represents a 90% probability range for the variable in question. The horizontal axes indicate the number of months after the initial increase in uncertainty. The vertical axes indicate percentage-point changes in the three variables compared with the situation with no disturbance.

Figure 2
Responses to a rise in uncertainty 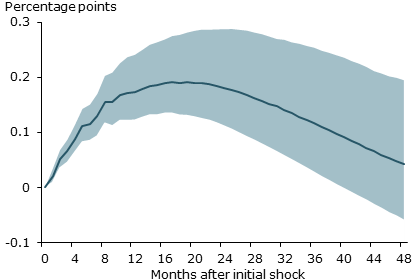 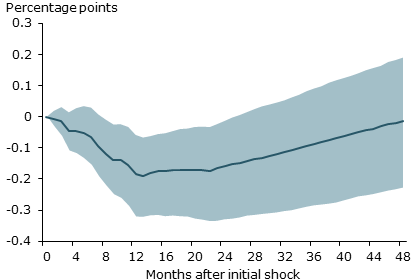 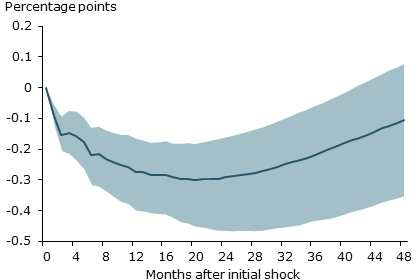 Note: Effects to a one-standard-deviation unanticipated change in uncertainty, as measured from the Michigan survey.

Figure 2 reveals that an unexpected increase in consumers’ perceived uncertainty raises the unemployment rate and pushes down the inflation rate. The unemployment rate reaches a peak in about 15 months and returns to its trend very slowly. It remains above the level with no disturbance for at least three years. Similarly, inflation reaches a trough in about 12 months. However, the effects on inflation appear to be less persistent. Meanwhile, the bottom panel of Figure 2 shows that the nominal Treasury bill rate falls persistently.

Overall, our statistical model suggests that an increase in uncertainty has effects similar to a fall in aggregate demand. The economy slows and inflation falls. Moreover, the decline in short-term interest rates is consistent with the easing of the stance of monetary policy that would prevail if policymakers try to mitigate the negative economic effects of increased uncertainty.

These effects of uncertainty are not unique to the United States. A similar dynamic is evident in the United Kingdom. In Britain, each quarter the CBI surveys roughly 1,000 businesses on whether uncertainty about demand for their products is limiting their capital expenditures. We measure the perceived uncertainty of these businesses by the fraction of survey respondents reporting that uncertainty is a limiting factor. The sample ranges from the fourth quarter of 1979 to the second quarter of 2011.

Although our U.S. measure of uncertainty is based on a consumer survey and our British measure on a business survey, the results are similar. In both cases, perceptions of uncertainty tend to rise in recessions and fall in expansions. Applying our statistical analysis to the CBI data, we see a similar pattern to that observed in the United States: higher perceived uncertainty is associated with higher unemployment, falling inflation, and lower short-term interest rates (see Leduc and Liu 2012 for details).

Uncertainty during the Great Recession and recovery

While uncertainty tends to rise in recessions, it’s not the case that it always plays a major role in economic downturns. For instance, our statistical model suggests that uncertainty played essentially no role during the deep U.S. recession of 1981–82 and its following recovery. This is consistent with the view that monetary policy tightening played a more important role in that recession. By contrast, uncertainty may have deepened the recent recession and slowed the recovery because monetary policy has been constrained by the Fed’s inability to lower nominal interest rates below zero (see Basu and Bundick 2011).