Commercial real estate construction faltered during the 2007 recession and has improved only slowly during the recovery. However, low interest rates have led to higher property valuations and are clearly benefiting the sector. The recovery of commercial property prices has been notable. Some measures suggest that, in some segments of the market, prices are close to their pre-recession highs. Valuation measures do not suggest that current prices are excessive. 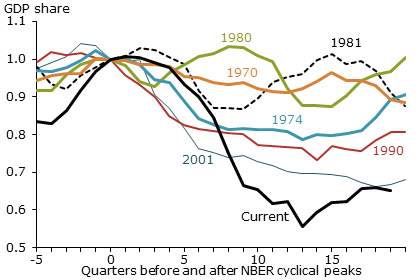 Note: Shares of real GDP indexed to 1 at cyclical peak.

Figure 1 could be read as indicating that the entire commercial real estate market is still seriously depressed. However, the reality is more nuanced. First, the commercial real estate market consists of both new and existing properties. It’s true that builders are not adding much new space. But there are signs of a rebound in the market for existing properties. Second, drilling down below the aggregate statistics, commercial real estate is performing differently both within and across geographical markets. Furthermore, owners of properties that are completed and fully leased have access to credit on very favorable terms. By contrast, conditions are different for more marginal properties that are not leased up or producing reliable cash flows. 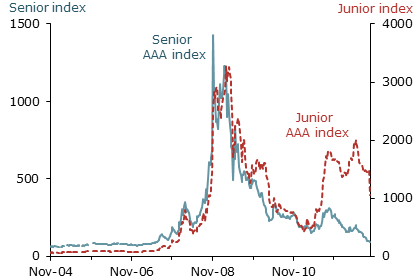 Let’s examine the first point, that conditions in the existing commercial property market are better than might be predicted based on the level of new nonresidential construction. One piece of evidence comes from the risk premiums that investors in commercial mortgage-backed securities (CMBS) require, which are reflected in the interest rate spreads over comparable risk-free rates. Figure 2 plots the path of the spreads of an index of AAA-rated CMBS yields over 10-year Treasury securities. Spreads on the senior CMBS tranche, which are the safest claims, are shown by the solid blue line. These spreads spiked in 2008 during the financial crisis, but have since moved back down to levels in effect before the crisis. All the same, concerns about risk are still evident in the CMBS market. The spreads on the riskier junior tranche of the AAA-rated CMBS index, indicated by the dashed red line, have not recovered as much as for senior bonds. Moreover, these spreads shot up again, along with all other risk spreads, in response to the European sovereign debt crisis.

One common metric for valuing commercial real estate is the capitalization rate, or cap rate. It is defined as the ratio of the expected annual net operating income on a property to the price of the property. The concept is similar to the earnings yield on a stock. Net operating income changes slowly, so much of the variation in cap rates over time is due to changing property valuations.

Hobijn, Krainer, and Lang (2011) investigated the behavior of cap rates in different regional markets and different property categories, including offices, retail, industrial, and multifamily residential. Their goal was to explain what drives cap rates, that is, to what extent cap rates reflect discount rates and expected future cash flows respectively. They constructed a weighted index of cap rates from metropolitan markets across the country using a statistical technique called principal components analysis. They found that this weighted cap rate index moved closely with the level of interest rates. This suggests that changes in interest rates, which occur nationwide, lead to changes in commercial real estate discount rates across all local markets.

By contrast, after accounting for the interest rate component in the statistical analysis, other measures of real estate fundamentals, such as regional unemployment rates, have weak relationships with metropolitan cap rates. This is not to say that cap rates have no relationship to any economic variable except interest rates. Cap rate levels still vary over time with idiosyncratic features of local economies or individual properties. It is simply that most of the common variation of cap rates across markets can be attributed to the movement of interest rates over time. 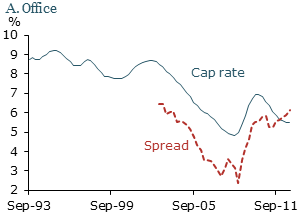 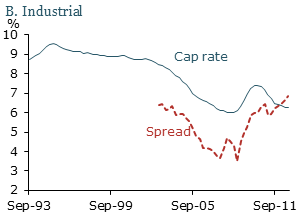 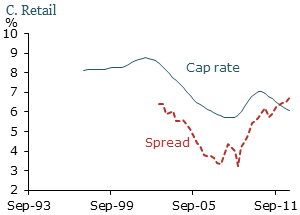 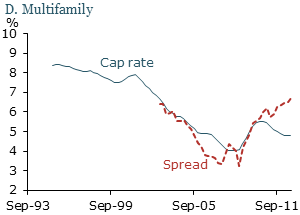 The improvements in cap rates have also been pervasive across different regional markets. Figure 4 shows that cap rates in primary metropolitan markets fell significantly from the first quarter of 2010 to the third quarter of 2012. This makes sense given the importance of interest rates for commercial real estate valuations. Of course, interest rates are determined in global financial markets. Borrowers with commercial property in different regional markets compete for funding in the broad financial market. Changes in interest rates should filter down to property markets everywhere. However, despite the nationwide improvement in commercial real estate, significant regional variation exists. 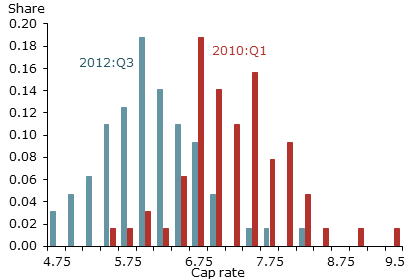 Figure 4 shows the geographic dispersion in cap rates. For example, average cap rates in San Francisco are currently close to 4%, while cap rates in Detroit are closer to 7%. In other words, investors value a dollar of earnings on commercial property in San Francisco at a multiple of 25. But they are only willing to pay about 14 times earnings for property in Detroit. Similarly, within markets, cap rates vary based on property classification. Cap rates on both Class A and Class B properties have generally come down over the last two years. But, even within the same metropolitan area, significant gaps in value are found between higher- and lower-quality properties. This undoubtedly reflects different local economic conditions and different expectations for future earnings growth even for properties within the same geographic market. These valuation disparities suggest that there still are very large differences in opportunities for different kinds of projects to get funding.

To elaborate, the red dashed lines in Figure 3 show the spread between cap rates and the yield on inflation-protected Treasury securities (TIPS). TIPS yields represent a real interest rate since they adjust to inflation. Thus, they are an appropriate benchmark for cap rates, which are based on cash flows that also adjust to inflation. Based on current cap rates, commercial real estate yields are very low. However, other benchmark bond market yields are even lower, including nominal yields that don’t adjust to inflation, such as the 10-year Treasury note or risky corporate bonds. This suggests that low cap rates are natural in a low interest rate environment. In itself, that does not tell us whether low interest rates are leading to excessive commercial real estate pricing. However, it does support the notion that improvements in commercial real estate are part of a broader healing process taking place throughout the economy.