After the financial crisis began in 2007, the Federal Reserve reduced the federal funds rate, its main policy tool, close to zero, its lowest possible level. It has remained there since. Because the federal funds rate cannot be reduced further, the Fed has introduced unconventional policy measures to stimulate the economy. One of these unconventional measures is large-scale asset purchases, which are intended to lower long-term interest rates. Another measure is known as forward guidance, communication about the Fed’s expectations for future policy that is intended to guide market expectations and reduce policy uncertainty.

The effectiveness of these new policy tools is an open question. In particular, we don’t know whether the standard channel for transmitting monetary policy through financial markets works as well now as it did in the past. One way to measure the effectiveness of unconventional monetary policy tools is through the U.S. dollar exchange rate. Although the Fed does not target the exchange rate specifically, monetary policy decisions ultimately affect the dollar’s value, which can have important effects on the economy. For example, before the crisis, the dollar typically depreciated following declines in the target for the federal funds rate. The lower value of the dollar in turn helped raise U.S. net exports, boosting output and employment in the United States.

This Economic Letter examines how unconventional policy decisions have affected the value of the. dollar since the Fed lowered the federal funds rate close to zero in December 2008. We look at how the dollar’s value changed during the minutes immediately after Fed policy announcements. This helps isolate the response of the dollar to monetary announcements from other possible factors. In addition, because financial and currency markets may anticipate policy changes and build those expectations into prices, we account for those expectations and focus on the effects of surprise policy announcements.

Our analysis shows that unconventional monetary policy has affected the dollar exchange rate. In particular, surprise unconventional policy easing has pushed down the value of the dollar roughly as much as similar surprise downward moves in the federal funds rate did before the crisis.

Identifying how unconventional monetary policy actions have affected the dollar since 2008 is challenging. Because the Fed’s recent actions are unprecedented, we have limited data to work with. To see how unconventional policy actions have affected the dollar’s value, we focus on the dates of monetary policy announcements. We broadly label these quantitative easing announcements, but they could contain news about both large-scale asset purchases and forward guidance. We look at what happened to the trade-weighted value of the dollar measured against a basket of currencies from major U.S. trading partners, including the Canadian dollar, the pound, the euro, and the yen, in a tight time window around these announcements.

The quantitative easing announcements in our sample include statements by the Fed’s policymaking board, the Federal Open Market Committee (FOMC), after scheduled meetings, and speeches and congressional testimony by Fed Chairman Ben Bernanke in which he signaled possible policy changes. Our sample includes all announcements regarding the Fed’s three rounds of quantitative easing.

We assume policy announcements immediately influence the views of market participants, and that these views are quickly reflected in the value of the dollar. To capture this effect, we look at movements in the trade-weighted value of the dollar in a 30-minute window around each policy announcement in our sample, from 10 minutes before the announcement to 20 minutes after. Using such a narrow time span allows us to isolate policy announcement effects from other possible influences on the dollar’s value. Other studies have used similar currency data (see Neely 2012 and Glick and Leduc 2012), but rely on less-frequent daily data or consider only the first round of quantitative easing.

How much an announcement affects the dollar’s value depends largely on whether market participants expect it or were surprised by it. If market participants anticipate the news, then no additional information is revealed and the exchange rate should not move. This makes determining market expectations crucial for our analysis.

Quantitative easing is designed to lower longer-term interest rates. That suggests that a potential way of measuring the extent to which market participants expected or were surprised by unconventional policy announcements is to look at long-term Treasury rate futures. Specifically, for any given quantitative easing announcement, we can measure changes in long-term Treasury rate futures over the same 30-minute window used to calculate the change in the dollar’s value. Big swings in futures prices at the time of the announcement suggest that the change in policy surprised participants (for more details, see Wright 2011). 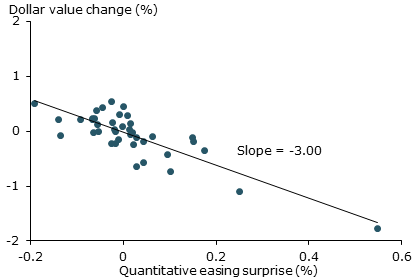 Figure 1 plots the relationship between quantitative easing policy surprises and the trade-weighted value of the U.S. dollar. The chart’s horizontal axis shows the extent of the policy surprise in percentage points. A higher value implies a larger degree of surprise easing in a policy announcement. The vertical axis shows the change in the dollar’s value, also in percentage points. For this measure, a higher value implies a greater dollar appreciation; a negative value implies depreciation.

The figure includes quantitative easing policy surprises with negative values, indicating unexpected policy tightening, and positive values, indicating unexpected policy easing. The largest positive surprises came on January 18, 2008, and March 18, 2009, during the first round of quantitative easing. The figure shows a clear negative relationship between the magnitude of surprise easing and the value of the dollar, as captured by the downward sloping line. In other words, the greater the surprise, the more the dollar depreciates. In fact, the line indicates that a 1 percentage point easing in long-term Treasury futures rates, suggesting a policy surprise, leads within 30 minutes to a roughly 3 percentage point decline in the trade-weighted value of the dollar.

How strong are these effects on the dollar’s value compared with the impact of conventional monetary policy? To gauge this, we compare these results with the effects of surprise changes in the federal funds rate before the financial crisis. This conventional policy sample period runs from January 1994, when the FOMC began issuing press releases whenever it met or changed monetary policy, until October 2008, just before the Committee lowered the federal funds rate close to zero. 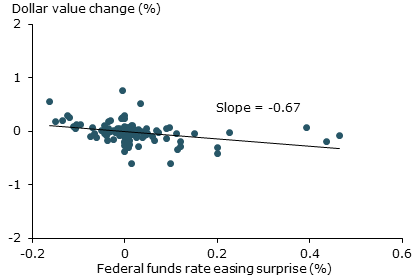 To make an apples-to-apples comparison on how conventional and unconventional policy surprises affect the dollar, we need to develop a way of making the two types of policy announcements equivalent for measurement purposes. To do that, we look at how long-term interest rate futures changed on average following a surprise change in the federal funds rate during our pre-crisis sample period. We use this estimate to translate our quantitative easing surprises into an equivalent measure to compare with federal funds rate surprises (see Glick and Leduc 2013 for details).

Wright, Jonathan. 2011. “What Does Monetary Policy Do to Long-Term Interest Rates at the Zero Lower Bound?” National Bureau of Economic Research Working Paper 17154.