The Price of Stock and Bond Risk in Recoveries

Investor aversion to risk varies over the course of the economic cycle. In the current recovery, the rebound in risk-taking is near the top of the historical range. The pace of economic growth does not appear to explain the increase in risk appetite. However, statistical research suggests that the severity of the preceding recession explains about 20% of the change in a measure of the long-term stock price-earnings ratio. And corporate profit growth appears to explain about 40% of the decline in the spread between risky and risk-free bonds.

The current economic recovery has been sluggish compared with past upturns, but the stock market has posted sizable gains. Do higher stock prices mean that investors now have greater appetite for risk? If so, is this greater risk-taking unusual compared with previous economic cycles? This Economic Letter compares investor risk aversion in the current recovery with past recoveries since World War II. The Letter considers the price of risk, that is, the return investors require to take on a given quantity of risk at a particular point in time. It also examines what explains the change in investor risk aversion during the recovery.

Asset pricing and the business cycle

The expected return for holding a risky financial asset is the sum of the return from a risk-free asset and the premium earned from bearing risk. This risk premium can be broken down into the quantity of risk in an asset multiplied by the price for bearing a given unit of risk. That risk price depends on investors’ level of risk aversion.

To measure the risk premium of a financial asset, researchers subtract a measure of the risk-free return from the expected return of holding the risky asset, where the expected return takes into account the potential for default. For example, in the case of a corporate bond, the risk premium is the difference in the yield of a risky bond from that of a Treasury security with a similar maturity. For stocks, the risk premium can be measured by comparing a stock’s expected earnings yield, known as the price-earnings ratio, with an inflation-adjusted Treasury bond yield.

Researchers have long investigated the links between asset markets and the real economy (see Cochrane 2008). They have found that equity risk premiums tend to be higher at business cycle troughs than at peaks. Many economic variables that predict excess returns are correlated with or predict business cycles (Fama and French 1989). In addition, price-dividend ratios move positively with the business cycle. But this movement cannot be explained by variation in expected dividends or interest rates, which indicates large countercyclical variation in expected excess returns (Campbell and Shiller 1988a, b; Shiller 1989; Cochrane 1991, 1992).

John Campbell and John Cochrane (1999) have constructed a consumption-based asset pricing model that takes into account investor habits. The intuition underlying their model is that investors’ income from labor tends to do poorly in recessions, making them more reluctant to take on risk, which prompts them to demand higher compensation for holding risky assets. When the economy recovers and labor income improves, investor risk appetite rises and the risk premium falls. Campbell and Cochrane suggest that, holding the quantity of risk constant, the price of risky assets rises during recoveries as the price for bearing risk recedes. In their model, investor habits are slow to change. So the rebound in risk-taking during the recovery can be affected by the severity of the preceding recession. Based on these insights, this Economic Letter uses financial market data to compare asset price behavior in the current and past recoveries.

Risk premiums cannot be directly observed and must be estimated. A financial asset’s risk premium consists of the price and the quantity of risk. A conventional measure for equities uses the one-year-ahead forward earnings yield, which is expected earnings over the next four quarters divided by current stock price, less the inflation-adjusted interest rate on risk-free assets. However, both corporate earnings and interest rates are cyclical. Furthermore, using only four quarters of forecast earnings may not capture the long-term cash flows in stocks.

To measure the risk premium for corporate bonds, the spread of the bond yield over a Treasury security of similar maturity can be used. Assume that bond ratings take into account the economic cycle so that the expected default risk signaled by a given bond rating is more or less constant. Holding the bond rating fixed, the variation over time in the yield spread between risky and risk-free bonds is driven primarily by changes in investor risk aversion. 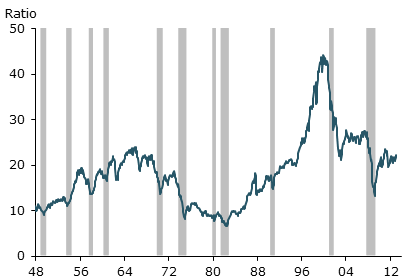 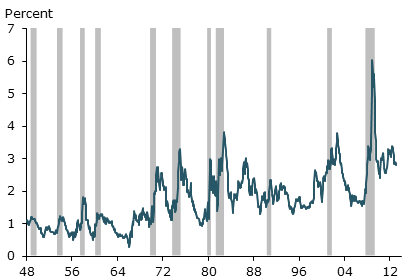 Figure 3
Price-earnings ratios in current and past recoveries 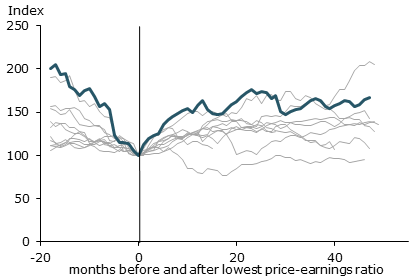 Note: Ratios indexed to 100 at lowest ratio during each recession.

Figure 4
Baa bond spreads in current and past recoveries 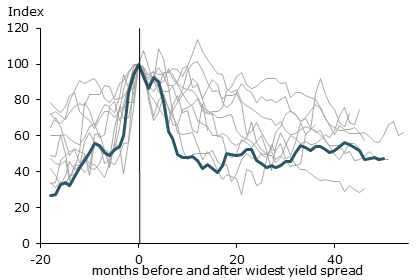 Note: Spreads indexed to 100 at largest value during each recession.

Figure 4 charts the Baa bond spread, but is indexed to 100 at the widest spread during the preceding recession. In the current recovery (thick blue line), the bond spread retraced sharply as the economy emerged from the Great Recession, but was also within the range of past recoveries. Thus, changes in investor risk aversion during the current recovery appear normal.

The declining price of bearing risk in the current expansion may seem normal compared with past recoveries. However, three distinguishing characteristics of the current recovery may have affected investor risk appetite and the price of risk. First, the economy is emerging from a very deep recession. Second, economic growth has been unusually slow. Third, despite slow growth, corporate balance sheets have been exceptionally strong.

To study how economic growth has affected risk price, I examine the relationship between changes in risk aversion and growth of inflation-adjusted gross domestic product over the first 44 months of recoveries since World War II, excluding three shorter expansions. Changes in price-earnings ratios are computed from the minimum during the preceding recession and changes in bond spreads are computed from the maximum.

The change in the Shiller price-earnings ratio in past recoveries had little correlation with the pace of economic growth or the decline in unemployment. Results are similar for changes in bond spreads. Hence, the rebound in risk-taking does not seem to be related to the pace of growth.

Despite weak growth, corporate balance sheets and profits have been strong during the current recovery. What then is the relationship between the risk price and profit growth? I use corporate profits with inventory valuation and capital consumption adjustments reported in the U.S. Commerce Department’s National Income and Product Accounts. The correlation between the change in the Shiller price-earnings ratio and profit growth over the first 44 months of recovery is also low. The denominator in the Shiller PE ratio measures long-term inflation-adjusted profits. Hence, the finding that short-term profit growth during the initial recovery has no effect on the change in the price-earnings ratio is consistent with the interpretation that changes in the Shiller PE ratio are driven by changes in the price of risk.

The bond spread is another story. The spread narrowed significantly faster in recoveries with strong profit growth. In statistical terms, the pace of corporate profit growth explains about 40% of the decline in the corporate bond spread during the initial recovery. This suggests that the default risk of a given bond rating may not actually be constant over the business cycle. Nevertheless, in the current recovery, the narrowing of the spread is close to the value predicted by corporate profit growth.

The change in the price of risk in the current recovery appears to be near the top of the historical range observed in past recoveries since World War II. The pace of economic growth does not seem to explain the rebound in risk-taking as measured by the Shiller price-earnings ratio and corporate bond yield spreads. However, the severity of the preceding recession explains about 20% of the change in the Shiller PE ratio. Corporate profit growth explains about 40% of the decline in bond spreads.

Simon Kwan is a vice president in the Economic Research Department of the Federal Reserve Bank of San Francisco.