Taxes collected by the U.S. government are paid out through transfers that promote economic equity among states. This system redistributes funds between richer and poorer states over the long run and helps stabilize states hit by temporary economic shocks. Surprisingly, little if any of this redistribution and stabilization comes from transfer payments through federal programs and services. Rather, differences across states in federal tax payments drive these effects. Research suggests a similar system of taxes and transfers in the European Union could have reduced recent economic divergence among member states.

U.S. states collect their own taxes and determine their public spending. But they also pay taxes to and receive transfer payments and public services from the federal government. Many commentators have argued that this system of federal taxes and transfers provides not only considerable redistribution among regions, but also stabilization (see, for example, Krugman 2012). These commentators suggest that if the European Union (EU) had developed a similar system among member states, it might have avoided its recent fiscal and economic crises. In fact, as the EU was formed in the early 1990s, many economists doubted its viability because it lacked a stabilization system similar to that in the United States (see, for example, Sala-i-Martin and Sachs 1991).

Still, the size and mode of action of redistribution and stabilization in the U.S. system are not well understood. Stabilization implies that even a very high-income state whose economy temporarily worsens would receive some short-term relief through transfer payments or lower tax payments to the federal government, a kind of insurance offsetting temporary negative shocks. A system that provides redistribution from richer states to poorer states does not automatically provide stabilization. In other words, stabilization is separate from redistribution, in which over the long term the federal government collects more taxes from higher-income states and provides less support through transfers or public goods, regardless of temporary state-level economic problems. Thus, the extent of stabilization provided by a given tax-and-transfer system can’t be measured using simple cross-state correlations between average state income and taxes paid or transfers received by a state.

In looking at the U.S. system as a guide for how the EU or other cross-country economic unions might achieve stabilization, it is important to know how much stabilization in the United States results from taxation and how much from transfers, and what kinds of transfers best promote stabilization.

This Economic Letter looks at how much total redistribution and stabilization the U.S. system provides and how much is due to taxes and how much to transfers. We find substantial redistribution and stabilization, both driven entirely by the tax system. Surprisingly, federal government transfers to states—either to governments or to individuals or businesses—provide virtually no redistribution nor stabilization. This holds true whether we measure transfers broadly, including for example salaries of federal workers living in a given state and federal contracts with businesses in the state, or narrowly, including only grants to state and local governments and direct federal transfer payments to individuals, businesses, and nonprofits. One exception is federal emergency unemployment compensation, which rises when a state’s income falls and its unemployment rate increases. Rather, we find that the tax system has the most impact in stabilizing states in the short run, consistent with other research (see Asdrubali, Sorenson, and Yosha 1996, Sala-i-Martin and Sachs 1991, and Feyrer and Sacerdote 2013).

Measuring taxes and transfers for states

The United States is a federal fiscal union. That means that states have tax and spending authority, but also are part of the larger federal tax system. Federal income taxes are proportional and progressive, meaning that people are taxed proportional to their income and pay a progressively higher rate as their income rises. Thus, the federal government tends to take in more tax revenue per capita from higher income states. In addition, the U.S. government tends to transfer more funds to individuals and governments in lower-income states through federal safety-net programs. Some states pay more taxes than they receive in federal transfers and are net contributors. Other states receive more transfers than they pay out in federal taxes and are net recipients. 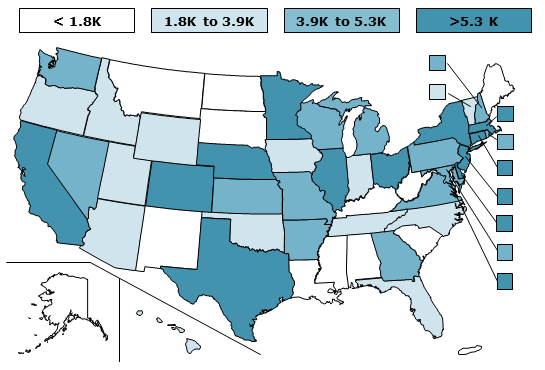 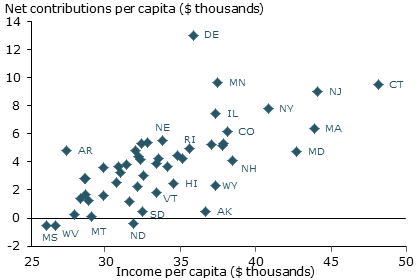 Note: Some state names are deleted for legibility in Figures 2, 3, and 4.

As Figure 1 shows, state differences are substantial. In the figure, each state is shaded according to its average per capita net contribution to the federal government from 1998 to 2010, measured as federal tax payments minus federal transfer receipts. Darker-shaded states have higher net contributions, according to U.S. Census Bureau and Internal Revenue Service data. Transfers consist of grants to state and local governments and direct payments to businesses, nonprofit organizations, and individuals, excluding federal retirement and disability benefits. We refer to this as the narrow measure of transfers. To check our findings, we also consider a broader measure that includes retirement and disability benefits, federal employee compensation, and federal procurement contracts. 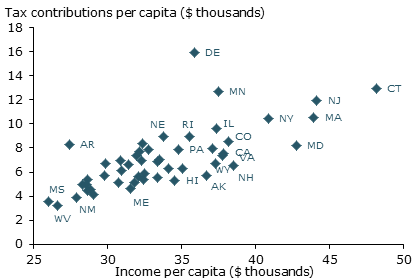 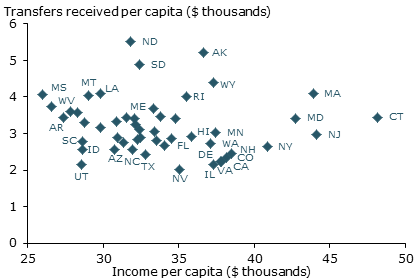 Taxes flowing to the federal government and transfer payments flowing to states help reduce long-run economic disparities among states. An additional function of the U.S. tax-and-transfer system is to help stabilize state economies. When a state’s economy weakens, its net contributions—tax payments minus federal transfers—decrease. When the state’s economy improves, its net contributions increase.

We find that a $1 decrease in a state’s per capita personal income is associated with a $0.38 decrease in net contributions from the state to the federal government. This result is similar to findings by Xavier Sala-i-Martin and Jeffrey Sachs (1991), who find a $0.40 decrease; Tamim Bayoumi and Paul Masson (1995), who find a $0.31 decrease; and James Feyrer and Bruce Sacerdote (2013), who find a $0.25 decrease. As with redistribution, we find that stabilization comes entirely from a drop in taxes. Of the $0.38 of decreased net contributions, $0.36 is due to reduced tax payments and only $0.02 is due to increased federal transfer payments.

The key implication of our findings is that the U.S. tax-and-transfer system provides considerable interregional redistribution and economic stabilization. But what might these findings imply for the European Union? The EU lacks a comparable system of redistribution and stabilization among member countries, and that is often cited to explain why differences in economic performance among EU countries in the aftermath of the global recession have been so much greater than differences among U.S. states. A simple back-of-the-envelope calculation based on our results suggests that if the European Union had a system similar to that of the United States, Greek nominal disposable income per capita would have fallen 6.9% from 2008 to 2011 instead of the actual 11.2%. Income in Germany would have risen 3.7% instead of 5.9%.

This analysis is limited to quantifying the degree of stabilization that could be achieved in Europe if it had a U.S.-style tax-and-transfer system. How much stabilization among countries would be optimal is a separate and much more difficult question. Among other things, it depends on the costs and benefits of centralizing the allocation of resources and any moral hazard due to insuring countries against negative economic consequences resulting from poor policy decisions. Nonetheless, understanding the role of taxes and transfers in the United States could help guide European Union discussions about policy reforms.

Daniel J. Wilson is a senior economist in the Economic Research Department of the Federal Reserve Bank of San Francisco