What explains the sharp decline in U.S. employment from 2007 to 2009? Why has employment remained stubbornly low? Survey data from the National Federation of Independent Businesses show that the decline in state-level employment is strongly correlated with the increase in the percentage of businesses complaining about lack of demand. While business concerns about government regulation and taxes also rose steadily from 2008 to 2011, there is no evidence that job losses were larger in states where businesses were more worried about these factors.

Understanding the large and persistent decline in employment in the United States during the Great Recession of 2007–09 remains one the most vexing challenges in macroeconomics. While there are many potential explanations, three have garnered substantial support among economists:

This Economic Letter tests these alternative views using state-level data from National Federation of Independent Businesses (NFIB) monthly small business surveys (Dunkelberg and Wade 2012). One enlightening survey question asks what is the single most important problem facing the respondent’s business. Potential answers include taxes, inflation, poor sales, financing and interest rates, cost of labor, government requirements and red tape, competition from large businesses, quality of labor, costs or availability of insurance, and other. The NFIB has generously provided us quarterly responses by state. 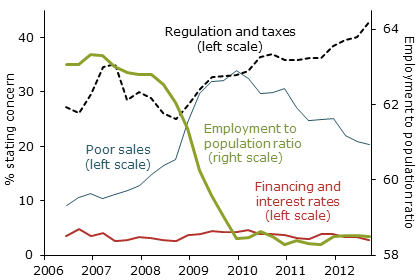 Figure 1 plots the percentage of respondents by quarter citing poor sales, regulation and taxes, or financing and interest rates as their most important problem. The regulation and taxes category includes businesses citing either “taxes” or “government requirements and red tape.” Figure 1 also plots the employment-to-population ratio, which declined sharply from 2007 to 2009 and has remained persistently low during the recovery.

The sharp decline in the employment-to-population ratio corresponds closely to the big increase in the percentage of businesses citing poor sales as their most important problem. From the beginning of 2007 to the end of 2009, this group increased from 10% to over 30%. The trend is broadly consistent with the aggregate demand channel. Employment collapsed precisely when businesses began worrying about poor sales.

In contrast, the percentage of businesses citing financing and interest rates as their top concern has hardly budged. It was low in 2006 and has remained low throughout the recession and recovery. This is especially surprising in the NFIB survey, since small businesses are the enterprises most likely to suffer during a period of tight credit. The survey results do not support the view that availability of financing for small businesses was a major reason for the employment decline.

The percentage of businesses citing regulation and taxes as their most important concern rose steadily from the last few quarters of the recession through 2012. This is consistent with Bloom, Baker, and Davis (2013), who find that policy uncertainty has been unusually high in recent years. Meanwhile, the percentage citing poor sales has declined since its recession peak, but remains well above its pre-recession level.

State-level support for the demand channel

Using aggregate data to test hypotheses about cause and effect is notoriously difficult. For example, it could be argued that the drop in employment and heightened business concerns about poor sales both reflected a shock from a large decline in productivity. Likewise, the increase in measures of policy uncertainty could be associated with the weak recovery in job growth. Which is cause and which is effect might not be obvious. Examining the timing of these variables can help. But it’s still possible that expectations regarding one variable could be driving the other. For example, expectations of poor economic conditions could raise business uncertainty about policies today.

One solution is to use cross-sectional data across geographic regions. Mian, Rao, and Sufi (2012) show that 2006 county-level household debt-to-income ratios were one of the strongest predictors of household spending decline during the Great Recession. Mian and Sufi (2012) found that losses among jobs catering to the local economy, such as positions in retail and restaurants that we refer to as nontradable sector jobs, were concentrated in counties with high debt levels, where spending dropped sharply during the recession. By contrast, losses among jobs catering to the broader economy, such as manufacturing of durable goods, were spread throughout the country. The authors argue that this indicates that a large decline in household spending, driven by household financial weakness stemming largely from the collapse in house prices, explains a large proportion of Great Recession job losses. 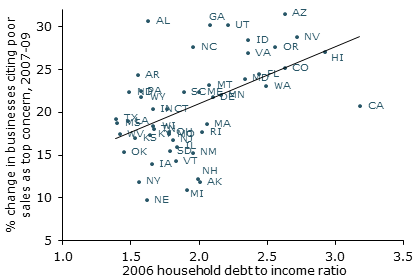 Does the NFIB survey evidence support this argument? In Figure 2, we show state-level correlations between 2006 household debt-to-income ratios and changes in the percentage of businesses citing poor sales as their top concern from 2007 to 2009. The percentage of businesses citing poor sales increased more in high-household-leverage states, precisely where the largest spending and employment declines in the nontradable sector occurred. This is consistent with the household spending evidence in Mian, Rao, and Sufi (2012).

To extend this analysis, we performed a regression, a statistical test of the relationship between state-level job losses in the nontradable sector from 2007 to 2009 and the percentage of businesses in that state citing poor sales. The test showed a significant negative correlation. In other words, states in which businesses cited poor sales also registered disproportionately sharp drops in jobs and household spending. This supports the view that a drop in aggregate demand led to job losses during the recession. 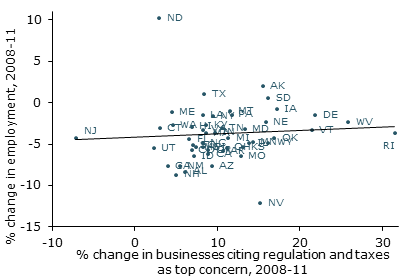 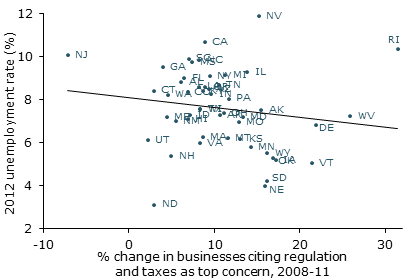 Figure 1 confirms the pattern in Baker, Bloom, and Davis (2013) that small business concerns about regulation and taxes rose after the Great Recession and remained elevated in 2012. Can this explain the job market’s current weak performance? The state-level NFIB survey responses may help answer this question.

We focus on the rise from 2008 to 2011 in the percentage of businesses citing regulation or taxes as their primary problem, the period when this concern increased the most. The increase varied significantly from state to state. For example, Rhode Island saw a rise of over 30 percentage points, while New Jersey saw a decrease of almost 10 percentage points.

Figure 3 shows there was almost no correlation between job growth in a state from 2008 to 2011 and the increase in the percentage of businesses citing regulation and taxes as their primary concern. In fact, if anything, the correlation is positive.

States in which businesses increasingly cited regulation and taxes experienced higher job growth, although this correlation is not statistically significant. The lack of correlation is not a matter of the timing we choose. For example, there also is no strong correlation if we examine the 2009–11 period or the 2010–11 period instead.

What do we learn from state-level evidence?

State-level evidence on business concerns allows us to test alternative explanations for the large and persistent U.S. employment decline from 2007 to 2009. The evidence supports the view that aggregate demand was important. From 2007 to 2009, businesses in states with high household leverage increasingly cited poor sales as their top concern, just as household spending and employment in the nontradable sector collapsed. This corroborates the patterns shown in Mian, Rao, and Sufi (2012) and Mian and Sufi (2012).

The state-level evidence is less consistent about regulation and taxes as factors holding back employment. There are important caveats. For example, it’s possible that business uncertainty held back hiring nationally but did not show up differently across states. Or perhaps the NFIB’s specific question does not capture the type of policy uncertainty that researchers believe has been holding back hiring. In any case, the view that government-induced uncertainty held back employment must be consistent with the absence of any state-level correlation between employment growth and increases in business concerns about regulation and taxes.

This begs a question: If government-induced uncertainty is not holding back hiring, then what is? The basic pattern in Mian and Sufi (2012) continued to hold through 2012. U.S. counties with high household debt levels coming into the recession are the same counties with depressed levels of employment in the nontradable sector today. So why did the initial demand shock in these counties have a more permanent effect on employment? Important long-term trends should be considered here, in particular the continued decline in manufacturing and other mid-skill “routine” jobs (see, for example, Charles, Hurst, and Notowidigdo 2012 and Jaimovich and Siu 2012). Understanding why the United States has had such difficulty replacing lost jobs in the long run remains an open question.

Atif Mian is a professor of economics and public policy at Princeton University and a visiting scholar at the Federal Reserve Bank of San Francisco.

Amir Sufi is a professor of finance at the University of Chicago Booth School of Business.