Balance of Payments in the European Periphery

The countries of the European periphery are experiencing a balance of payments crisis stemming from persistent current account deficits and sharply lower private capital inflows, a condition known as a sudden stop. In countries with fixed exchange rates, sudden stops typically drain foreign reserves, forcing currency depreciation which eventually shifts the current account from deficit to surplus. However, the sudden stop has not prompted the European periphery countries to move toward devaluation by abandoning the euro, in part because capital transfers from euro-area partners have allowed them to finance current account deficits.

A balance of payments crisis typically arises when a country can’t finance its foreign transactions. A country’s balance of payments can be separated into two main parts: the current account, which reflects the trade balance in goods and services; and the financial account, which reflects the balance on net international financial transactions. In turn, the financial account can be broken down into, one, the balance on international private capital flows; and, two, changes in official holdings of foreign reserve assets, such as gold, foreign currency, and foreign sovereign debt.

Three things are noteworthy about current account deficits. First, they occur when a country’s imports exceed its exports. Second, they indicate that a country’s consumption and investment exceed its production. In such a situation, a significant share of payments for purchases goes to foreigners, meaning that aggregate savings are below aggregate investment. Third, because a country running a current account deficit consumes more than it produces, it is forced to borrow. In effect, the country is promising to pay for extra consumption today by consuming less than it produces some time in the future.

Many recent episodes of financial turmoil in emerging markets were essentially balance of payments crises that followed a similar pattern. They tended to begin with persistent current account deficits that stemmed from some combination of the following factors: an overvalued currency, which fed persistent trade deficits by making imports substantially cheaper than domestic goods and exports less competitive abroad; excessive government spending, which caused consumption to exceed output; and too much lending by the financial sector, which drove investment above savings.

If the government of a country with a large current account deficit allows the value of its currency to be determined by the market, dangerous imbalances are less likely to develop. When capital inflows are insufficient to finance deficits, the country’s currency will tend to depreciate. In turn, currency depreciation will make the country’s exports more competitive and trim the deficit. However, if the government maintains a fixed exchange rate, as happened in most emerging-market financial crises, no adjustment can take place. Heavy foreign borrowing and large current account deficits can grow unchecked. 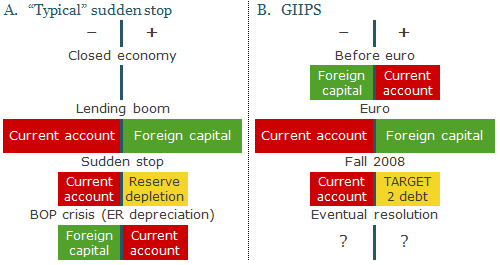 A country consuming beyond its means only runs into problems when it can’t borrow anymore. As one banker famously put it, “It is not speed that kills. It is the sudden stop” (Dornbusch et al. 1995). Foreign capital inflows may come to a sudden stop for a variety of reasons. These can include global shocks; an increasingly burdensome interest rate on the debt of heavily indebted countries, known as “debt intolerance” (Reinhart et al. 2003); or concerns about whether a fixed exchange rate can be sustained, which prompt speculative attacks on the country’s currency. The left panel of Figure 1 illustrates this sudden stop scenario. As foreign capital inflows dry up, current account deficits must be financed by drawing down official foreign reserves.

A balance of payments crisis turns into a currency crisis when the government is no longer able to defend the fixed exchange rate. The currency is either devalued or allowed to depreciate by letting it float on the open market. Depletion of reserves may trigger a very powerful and rapid speculative attack against the currency as traders try to take advantage of what they believe will be an inevitable devaluation or depreciation, a dynamic famously described by Paul Krugman (1979).

The left panel of Figure 1 depicts a balance of payments crisis with an exchange rate adjustment. Currency depreciation allows the current account balance to adjust from deficit to surplus. Imports instantly become more expensive, while exports become cheaper for foreign buyers, opening the way for a trade surplus. Domestic consumption falls because wages don’t keep up with the inflation triggered by currency depreciation. Capital flows out as debt to foreign creditors is repaid and foreigners cut back investment in the country (Dornbusch 2001). These adjustments are often extremely painful, typically occurring amid a deep recession, skyrocketing unemployment, and falling real wages. Yet, such adjustments are unavoidable when unsustainable current account deficits persist for years. Moreover, the heavier the foreign debt burden, the larger the inevitable adjustment.

Developments in the European periphery 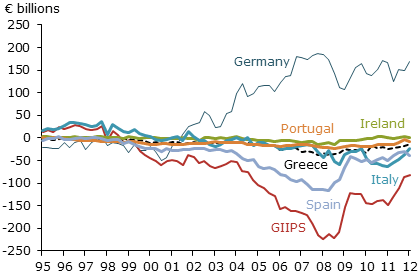 Note: Individual GIIPS lines donít add up to the total GIIPS because of inter-GIIPS balances. 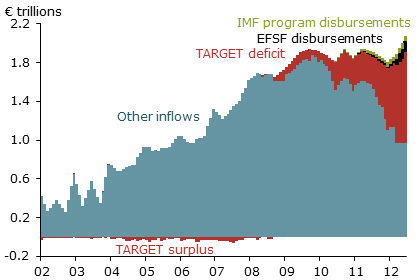 Note: Other inflows are computed as a difference between total and official flows (including TARGET balances) and are thought to mostly include private capital flows. Total flows are stocks from net international investment position.

The 1999 introduction of the euro set the stage for current account imbalances in some euro-area countries. A common currency reduced trade costs, thereby boosting overall trade volume. At the same time, labor costs rose in the periphery relative to core countries, especially Germany. As Figure 2 shows, this produced surpluses in Germany and widened current account deficits in Greece, Italy, Ireland, Portugal, and Spain (GIIPS), especially Spain. Figure 3 shows that, before the crisis, private capital flowed from Germany and other core euro-area countries into GIIPS, offsetting these rapidly growing current account deficits. The right panel of Figure 1 depicts this situation.

The 2007–08 global financial crisis hit cross-border capital flows hard, but GIIPS were not initially affected more than other countries. However, in 2009–10, a sudden stop in private capital flows took place as it became apparent that the sovereign debt of some periphery countries might not be sustainable. The credit ratings of Greece, Portugal, and Ireland were marked down, and spreads on their government debt relative to German debt began to rise. If these countries had not been euro-area members, their current accounts would have adjusted, most likely through a currency crisis and rapid depreciation. Instead, these countries remained in the euro area and continued to run current account deficits, despite rapidly falling private capital inflows, and, in some cases, capital flight.

How was that possible? In essence, public capital replaced private capital. As private capital flows to GIIPS fell, they were replaced by growing liabilities of the central banks of GIIPS to the European Central Bank and the central banks of individual euro-area countries, a network known as the Eurosystem. This flow took place within the Eurosystem’s unified interbank payment network for cross border transfers, known as TARGET2. Figure 3 shows how TARGET2 liabilities of GIIPS replaced private capital flows. In terms of balance of payments accounting, this can be thought of as an accumulation of negative balances on the official foreign reserves account of GIIPS. By contrast, emerging market countries that went through balance of payments crises did not have this option. The ability to continue running current account deficits without private capital inflows has allowed GIIPS to avoid balance of payments crises, giving them opportunities to gradually adjust their external accounts.

Of course, gradual current account adjustment is generally preferable to abrupt rebalancing. This is especially true for GIIPS because exchange rate adjustment is not an option as long as these countries remain in the euro area. Nevertheless, to greater or lesser extents, the European peripheral countries have to go through painful adjustments similar to those experienced by other countries in the throes of balance of payments crises. For current accounts to return to surplus, the competitiveness of GIIPS within the euro area must be restored, which means wages have to fall relative to those in Germany.

Some of these adjustments have already taken place over the past two years. As Figure 2 shows, current account deficits of GIIPS have shrunk. Except in Italy, real wages have fallen about 5% since 2010, and a lot more in Greece. However, for GIIPS to return to sustainable growth paths, further adjustments may be necessary. In previous emerging-market balance-of-payments crises, current account reversals were as much as three times larger than the adjustment registered so far by GIIPS. In some cases, real wages plunged 20–25%. In addition, the sovereign debt and banking problems of GIIPS must still be resolved. In a sense, the ability to accumulate negative balances through the TARGET2 system has bought GIIPS time to make their external accounts sustainable gradually rather than abruptly in a crisis.

Greece, Italy, Ireland, Portugal, and Spain are going through balance of payments crises stemming from persistent current account deficits and net private capital outflows. These crises are like the sudden stops in capital flows that have previously taken place in some emerging market economies. Traditionally, such crises triggered currency collapses, which restored external accounts to sustainable paths. For GIIPS, that can’t happen as long as they stay in the euro area. However, the ability of GIIPS to accumulate negative balances in the Eurosystem’s TARGET2 accounts allows these countries to follow an orderly and gradual path to sustainable external accounts.