What Caused the Decline in Long-term Yields?

Long-term U.S. government bond yields have trended down for more than two decades, but identifying the source of this decline is difficult. A new methodology suggests that reductions in long-run expectations of inflation and inflation-adjusted interest rates have played a significant role in the secular decline in yields. In contrast, standard statistical finance methods appear to overemphasize the effects of lower risk premiums and reduced uncertainty about future inflation.

During the past year, yields on long-term U.S. Treasury securities have fallen to historically low levels. In a recent speech at the Federal Reserve Bank of San Francisco, Federal Reserve Chairman Bernanke said these low yields partly reflect cyclical factors, including the slow pace of economic recovery, modest inflation rates, and accommodative monetary policy (Bernanke 2013). However, in addition to cyclical variation, yields have registered a longer-run decline. Indeed, from 1990 to 2012, 10-year U.S. Treasury yields fell fairly steadily from just over 8% to around 2%.

Identifying the sources of this long-run decline in interest rates is of great interest to monetary policymakers, bond investors, and other financial market participants. But it is quite difficult to do. Standard statistical finance methods as employed, for example, in Wright (2011), suggest that the reduction largely reflected a decline in inflation uncertainty and that any decline in long-run expectations about inflation rates or real, that is, inflation-adjusted, interest rates played a small role. However, these methods suffer from statistical bias and can give misleading results. In recent research, we correct for this bias and reexamine the variation in long-term interest rates (Bauer, Rudebusch, and Wu 2013). This Economic Letter summarizes our results, which differ from the standard ones by suggesting that falling long-run expectations of inflation and real yields were an important part of the secular decline in long-term yields.

Bond owners are promised fixed future cash flows in nominal terms. Therefore, their real returns depend crucially on inflation over the life of the bond. Any increase in inflation erodes the purchasing power of future coupon and principal payments. Accordingly, investors generally demand a higher bond yield as their expectations of future inflation rise.

But the expected path of inflation is not the only thing that bond investors care about. They also worry about the degree of uncertainty attached to these expectations. Investors are typically averse to risk. That is, given the choice between two financial investments with the same average expected return, they will prefer the one with less anticipated variability in that return. Consequently, a bond investor has to receive a higher yield as compensation if the uncertainty about the future path of inflation increases because his future returns after adjusting for inflation are more uncertain. This additional compensation, known as a risk premium, is widely viewed as an important determinant of long-term interest rates. 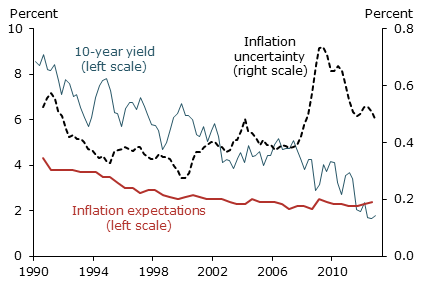 The figure shows a clear secular decline in long-term bond yields and that long-run inflation expectations also fell more or less steadily from about 4% in 1990 to 2% in 2012. Our measure of inflation uncertainty also fell substantially from 1990 to 2000, but rose after the 2001 recession and spiked during the recent financial crisis (see Leduc, Rudebusch, and Weidner, 2009).

The figure suggests that both declining long-run inflation expectations and, at least in the 1990s, lower inflation uncertainty may have contributed to the declining trend in long-term yields. To quantify the contribution of these and other factors to movements in long-term bond yields, we use a statistical model.

Long-term interest rates can be separated into two components: expectations of average future short-term interest rates and a premium that investors require for bearing the risk of a long-term bond investment. The expectations component is driven by inflation expectations and expectations of future real rates of return, which depend on future economic growth. The risk premium component, also called the term premium, is determined by the amount of uncertainty about these future developments and by the degree to which investors are risk-averse and require compensation for a given amount of variability.

In Bauer, Rudebusch, and Wu (2012), we provide a more reliable way to obtain estimates of the parameters of a dynamic term structure model than by using standard estimation methods. In general, it is difficult to determine these parameters because the high persistence of interest rates makes it hard to assess how quickly rates will return to their long-run averages. Standard estimates of dynamic term structure model parameters typically do this poorly because they imply that interest rates revert to their average too quickly. Our new method corrects for this bias and provides more reasonable parameter estimates.

To illustrate the importance of correcting for estimation bias, Figure 2 shows the 5- to 10-year forward rate, that is, the five-year interest rate that can be contracted today for an investment five years in the future, and two alternative estimates of the expectations component in this rate. This forward rate captures information in the 10-year Treasury yield relevant at a 5- to 10-year horizon, since the average of a five-year yield and a 5- to 10-year forward rate is the 10-year yield, on a zero-coupon basis. This distant-horizon forward rate is useful for measuring the long-run determinants of the yield curve because it is largely unaffected by cyclical movements in short-term interest rates and the stance of monetary policy. The expectations component in this forward rate captures the average expected nominal short rate over the 5- to 10-year horizon.

Figure 2
Estimates of the expectations component 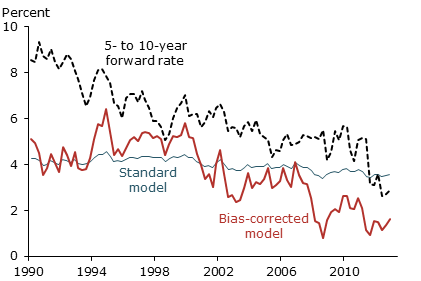 Like the 10-year yield, the 5- to 10-year forward rate shows a pronounced downward trend, falling almost 6 percentage points from 1990 to 2012. In the figure, the standard model line represents the conventional estimate of the expectations component in the forward rate that is obtained from the dynamic term structure model used in Wright (2011). The bias-corrected model line shows the expectations component obtained using the bias-corrected estimates detailed in Bauer, Rudebusch, and Wu (2013). Correcting for estimation bias makes a significant difference in this context. The standard model implies that far-ahead expectations of future short rates are extraordinarily stable with hardly any discernible trend. By contrast, the bias-corrected model results in a substantially more variable expectations component that shows a pronounced downward trend over the sample.

Figure 3
Estimates of the risk premium 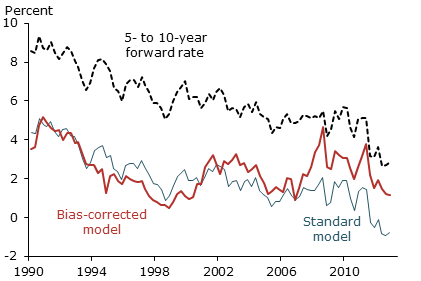 The standard model’s estimate of the risk premium shows a very pronounced decline from about 5% in 1990 to –1% in 2012. According to this estimate, the secular decline in distant-horizon forward rates is entirely attributed to the risk premium component. Notably, due to the very stable expectations component, movements in this risk premium estimate mimic the evolution in the actual forward rate.

Our bias-corrected risk premium tells a quite different story. First, the secular decline is less pronounced. The estimated risk premium falls only about 3 percentage points, which is consistent with some decline in risk compensation due to reduced long-run inflation uncertainty. Second, the bias-corrected estimate of the risk premium is countercyclical. It is elevated throughout the periods of high unemployment during and following the 1990–91, 2001, and 2007–09 recessions. This is consistent with other evidence that risk premiums in asset prices are countercyclical (see, for example, Cochrane and Piazzesi 2005). Finally, our bias-corrected estimate of the risk premium more closely matches the movements in the inflation uncertainty measure in Figure 1. Notably, it moved higher with the upsurges in uncertainty during the past two recessions. This is reasonable given that bond investors will demand greater risk compensation for the higher uncertainty about future inflation during downturns.

Relative to standard methods, our bias-corrected estimates imply that less of the secular decline in long-term interest rates over the past two decades can be attributed to lower risk compensation and reduced uncertainty. Instead, the decline in long rates appears to be driven importantly by lower expectations of far-ahead future inflation and real rates. In addition, our estimated risk premium is countercyclical, rising in recessions and falling in expansions, and follows movements in inflation uncertainty, as conventional wisdom suggests. These results show that correcting for estimation bias is important for understanding the dynamics of interest rates and can lead to results that are more plausible economically.

Bernanke, Ben S. 2013. “Long-Term Interest Rates.” Speech given at the Annual Monetary/Macroeconomics Conference: The Past and Future of Monetary Policy, FRB San Francisco.