Fiscal Headwinds: Is the Other Shoe About to Drop?

Federal fiscal policy during the recession was abnormally expansionary by historical standards. However, over the past 2½ years it has become unusually contractionary as a result of several deficit reduction measures passed by Congress. During the next three years, we estimate that federal budgetary policy could restrain economic growth by as much as 1 percentage point annually beyond the normal fiscal drag that occurs during recoveries.

The current recovery has been disappointingly weak compared with past U.S. economic recoveries. Researchers and policymakers have pointed to a number of potential causes for this unusual weakness, including contractionary fiscal policy. For example, Federal Reserve Vice Chair Janet Yellen (2013) argues that three tailwinds that typically help drive strong recoveries—investment in housing, consumer confidence, and discretionary fiscal policy—have been absent or turned into headwinds this time.

Changes in fiscal policy have been substantial over the past two years, including passage of the Budget Control Act of 2011, which led to sequestration spending cuts. In addition, temporary payroll tax cuts expired and income tax rates for higher-income taxpayers rose following passage of the American Taxpayer Relief Act of 2012. Two important questions are how much has federal fiscal policy been a drag on growth in the recovery to date and to what extent will it affect growth over the next few years? Moreover, is this fiscal drag unusual or part of the normal pattern in which government spending tends to fall and tax collections tend to rise as economic activity gains momentum?

In this Economic Letter, we examine these questions by estimating what fiscal policy would be if it followed historical patterns in the relationship between fiscal policy and the business cycle. We then compare this historically based estimate with actual fiscal policy during the recession and recovery to date. We also look at government projections of fiscal policy over the next three years to see how these compare with estimates based on the historical norm. Finally, we discuss what these trends in federal fiscal policy imply for economic growth.

Historically, fiscal policy tends to be expansionary in recessions. As economic activity slows, tax revenue falls and government spending rises, giving a boost to the economy. The opposite occurs during expansions, as tax revenue rises and government spending falls. Much of this countercyclical pattern is by design. During a recession, so-called automatic stabilizers kick in. These are programs that boost government spending and reduce tax receipts without explicit legislative action. For example, income taxes fall and unemployment insurance and Medicaid automatically rise during downturns, adding to the federal deficit and ideally stimulating economic activity. During upturns, the process automatically reverses as spending on safety net and income-support programs falls and tax revenue rises, trimming the federal deficit.

Much of the analysis of the countercyclical effects of federal fiscal policy only takes these automatic stabilizer programs into account. For instance, the Congressional Budget Office regularly produces estimates of the cyclical component of the federal deficit based on automatic stabilizers (CBO 2013). Yet, automatic programs are only part of the picture. Discretionary fiscal policy, that is, legislated tax and spending changes, often tends to be countercyclical. Congress commonly passes temporary tax cuts or stimulus spending to counteract downturns. Therefore, to fully capture the cyclical effects of government budgetary trends, we consider both automatic stabilizers and discretionary fiscal policy.

To analyze whether recent fiscal policy has followed historical patterns, we use a statistical model of the relationship between fiscal policy and the business cycle based on three variables: government spending other than interest payments, tax revenue, and the difference between the two, which is known as the primary deficit (see Lucking and Wilson 2012). We measure these over time as a share of gross domestic product. We measure the business cycle using the difference between actual GDP and the CBO’s estimate of potential GDP, which is known as the output gap.

Figure 1 compares actual fiscal policy with estimates based on the historical norm for noninterest federal spending, tax revenue, and the primary deficit. It shows that federal fiscal policy was unusually expansionary during the Great Recession. Federal spending grew more and tax receipts fell more than usual, even taking into account the recession’s severe depth and duration, and the resulting very large output gap. This reflects both automatic stabilizers and discretionary changes in spending and tax policy, such as the American Recovery and Reinvestment Act, the economic stimulus program passed by Congress in 2009. As a consequence, federal government saving in the recession fell faster—that is, the deficit grew faster—than our historical norm would predict. 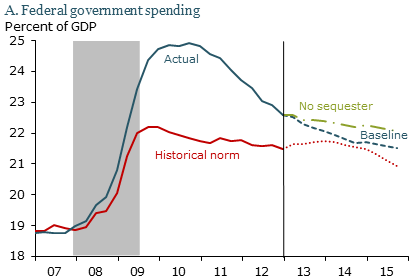 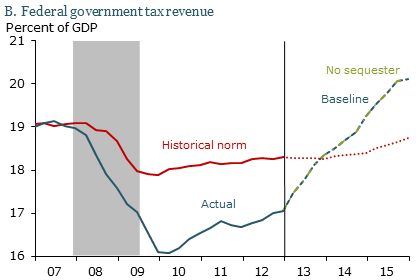 Analysts often measure the “fiscal impetus” of policy, that is, how much policy changes contribute to real GDP growth over a given period. Positive impetus indicates expansionary policy changes and negative impetus, contractionary changes. Thus, fiscal impetus can be thought of as measuring the degree to which policy is a tailwind or headwind for economic growth.

Estimating fiscal impetus has two components. The first is the change in fiscal policy as a share of GDP. The second is the multiplier, that is, the change in GDP caused by a given change in government spending or taxes. Researchers do not agree on what multipliers are most accurate. Here, we use a multiplier of one, which is near the middle of the range of empirical estimates (see Wilson 2012). Doing so allows us to focus on the effects of changes in fiscal policy on fiscal impetus.

Figure 1 shows our calculations of fiscal impetus based on actual and historical-norm estimates of noninterest spending, tax revenue, and the primary deficit. In Figure 1, the vertical line divides our results into two periods: the recovery from mid-2009 to the end of 2012, and the three years through the end of 2015. We refer to the difference between historical-norm and actual fiscal impetus as the excess drag of fiscal policy. The excess drag tells exactly how much fiscal policy is slowing the current recovery beyond the historical norm.

Panel C of Figure 1 shows the actual and the historical-norm primary deficits. The fiscal impetus based on both the actual and historical-norm deficits since the start of the recovery has been identical, −0.2 percentage point per year. In other words, federal fiscal policy has been a modest headwind to economic growth so far in the recovery, but no more so than usual given the weak pace of growth.

To assess whether fiscal policies might cause excess drag in the future, we look at projections through 2015 from the CBO for the output gap, as well as for federal spending, revenue, and the deficit. We base our calculations on the CBO’s February 2013 outlook report, which contained scenarios both with and without the sequestration budget cuts, rather than the most recent May report, which omitted the scenario without sequestration. The results for the scenario including sequestration using the May projections are very similar to those based on the February projections.

Surprisingly, despite all the attention federal spending cuts and sequestration have received, our calculations suggest they are not the main contributors to this projected drag. The excess fiscal drag on the horizon comes almost entirely from rising taxes. Specifically, we calculate that nine-tenths of that projected 1 percentage point excess fiscal drag comes from tax revenue rising faster than normal as a share of the economy. As Panel B shows, at the end of 2012, taxes as a share of GDP were below both their historical norm in relation to the business cycle and their long-run average of about 18%. However, over the next three years, they are projected to rise much faster than our estimate of the usual cyclical pattern would indicate. The CBO points to several factors underlying this “super-cyclical” rise, including higher income tax rates for high-income households, the recent expiration of temporary Social Security payroll tax cuts, and new taxes associated with the Obama Administration’s health-care legislation.

Federal fiscal policy has been a modest headwind to economic growth so far during the recovery. This is typical for recovery periods and in line with the historical relationship between the business cycle and fiscal policy. However, CBO projections and our estimate based on the countercyclical history of fiscal policy suggest that federal budget trends will weigh on growth much more severely over the next three years. The federal deficit is projected to decline faster than normal over the next three years, largely because tax revenue is projected to rise faster than usual. Given reasonable assumptions regarding the economic multiplier on government spending and taxes, the rapid decline in the federal deficit implies a drag on real GDP growth about 1 percentage point per year larger than the normal drag from fiscal policy during recoveries.

Daniel Wilson is a senior economist in the Economic Research Department of the Federal Reserve Bank
of San Francisco.

Congressional Budget Office. 2013. “The Effects of Automatic Stabilizers on the Federal Budget as of 2013.” Report, March.