Social Security Disability Insurance is projected to be insolvent before the end of the decade. How best to restore the program to long-term financial health depends on what has been driving its rapid growth. Demographic shifts and other predictable factors explain part of the increase. But a sizable share reflects increasing participation in the program across population groups. Curbing this growth is important for putting the program back on a sustainable fiscal path.

Social Security Disability Insurance (DI) is a federal benefits program for working-age adults. The number of workers receiving DI increased from 2.9 million in 1980 to 8.8 million in 2012. Population growth explains part of this increase. But DI caseloads as a share of the population age 20 to 64—known as the disability recipiency rate—also have risen rapidly over the past several decades. The Social Security Board of Trustees projects that, absent policy action, DI will be insolvent by 2016. The Congressional Budget Office (CBO 2013) projects a slightly later insolvency date of 2017.

What are the factors that have driven DI growth? And will those factors stay in place or wane? These questions expose sharp disagreements among academics, Social Security actuaries, and disability policy advocates.

Social Security’s Office of the Chief Actuary argues that most of the increase reflects predictable and transitory factors, including an aging population, a growing share of working women eligible for DI, and the increase in Social Security’s full retirement age (see Goss 2013 and Ruffing 2012). The actuaries expect caseload growth to level off as the effects of these factors diminish. Under this scenario, one-time adjustments to revenues or benefits could restore DI’s long-term solvency (see CBO 2012 for a description of possible adjustments to the program).

Other analysts argue that changes in policy and the way DI operates have also driven up caseloads. These changes include more generous benefits, increased access to the program, and the behavior of DI administrators and applicants themselves (Autor and Duggan 2003; Duggan and Imberman 2009; Burkhauser and Daly 2011, 2012; and Rupp and Stapleton 1995). These analysts contend that DI is likely to keep expanding unless program rules and incentives are fundamentally altered.

Figure 1 shows estimates of how three factors external to the DI program contributed to the rise in the recipiency rate: 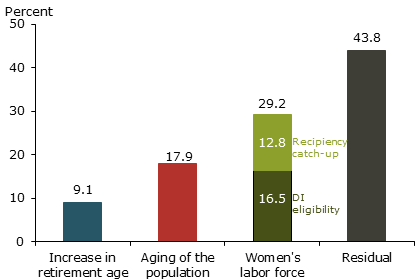 Source: Authors’ calculations based on Social Security Administration (2012) and Bureau of Labor Statistics.

Disability is more prevalent among older people, so an aging population also has boosted recipiency. We estimate how much the overall DI recipiency rate would have increased if only the age distribution of the working-age population had changed. We hold recipiency rates for gender and age groups constant at their 1980 values and let caseloads change as the population share of each gender and age group shifts (see Technical Appendix, for details on this and other calculations). This generates our estimate that an aging population accounts for about 18% of the 1980–2011 recipiency increase, which is consistent with findings of other researchers (for example, Duggan and Imberman 2009).

A final factor pushing up the rolls is the rising percentage of women in the labor force and their increased eligibility for DI. To be eligible, applicants must have had significant past work experience. As women have become more attached to the labor force, their eligibility for DI has risen. To estimate this impact, we apply the same method used to quantify the impact of an aging population, holding the recipiency rate for women constant at the 1980 level and letting caseloads evolve with women’s rising eligibility. We find that women’s increased eligibility accounts for about 16% of the 1980–2011 disability recipiency increase, also consistent with other research.

Notably, in 1980, women’s DI recipiency rate was well below that of men, even after accounting for the lower eligibility of women. Analysts don’t agree on what explains this gap. Some argue it reflects underlying health differences between men and women. Others maintain that women eligible for DI were not representative of the entire population of women in 1980 and that a representative sample of women would have had a recipiency rate similar to men’s.

Overall, we find that factors outside of the DI program account for 43% to 56% of the DI recipiency rise since 1980, depending on how much we assume women’s recipiency catches up to men’s. Our finding that these factors explain roughly 40% to 60% of recipiency growth over the past three decades is consistent with previous analyses (see, for example, Duggan and Imberman 2009 and Goss 2013). 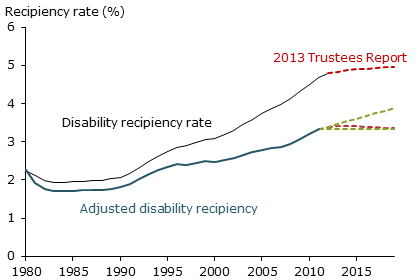 Source: Authors’ calculations based on data from the Bureau of Labor Statistics, U.S. Census Bureau, Social Security Administration (2012), Stephens and Thomas (2011), and Board of Trustees of OASDI (2013).

Our analysis finds that a significant fraction of growth in the DI rolls since 1980 remains unexplained. Two possible explanations are changes in the operation of the program and the value of benefits, according to analysts. In 1984, Congress expanded the ways workers could qualify for DI benefits. The program’s eligibility criteria shifted from a list of specific impairments to a more general consideration of a person’s ability to work and medical condition, including pain and other symptoms. Consequently, the proportion of beneficiaries approved based on more subjective vocational or functional criteria grew from 24.6% in 1984 to 54.3% in 2010 (Social Security Advisory Board 2012).

Additionally, over the past 20 years, the relative value of cash benefits has risen for low-wage workers. Autor and Duggan (2003) show that the combination of rising income inequality and the indexation of benefits by the average wage level increased the extent to which DI payments replaced wages for low-paid workers. The rising replacement rate has made DI benefits more attractive for low-wage workers and has probably amplified DI’s sensitivity to the business cycle. 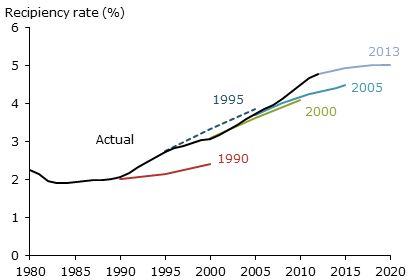 Source: Authors’ calculations based on Board of Trustees of OASDI (various years), Bureau of Labor Statistics, and U.S. Census Bureau.

Figure 2 plots the historical disability recipiency rate, the rate adjusted for transitory factors noted above, and the Social Security Administration’s projections of future caseload growth, shown by the red dotted lines. We estimate Social Security’s projection of the adjusted rate using detailed age-gender projections estimated by Stephens and Thomas (2011) and the most recent caseload projections as shown in Board of Trustees of OASDI (2013). The figure also shows our estimate of the uncertainty around Social Security’s projections, based on historical adjusted caseload growth, shown by the dashed green lines. The higher green line shows how the adjusted recipiency rate would evolve if it continued to increase at its average pace from 1990 to 2010. We choose those years to exclude the effects of significant policy changes in the 1980s. The lower green line represents the scenario in which recipiency adjusted for age and gender peaks in 2011, the last year for which we have the necessary data, and then flattens. In both cases, we assume population ages according to Census Bureau projections.

Our breakdown of DI caseload growth over the past three decades indicates that between 43% and 56% of it can be attributed to one-time factors that have largely run their course and are unlikely to put pressure on SSDI caseloads in the future. This leaves a significant residual fraction between 44% and 57% that is unaccounted for. This portion of DI growth could increase rapidly and push recipiency well beyond SSA’s projections. Thus, understanding these unexplained factors behind DI’s caseload growth is vital for policymakers seeking solutions to the DI program’s impending insolvency.

Jonathan A. Schwabish is a principal analyst at the Congressional Budget Office.

Burkhauser, Richard V., and Mary C. Daly. 2011. The Declining Work and Welfare of People with Disabilities: What Went Wrong and a Strategy for Change. Washington, DC: The American Enterprise Institute for Public Policy Research.

Duggan, Mark, and Scott Imberman. 2009. “Why Are the Disability Rolls Skyrocketing? The Contribution of Population Characteristics, Economic Conditions, and Program Generosity.” In Health at Older Ages: The Causes and Consequences of Declining Disability among the Elderly, eds. David Cutler and David Wise. Chicago: University of Chicago Press.

Ruffing, Kathy A. 2012. “Social Security Disability Insurance Is Vital to Workers with Severe Impairments: Program’s Growth Largely Due to Demographic Factors; Financing Should Be Addressed as Part of Overall Solvency.” Center on Budget and Policy Priorities, August 9.

Opinions expressed in this FRBSF Economic Letter are those of the authors and do not necessarily reflect the views of the Congressional Budget Office, the Federal Reserve Bank of San Francisco, or the Board of Governors of the Federal Reserve System.