Medical-care expenditures have been rising rapidly and now represent almost one-fifth of all U.S. economic activity. An analysis of the privately insured health-care market from 2003 to 2007 indicates that higher prices for medical services contributed largely to nominal spending growth, but did not greatly exceed general overall inflation. In addition, the quantity of services consumed per episode of treatment did not grow during this period. Instead, most of the rise in inflation-adjusted medical-care spending reflected a higher percentage of insurance enrollees receiving treatment.

The United States spends more per capita on health care than any other developed country. In 2010, health care accounted for more than 17% of gross domestic product (GDP), more than double the average of other developed countries. In addition, the pace of health-care spending growth has been rapid, outpacing overall GDP growth. The Centers for Medicare and Medicaid Services (CMS) projects that, by 2020, health-care spending will total $4.64 trillion, representing approximately 20% of GDP (Keehan et al. 2011). Understanding the source of this growth is essential to control costs, or “bend the cost curve,” without sacrificing access to care or quality.

This Economic Letter summarizes recent research (Dunn, Liebman, and Shapiro 2012a, b, c) that pinpoints the distinct sources of medical-care spending growth in the employer-sponsored and private health insurance market. The privately insured health-care market is economically important. Total spending for employer-sponsored private health insurance was $709 billion in 2011 (Gaynor and Newman 2012), which was approximately 30% more than Medicare outlays that year. Unlike the Medicare market in which CMS fixes payments to providers, private-sector prices are set through negotiations between insurers and providers. As a result, those prices are sensitive to competitive factors. Thus, spending growth in the privately insured market can stem from a multitude of sources, including growth in negotiated services prices.

From 2003 to 2007, medical-care expenditures per enrollee grew 28%, an average of 6.3% annually, faster than the 20% growth in nominal per capita GDP. Spending may have grown so rapidly relative to GDP for a few reasons. The growth-accounting framework of Dunn, Liebman, and Shapiro (2012a, b, c) tracks four potential sources of this growth: One, the prices of procedures may be outpacing general price inflation. Two, patients may be receiving a higher quantity of services for treatment. Three, a higher percentage of enrollees may be seeking medical care. Four, the population of insured individuals may be aging.

Dunn, Liebman, and Shapiro (2012a, b, c) assess these components by analyzing retrospective claims data contained in the Thomson Reuters MarketScan research database for a sample of employer-sponsored and privately insured patients. These data provide payment information from employer and health-plan sources, and contain medical and drug data for several million commercially insured individuals, including employees, spouses, and dependents. The data were then processed using the Ingenix Symmetry program, which assigns each claim to a particular condition category and episode of care. Specifically, illnesses, injuries, and other conditions requiring medical care are classified by condition groupings and severity. The episode of care for a particular patient with a specific condition begins at the time of initial treatment and ends at final treatment. 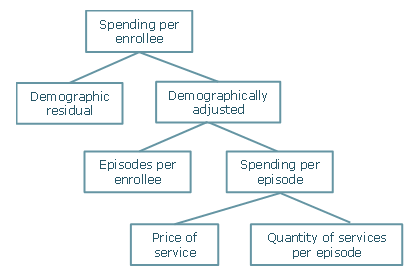 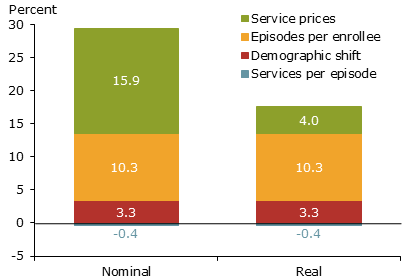 Figure 2 shows growth in these individual components of medical-care spending. The index representing spending per enrollee increased 28% between 2003 and 2007, meaning that overall medical-care spending grew approximately 6.3% annually. Episodes per enrollee increased 10.3% over the four-year period, while medical-care prices grew 15.9%, or 3.8% annually. Notably, price growth for medical-care services was not much higher than inflation in the overall economy. The personal consumption expenditure price index, a widely followed inflation measure, rose 11.5% over our sample time frame. Adjusting for inflation, real medical service prices rose only 4% over the period.

Figure 2 also shows that the quantity of services consumed per episode did not change over the sample period. This suggests that substituting more expensive procedures, lengthening office visits or hospital stays, or adding more procedures are not contributing to spending growth. Rather, an increase in the proportion of enrollees receiving treatment is driving most real spending growth. It should be noted that this accounting methodology is not able to determine whether more enrollees are getting treatment because a larger percentage of them are getting ill, more of them are realizing they are sick, or more treatment options are available.

To get a better sense of which types of diseases are contributing to growth, Dunn, Liebman, and Shapiro (2012b) report growth patterns for specific condition categories. Each category is calculated as a weighted average of the many underlying condition indexes in that category. Condition indexes track growth in prices, utilization, and prevalence at the condition level. Figure 3 breaks down growth between 2003 and 2007 for the four largest condition categories: orthopedics, cardiology, gastroenterology, and gynecology. It also analyzes conditions grouped into the preventive-care category, which includes routine checkups. These five categories represented approximately half of all spending in 2003. 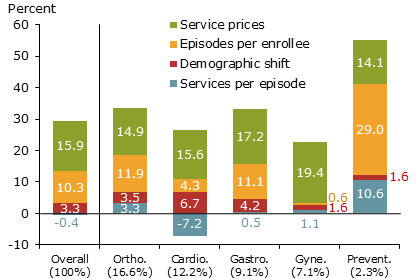 An analysis of the components of medical-care expenditures indicates that spending growth in the privately insured market is being driven by the number of treated enrollees as opposed to the cost of treatment. In fact, patterns of utilization of medical services held spending growth in check. This is most evident for cardiology conditions, in which the quantity of services per episode of care declined sizably over the sample period.

Thus, “bending the cost curve” does not necessarily imply reducing growth in the cost of treatment. Rather, it may also imply slowing the growth in the number of enrollees receiving medical treatment. Treatment growth is most pronounced for preventive care. But we are skeptical that holding down growth in this area would be beneficial. In fact, a higher percentage of enrollees receiving preventive treatment may lead to lower expenditures in the future, better health outcomes, or both. Ultimately, more research is needed to determine which forms of spending growth are wasteful and which are productive in terms of health outcomes.

A shift from inpatient to outpatient services has caused utilization of services for certain conditions to decline. At the same time though, some areas, such as cancer treatment, have seen growth in both service utilization and prices. In the case of cancer, we hypothesize that cost growth reflects extensive innovation in treating malignancies. A more comprehensive study of cancer treatment would lead to a better understanding of the rising costs in this area.

Adam Shapiro is an economist in the Economic Research Department of the Federal Reserve Bank of San Francisco.