Crises Before and After the Creation of the Fed

The Federal Reserve was created 100 years ago in response to the harsh recession associated with the Panic of 1907. Comparing that recession with the Great Recession of 2007–09 suggests the Fed can mitigate downturns to some extent. A statistical analysis suggests that if a central bank had lowered interest rates during 1907 panic the same way the Fed did during the 2008 financial crisis, gross domestic product would have contracted two percentage points less than it actually did.

This year marks the 100th anniversary of the Federal Reserve System. Two of the Fed’s main duties are acting as lender of last resort in times of crisis, and promoting stable prices and full employment through monetary policy. Few would challenge the Fed’s recent record at controlling inflation. But many question the effectiveness of the Fed’s emergency response to the 2007–08 financial crisis and the recession associated with it. The Federal Reserve was itself born out of the Panic of 1907, a financial crisis that bears a striking resemblance to the one that occurred almost exactly 100 years later. This Economic Letter examines the Fed’s crisis management response in this historical context.

The more things change, the more they stay the same

Can you identify when the following events took place? Early in the year, the stock of a nonbank financial institution widely used as collateral in certain transactions drops by more than half. At first, financial markets shrug it off. But, during the summer, with market distress apparently in check, two new financial challenges arise. Shortly after that, a nonbank financial institution fails and panic strikes financial markets. Meanwhile, a giant financial company is also in trouble, but considered salvageable. A deal is struck. Market participants bet that the rescue will keep other financial dominoes from falling. Disaster is avoided, but not without major damage to the real economy in the form of a protracted recession.

If you thought this scenario describes the 2008 financial crisis, you would be right. You would have identified Bear Stearns as the company whose stock took a hit early in the year, Fannie Mae and Freddie Mac as the two challenges that surfaced in the summer, Lehman Brothers as the nonbank financial institution that collapsed shortly after that, and AIG as the financial giant that was rescued. However, the scenario also describes events that took place a century earlier. Replace Bear Stearns with Union Pacific, Fannie Mae and Freddie Mac’s failures with the crash of copper prices and New York City bonds, Lehman Brothers with the Knickerbocker Trust Company, and AIG with the Trust Company of America, and you would precisely identify the panic of 1907.

The events surrounding both crises were remarkably similar. But the institutional responses to these events were vastly different. The lack of a central bank in 1907 meant there was no public lender of last resort. Instead, J. Pierpont Morgan, a private investor and founder of J.P. Morgan & Co., orchestrated the rescue effort in 1907. In 2008, it was federal government agencies, especially the Federal Reserve and the Treasury Department, that responded to the crisis.

Origins of the Federal Reserve

Recessions originating from a financial event were common in the late 19th and early 20th centuries. Many stemmed from banking panics. Figure 1 provides a global historical perspective. We calculate by decade the number of countries that experienced financial crises among a sample of 17 industrialized economies representing more than half of global GDP during the past 140 years (for details, see Jordà, Schularick, and Taylor 2012). 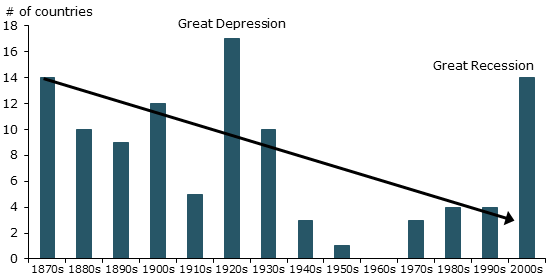 Figure 1 shows a notable downward global trend in the incidence of these highly disruptive events, with the conspicuous exceptions of the Great Depression and the Great Recession of 2007–09. In the United States, the rate of banking crises declined markedly after the 1913 creation of the Federal Reserve System. Other than the Great Depression and Great Recession, the only significant banking crisis of the past century was the savings and loan crisis. By contrast, ten significant banking crises occurred in the 19th century.

The panic of 1907 and the resulting recession are generally credited with providing the catalyst for the creation of the Federal Reserve System. When the Federal Reserve was chartered, the United States had been without a central bank for about 70 years. Congress chartered The First Bank of the United States in 1791 during the Washington presidency, under the guiding hand of Secretary of Treasury Alexander Hamilton. However, its 20-year charter was allowed to expire in 1811. Then, under President Madison, the Second Bank of the United States was created in 1817 for another 20-year period. Once again, the charter was allowed to expire amid President Jackson’s strong opposition to the central bank.

For the next 70 years, a period known as the Free Banking Era, no national public authority policed the banking system. Banks, which earned their livelihood from the creation of money and credit, were entrusted to regulate the system’s excesses. This period was punctuated by eight banking crises (Reinhart and Rogoff 2009).

(The Federal Reserve Bank of San Francisco exhibits currency privately issued by banks during this period as well as the rare and valuable Grand Watermelon note and an 1886 $1 silver certificate with a portrait of Martha Washington, the only woman ever to appear on American currency. See the American Currency Exhibit).

Charles Kindleberger’s 1978 classic Manias, Panics and Crashes asked whether a lender of last resort moderates the business cycle (see Kindleberger, Aliber, and Solow, 2011). His tentative answer was “that a lender of last resort does shorten the business depression that follows a financial crisis.” Taking Kindleberger’s proposition more broadly, we compare a U.S. recession without a central bank with a downturn in which the Federal Reserve was actively working to protect the financial system and stimulate the economy: the 1907 Panic and the 2007–09 financial crisis and recession. Figure 2 compares real GDP per capita in the United States around those two events. 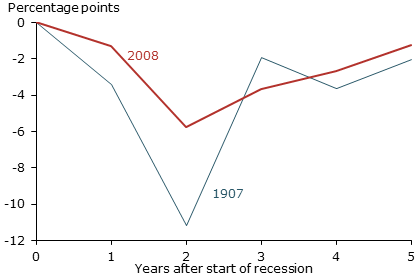 We can also compare the path of unemployment after each crisis. If unemployment had increased at the same rate in the second year of the Great Recession as during the downturn associated with the 1907 Panic, a rough estimate indicates that the total number of unemployed people in 2009 would have been about 2.5 million higher than the 14.3 million actually observed. It is natural to wonder whether the recession associated with the 1907 Panic would have been shallower had we been able to transport the Federal Reserve back in time.

Although J.P. Morgan acted as a de facto lender of last resort, the absence of a de jure government institution that could play this role probably aggravated the panic. However, counterfactual historical analysis is difficult because we cannot conduct a controlled experiment. Many factors contributed to the actual course of events. The absence of a central bank was far from the only distinction between the recession associated with the panic of 1907 and the Great Recession of 2007–09.

Modern statistical methods provide one way to tease out the effects of different macroeconomic factors. Using a comprehensive historical database, Jordà et al. (2012) examine the determinants of financial crises and their cyclical patterns. Their model explores the dynamics of the economy once a financial crisis strikes, permitting comparison of events across eras and countries.

The experiment we conduct focuses on monetary policy. In 1907, no official monetary authority existed and short-term interest rates were set by the market. By contrast, during the recent recession, the Federal Reserve aggressively lowered its benchmark interest rate from 5.25% to near zero by December 2008. Would the drop in real GDP per capita associated with the 1907 Panic have been less severe if interest rates had been cut the same way?

Using the Jordà et al. (2012) model, we can compare the actual path of short-term interest rates on government securities with the model’s prediction for those rates. Although these rates may not give an accurate picture of the rates actually levied on businesses and households, they give a good sense of changes in overall credit conditions. Comparing the model’s predictions with actual outcomes provides an indirect measure of the effects of policy intervention.

After the first year of recession, short-term interest rates were about one percentage point above what the model predicts for the 1907 episode, but about two percentage points below the model’s prediction for the Great Recession. This appears to reflect the Fed’s aggressive rate-cutting response to the financial crisis. In fact, this general pattern of rates higher than predicted for the 1907 crisis and lower than predicted for the Great Recession characterizes the five-year windows for both periods.

Using the difference between interest rates predicted by the model and actual rates, we can impose the effect of the Fed’s rate reductions in 2007 and 2008 on the 1907 crisis. To do this, suppose that the interest rate prediction errors in 1907 were the same direction and size as those in the Great Recession. How would the path of real GDP per capita after the 1907 Panic have changed? If interest rates had been cut in the same way as they were in 2007 and 2008, the contraction in real GDP per capita would have been about two percentage points less in the second year. This may seem small, but two percentage points is about the average loss of per capita real GDP during a typical recession. If per capita GDP had fallen by an additional two percentage points in 2009, over one million more jobs would have been lost. The stimulus package passed in 2009 did not take full effect until 2010. So differences in the recovery path cannot be explained by differences in fiscal policy.

The duties and authority of the Federal Reserve System, established by the Federal Reserve Act of 1913, have evolved continuously to keep pace with an ever-more-complex financial system. Financial crises have become less frequent since 1913, but they have not been completely eliminated. The presence of the Fed as monetary authority and lender of last resort distinguishes the financial crisis of 2007–08 from the 1907 Panic. In the recession associated with the recent financial crisis, losses in economic activity and employment were less severe. When other functions not examined here are considered, such as price stability, the success of the Federal Reserve in mitigating recessions is clearer. The financial landscape of the next 100 years will continue to evolve. We can be certain that, in its second century, the Fed will have to meet new challenges yet unknown.

Òscar Jordà is a research advisor in the Economic Research Department of the Federal Reserve Bank of San Francisco..