The Federal Reserve has indicated that it may raise the federal funds rate from its current value near zero in 2015. This forward policy guidance is broadly consistent with expectations from business surveys on the most likely timing for the funds rate liftoff. It also appears in line with estimates of policy liftoff from forward interest rates derived from Treasury yields. However, in interpreting forward rates, it is important to account for the zero lower bound on interest rates.

In December 2008—in the midst of a deepening recession—the Federal Reserve lowered the federal funds rate, its traditional tool for monetary policy, to essentially its zero lower bound. Especially recently, a persistent question has been when this key overnight policy rate will be raised. The timing of the initial increase depends critically on the strength of the recovery and the behavior of inflation, so predicting this so-called liftoff requires forecasts of macroeconomic conditions. Conversely, medium- and longer-term interest rates are determined in part by expectations of the future policy rate. Thus, changes in the expected liftoff date affect a wide range of current interest rates and financial conditions. These, in turn, alter household and business spending decisions and the pace of economic growth.

Consequently, gauging the expected timing of the funds rate liftoff is of keen interest to both policymakers and the public. The Federal Reserve’s policymaking body, the Federal Open Market Committee (FOMC), has described its expectations of the timing of that liftoff and the prevailing macroeconomic conditions. The FOMC also has provided numerical forecasts of the appropriate path for the federal funds rate after it rises above its lower bound. If these communications, part of the FOMC’s unconventional monetary policy known as forward policy guidance, can help align the public’s expectations of future policy with policymakers’ views, then it may help monetary policy be more effective (Rudebusch and Williams 2008). Furthermore, this forward guidance is likely to be especially valuable now, when the federal funds rate is constrained by the zero lower bound.

To assess the effects of forward policy guidance, we first must gauge the public’s expectations about future policy liftoff. This Economic Letter considers measures of these expectations from two sources: surveys of business economists and forward interest rates derived from Treasury yields. However, we caution that forward rates cannot be used without some adjustment because they can be misleading near the zero lower bound. That is, because interest rates generally do not drop below zero, the distribution of expected future interest rates is asymmetrical. To account for this asymmetry, we calculate liftoff expectations from Treasury yields using models that respect the lower bound and incorporate macroeconomic information. Interpreted correctly, both the survey and market measures of policy liftoff appear generally consistent with the FOMC’s formal guidance.

Since the federal funds rate was lowered to essentially zero, the FOMC has provided explicit guidance about the future path of the funds rate. Recent FOMC statements indicate that the Committee intends to hold the federal funds rate near zero at least until the unemployment rate falls below 6.5%—provided that near-term inflation forecasts do not exceed 2.5% and long-term inflation expectations remain well-anchored. This FOMC communication explicitly ties the likely future path of the policy rate to numerical measures of economic outcomes.

Past research suggests that the FOMC forward policy guidance has influenced public expectations about future policy (Campbell et al. 2012). Given the importance of the latest FOMC communications about liftoff, it is natural to ask whether the FOMC’s views line up with expectations from surveys. In the September 2013 Blue Chip Economic Indicators survey of business economists, the consensus unemployment rate forecast for the fourth quarter of 2014 was 6.8%. A simple extrapolation of the survey’s forecast path suggests that the unemployment rate should drop below the FOMC’s 6.5% threshold around the middle of 2015. These business economists further indicated that the third quarter of 2015 is the most likely time for liftoff. Additional surveys of private-sector economists conducted by the Wall Street Journal, Bloomberg, and others paint a similar picture of liftoff expectations. 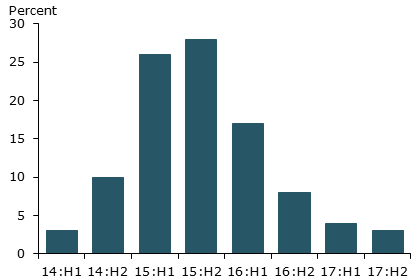 A useful survey that contains more detailed information about monetary policy expectations is the Survey of Primary Dealers, which is conducted by the Federal Reserve Bank of New York. This survey polls Wall Street economists, whose views are likely a good reflection of the expectations of financial market participants more broadly. In the September 2013 survey, the respondents indicated that the third quarter of 2015 is the most likely quarter for liftoff. Interestingly, the survey also reports the economists’ views on the distribution of liftoff, namely, the likelihood of a policy liftoff occurring at a variety of different dates. Figure 1 displays these probabilities for each half-year, ranging from the first half of 2014 to the second half of 2017. While 2015 is viewed as the most likely year for liftoff, responses also acknowledged a significant chance of an earlier or later liftoff.

Taken together, the various surveys appear consistent with the FOMC’s forward guidance. Furthermore, Figure 1 shows that some uncertainty regarding liftoff remains, presumably reflecting in large part that future policy actions depend heavily on incoming data, as emphasized by the FOMC.

Liftoff expectations from the yield curve

Interest rates also contain information about the liftoff horizon expected by financial market participants. All else equal, a more distant liftoff pushes down the average expected path of the federal funds rate and implies lower interest rates. Of course, all else is usually not equal. In particular, interest rates also contain a premium to compensate investors for taking on the risk of investing their money in an asset of uncertain future value. This risk premium weakens the link between funds rate expectations and interest rates. However, the risk premium tends to be small at shorter horizons, so interest rates of shorter maturities should provide fairly reliable readings on the timing of a liftoff even ignoring the risk premium.

How can we infer the timing of liftoff from interest rates? Assuming a negligible risk premium, forward rates derived from Treasury yields would exactly reflect the expected future value of the policy rate across different horizons. One might then be inclined to estimate liftoff as the horizon when forward rates first exceed a certain threshold near zero, say 0.25 percentage point. However, this approach ignores the fact that near zero, the expected value is not equal to the most likely value, known in statistics as the “modal” value, of the future policy rate. Because the policy rate cannot drop below zero, the distribution of future policy rates is very asymmetric, and the mean, or expected value, is generally higher than the mode, or most likely value, of this distribution. As a result, the approach we just described will generally underestimate the time until liftoff given by the FOMC or business surveys, which report modal forecasts.

Figure 2
Forward rates and modal path in May 2013 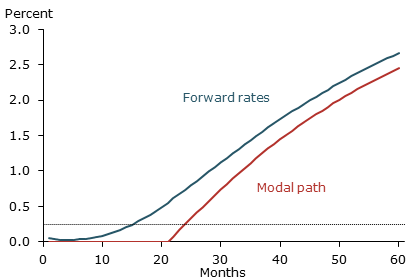 A more accurate way to estimate liftoff from the yield curve is to use the modal path for the policy rate, which represents its most likely outcome across horizons. To find the modal path we use a statistical model for the yield curve and incorporate information from both yields and macroeconomic data (Bauer and Rudebusch 2013). We can estimate the liftoff horizon simply and accurately using the modal path based on our model, and we find that our estimates are statistically close to optimal.

To illustrate the difference between the two market-based approaches we’ve described, Figure 2 displays the path of forward rates and the modal path at the end of May 2013. The horizontal line at 0.25 percent corresponds to the upper level of the target range that the FOMC has set for the federal funds rate. The measure based on forward rates first crosses this threshold at 16 months, which corresponds to estimated liftoff in September 2014. By contrast, the modal path crosses the threshold much later, at a horizon of 25 months, which would put liftoff at June 2015. In general, the liftoff calculated from forward rates is always earlier than the liftoff estimated from the modal path. In this particular case, the estimate based on the modal path is much more plausible, more closely matching the forecasts of survey participants and policymakers. 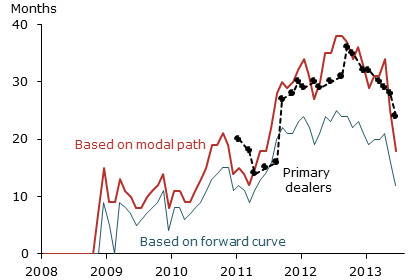 To compare alternative measures of the liftoff horizon over time, Figure 3 plots three estimates starting in 2008 and ending in June 2013. Our preferred estimates based on the modal path (thick red line) track the expectations from the Survey of Primary Dealers (black dotted line) quite closely. The estimates based on forward rates (thin blue line) are typically lower than the other two measures, and show a larger discrepancy in 2012 and early 2013 when interest rates were particularly low and the asymmetry described earlier was very pronounced.

An interesting feature of the liftoff estimates in Figure 3 is their increase in mid-2011. Around that time, forward guidance by the FOMC pushed out the public’s expectations for funds rate liftoff (Swanson and Williams 2012). Our estimates based on the modal path show that the liftoff horizon increased further until late 2012, in line with the weakness of the recovery and increasing downside risks to the economic outlook at the time. Beginning in late 2012, the estimated liftoff horizon decreased, due to both the passage of time and more upbeat economic data. The most recent data in the figure show that the market-based estimates for the liftoff horizon fell more than the survey-based horizon. During this recent episode, interest rates increased substantially, likely because various market dynamics amplified more limited moves in expectations about monetary policy.

When interpreting interest rates to learn how soon markets expect the Federal Reserve to begin raising its policy rate, it is important to avoid misleading results. Instead of considering the first horizon when forward rates exceed the threshold for liftoff, one should focus on when the modal path—that is, the most likely path—of the policy rate crosses the threshold. Otherwise the pronounced asymmetry of interest rates, which is a fundamental characteristic of the zero lower bound environment, is ignored. An estimated modal path can be obtained from statistical models of the yield curve, which is the approach we pursue here, or alternatively from prices of interest rate options (see Malz 2013).

While market-based measures of liftoff can be affected by various factors that cause interest rate volatility, these measures are generally in line with survey-based estimates. Our estimates suggest that the FOMC’s forward guidance has been effective in pushing out the expected liftoff horizon, which has contributed to lower interest rates, easing financial conditions and adding stimulus to the economy. Recent estimates of policy liftoff generally suggest the first funds rate hike will occur sometime in 2015.