The term structure of interest rates—rates at the full range of maturities—is vitally important to investors, policymakers, and market observers. Financial market focus on the term structure, also known as the yield curve, is particularly intense now since it reflects the trajectory of economic recovery and prospects of a shift in Federal Reserve monetary policy to a less stimulative stance. One place to look for market views on these issues is interest-rate derivatives markets, where traders put money at risk by taking positions in instruments linked to interest-rate movements.

This Economic Letter describes implied correlations among interest rates, a set of indicators of market uncertainty about and exposure to the future slope of the yield curve based on interest-rate derivatives. Each rate correlation expresses the collective views of market participants on the future spread between two points on the term structure. As a market-based estimate of uncertainty about the future slope of the yield curve, implied rate correlations can shed light on what policy moves market participants expect the Fed to make.

Implied rate correlations are derived from the prices of swaptions and yield curve options. Swaptions lock in the right to pay or receive a stipulated fixed interest rate, known as the strike rate, in a swap when the option expires. Curve options pay off if the spread between two interest rates with different maturities is above or below a stipulated strike level on expiration. Combining the information in the prices of these types of options offers an implied view on whether short- and long-term rates will tend to move together.

A curve option is a cap or floor on the spread between two constant maturity swap rates with different terms. Its payoff is determined by the difference between the option strike and the swap rate spread at the curve option’s expiration. An example is the 10-year minus 2-year curve option expiring in one year, or “1-year 2s-10s.” If such an option is struck at 250 basis points, that is 2.50 percentage points, it pays the owner 0.0001 times the notional underlying amount multiplied by the amount by which the spread between 2- and 10-year swap rates exceeded 250 basis points in one year, provided that number is positive. If the constant maturity swap spread were 275 basis points in one year and the notional amount were $1,000,000, the option writer would pay $2,500.

Curve options were first traded in the early 2000s. Participants included retail, corporate, and other investors selling yield curve volatility, and hedgers such as insurance companies. In the years preceding the financial crisis, hedge funds and others expressing views on the yield curve entered the market. Dealers are mainly large banks. They describe liquidity as good, in that prices are consistent across dealers, for options up to one year and for standard curve spreads such as the 10-year minus 2-year. 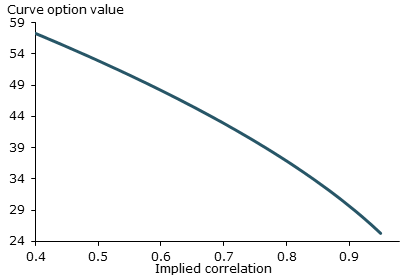 Curve option prices express implied rate correlations, that is, market estimates of uncertainty about the future term spread. For example, the price of the 1-year 2s-10s option expresses the views of market participants on how the 2s-10s swap-rate spread will change over the next year. These implied rate correlations can be thought of as extending to the shape of the yield curve the notion of interest-rate implied volatility, which is the market estimate of the magnitude of rate fluctuations over an option’s life.

A decline, say, in the 1-year implied correlation between changes in the 2- and 10-year rates might be driven by greater uncertainty about the path of short-term rates over the next three years, uncertainty about long-term rates, or both. Rate correlation doesn’t indicate what form such changes will take. It might be a steepening or flattening of the term structure, and could coincide with either a rise or fall in the general level of interest rates.

As with any market-derived indicator, implied rate correlations may contain risk premiums. If some market participants are particularly anxious to protect against a big change in the term structure, curve options may be more expensive and implied correlation lower than they would be based only on participants’ beliefs about its future shape (see Driessen, Maenhout, and Vilkov 2009 on equity market correlation risk premiums). 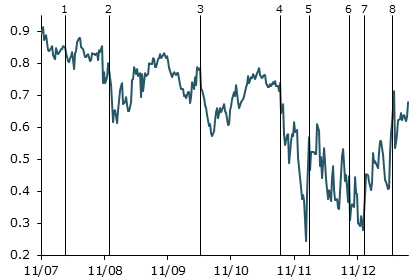 Implied rate correlations gravitate to 1, since the market generally expresses stronger views on changes in the level of the yield curve than its slope, particularly for longer-term segments such as five to ten years. Implied correlations have fallen since the Fed initiated its highly stimulative policy responses to the global financial crisis, and have varied over time in ways that help illuminate the impact of the Fed’s communication and asset purchase policies (see Bauer and Rudebusch 2013 and Rosa 2013).

The Lehman bankruptcy, the introduction of the federal government’s capital injection and debt guarantee programs for financial institutions, and the Fed’s announcement of its first large-scale asset purchases preceded a particularly sharp implied correlation decline in late 2008. As the financial crisis subsided in mid-2009, implied rate correlations rose a bit. But the onset of the European sovereign debt crisis in April 2010 and the announcement of the first collective European response on May 9 were followed by a further sharp drop as prospects for economic recovery dimmed and expectations of further monetary easing grew.

Forward guidance is the Fed’s policy of publicly communicating its likely future monetary stance. In August 2011, the Fed’s policy committee adopted forward guidance based on estimates of the date when it would begin raising short-term rates. Following the announcement, implied rate correlations dropped to the lowest levels in the data. By announcing its intention to maintain policy rates near zero until a specified date, the Fed essentially pinned the short end of the yield curve, to the extent market participants regarded the guidance as credible. Longer-term rates remained outside the guidance window. They were influenced by current and anticipated asset purchases, as well as the path of short rates. Evolving economic conditions and the Fed’s anticipated changes to its asset purchase program were then seen as likely to affect longer-term rates disproportionately. This fostered expectations of changes in the slope rather than parallel shifts in the yield curve.

Contrasts between the 2s-10s and 5s-10s implied correlations offer additional perspectives on how markets interpreted Fed communications. While the introduction of forward guidance spurred an immediate drop in 2s-10s correlation, 5s-10s correlation initially rose. Market participants apparently believed that, since both 5- and 10-year rates were well outside the guidance time frame, both would respond similarly to news. But 5s-10s correlation soon dropped sharply, particularly after the Fed extended forward guidance into 2014 and 2015, pinning much of the yield curve with maturities below five years.

Implied rate correlations have increased since the Fed introduced open-ended asset purchases in September 2012 and forward guidance based on macroeconomic conditions in December 2012. These initiatives suggested that monetary policy would remain highly stimulative until the economy improved substantially and that stimulus reduction was not tied to specific dates. With adoption of these policy tools, parallel shifts in the yield curve may have appeared more likely to investors than changes in slope because both policy and longer-term rates would depend on expectations regarding the economy, which would be influenced by new data.

Higher implied correlations suggest that market participants found this form of communication credible and perceived that stimulus would be reduced only when economic conditions improved. The 5s-10s correlation rose on introduction of open-ended asset purchases, which lowered the likelihood of longer-term rates rising, and thus the term structure steepening, in the absence of stronger data. The 2s-10s correlation rose and the 5s-10s correlation rose further when threshold-based guidance was introduced, making policy at both the short and long ends of the yield curve dependent on incoming data. The correlation increase adds perspective to other market-based evidence that rates at both ends of the term structure would be held down until recovery, such as the stock market rally since the end of 2012 and an only slight increase in the implied volatilities of swaptions expiring near the Fed’s previous estimates of the earliest dates when short-term rates might begin to rise.

The trend toward higher implied rate correlations accelerated after Chairman Bernanke indicated in May 2013 that the pace of asset purchases could slow later in 2013, possibly suggesting that a recovery strong enough to lift both short- and long-term rates was more likely. The jump in implied correlations may also indicate that market participants did not fully appreciate that Fed asset purchases and changes in the policy rate are distinct tools, and that policy rates could remain low after asset purchases slowed if the data improved but did not reach the Fed’s guidance thresholds.

Financial markets offer several sources of data on expectations and perceived risk of interest-rate changes. The yield curve is an indicator of the future path of short-term rates. Swaption and bond implied volatility is a measure of uncertainty about future rates. The skew of implied volatility provides information about probable—or feared—interest rate movements. Implied rate correlations represent an additional source of information, showing market views on the uncertainty of the term structure.