Gauging the Momentum of the Labor Recovery

Federal Reserve policymakers are watching a broad set of indicators for signs of “substantial” labor market improvement, a key consideration for beginning to scale back asset purchases. One way to find which are most useful is to focus on how well movements in these indicators predict changes in the unemployment rate. Research suggests that six indicators are most promising. They offer evidence that the recovery has more momentum now than a year ago, a strong signal that the labor market is improving and could accelerate in coming months.

In its September 2012 meeting, the Federal Reserve’s policymaking body, the Federal Open Market Committee (FOMC) announced it would make monetary policy decisions conditional on substantial improvement in the outlook for the labor market (Bernanke 2012). Since then, many researchers have looked at a large set of labor market indicators to determine which might offer the best guidance for this criterion (Federal Reserve Bank of Atlanta 2013, Hakkio and Willis 2013, Stehn 2013). All of these studies have focused on coincidental measures that capture the current state of the labor market or the current rate at which conditions are improving. By contrast, we look for indicators that signal future improvements in the labor market, particularly in the unemployment rate. This allows us to characterize the degree of momentum underlying the labor market recovery and make statements about the outlook for the labor market in coming months.

We begin by considering a wide array of data on labor market conditions in the United States. This includes information on employment, unemployment, the rate at which people quit existing jobs, the number of people who get hired, employers’ perceptions of the ease of filling their job vacancies, and workers’ sentiment about the state of the overall labor market. Because each of these series comes from a different source, comparing them requires putting them on equal footing in terms of how they’re measured. We do this by normalizing each indicator, as well as its 6-month change, to reflect how much it deviates from its own historical average at any point in time. In particular, we perform a statistical test by measuring how many standard deviations an indicator is from its historical average. The normalized six-month change in an indicator gives us a sense of whether it has a persistently strong correlation with the unemployment rate. We call this persistence number “momentum.” Finally, to make these data easier to compare, we transform them so they all move in the same direction over the business cycle. For example, the unemployment rate tends to decline when payroll job growth increases. To make job growth move in the same direction as the unemployment rate, we change its sign. We focus on the period from January 1978 to mid-2013. For more details, see the technical appendix.

Our main interest is identifying those indicators whose movements over the past six months are most highly correlated with changes in the unemployment rate in the next six months. Because we are interested in the signals these data send about improvement in the outlook for the labor market, we calculate correlations over labor market expansions only, and do not include recessions. This is important because indicators that lead the labor market during downturns are not necessarily as informative during expansions. A prime example is the number of layoffs, which helps assess the depth of a downturn but is of little use in gauging the strength of a recovery. This is because the strength of recoveries is based on the rate at which people find jobs, which can remain low for some time after layoffs have subsided (Elsby, Hobijn, and Şahin, 2013). 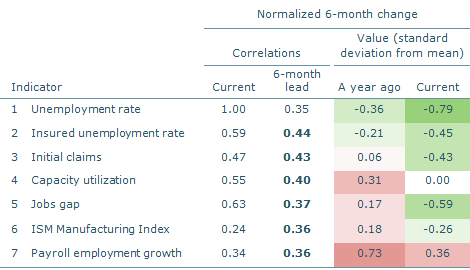 Sources: Bureau of Labor Statistics, Conference Board, Federal Reserve Board of Governors, Institute of Supply Management, Department of Labor, and FRBSF staff calculations. 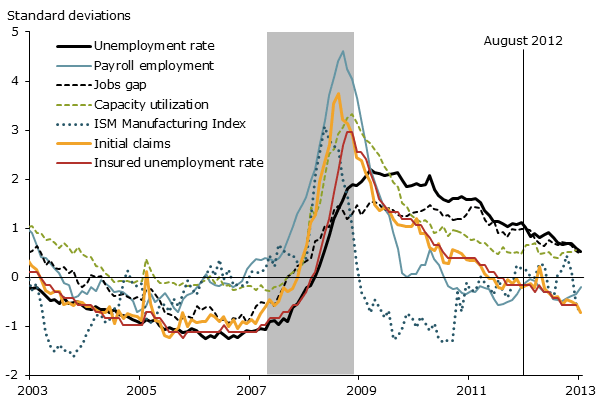 Sources: Bureau of Labor Statistics, Conference Board, Federal Reserve Board of Governors, Institute of Supply Management, Department of Labor, and FRBSF staff calculations.

Although we use our indicators primarily as a measure of momentum, it is useful to assess where they stand relative to their normal levels. This gives us an idea of the current state of the labor market rather than the rate at which conditions are improving. The paths of the normalized levels of the indicators from 2003 to 2013 are shown in Figure 1. The figure highlights several key insights from our momentum measures. First, beyond the decline in the unemployment rate, a broad set of measures reflect improvements in labor market conditions, and the leading indicators are moving in a direction consistent with a strong labor market. This is important given that recent declines in the unemployment rate have coincided with declines in labor force participation, which has muddied the positive signal about the market’s recovery. The second thing is that, while most of these indicators have not returned to normal levels, they are beginning to approach their historical averages, represented by the zero line. Finally, and perhaps most importantly for evaluating confidence in these improvements, the dispersion of these measures has narrowed markedly. This tells us that the labor market is improving along a variety of dimensions, not just a few isolated measures. These points suggest that labor market activity is beginning to converge to levels consistent with past recoveries rather than continuing at the highly suppressed pace that has defined the past few years.

Turning back to our momentum measure, Table 1 shows the two indicators that best predict future changes in the unemployment rate are the insured unemployment rate and initial claims for unemployment insurance (column 2, rows 2 and 3). This suggests that labor market recoveries tend to begin with the hiring of workers who are eligible for unemployment insurance and who tend to have longer previous work histories. In addition, workers’ and employers’ perceptions of economic conditions, as captured in the jobs gap and the ISM index, respectively, also are good indicators of the momentum in the labor market.

The last two columns of Table 1 show what these leading indicators signal about the pace of the labor market recovery a year ago, in September 2012, and what they signal today. In these columns, the more negative the number, the faster the decline in the unemployment rate over the next six months implied by the change in the indicator. So a negative number is a good thing. For clarity, the columns are color-coded from red to green. The darker the green, the stronger the signal for the pace of the recovery. Across the board, these indicators show the pace of the labor market recovery has increased compared with a year ago. We take this as evidence that the recovery in the labor market is robust, broad-based, and likely to continue, if not accelerate, over the coming months.

The Great Recession took an enormous toll on the labor market, which has been reflected in the deterioration of many labor market indicators. The pace of labor market improvement has been modest since the end of the recession, and many indicators have not yet returned to their pre-recession levels. Still, the improvements are visible in a broad set of indicators. The question then is whether we can expect these improvements to continue and at what pace. In this Economic Letter, we identified six indicators that lead future changes in the unemployment rate and that can be used to gauge the current momentum of the labor market recovery. All these indicators show that the recovery has more momentum now than a year ago. This is a strong signal that labor market improvement will continue at their current modest pace, and could even accelerate in the coming months. Of course, whether this increase in momentum amounts to a “substantial improvement” in the outlook for the labor market is a question for policymakers to decide.

Benjamin Bradshaw is a research associate in the Economic Research Department of the Federal Reserve Bank of San Francisco.