The U.S. federal government’s program that provides cash benefits to low-income families with a disabled child has grown rapidly over the past 25 years. This growth reflects changes in the implementation of the program rather than declines in children’s health or family income. Unfortunately, most disabled children from families that receive such benefits do not become employed when they grow up, so these policy changes may relegate these children to lifetime government support—probably near the poverty threshold—at the expense of taxpayers.

The federal Supplemental Security Income (SSI) program for disabled children provides cash benefits to low-income families with a disabled child. When the program began in 1974, about 71,000 disabled children received benefits, and program expenditures totaled around $40 million. As Figure 1 shows, the program is orders of magnitude larger today. In 2011, about 1.3 million disabled children received benefits at a cost of $9.3 billion. Program growth increased most rapidly immediately following the 1990 Supreme Court decision in Sullivan v. Zebley, which greatly expanded disability eligibility criteria for children. Welfare reform in 1996 tightened eligibility standards and slightly reduced the rolls for one year. However, since that time, recipients and expenditures have steadily increased.

In this Economic Letter, we summarize the factors behind this growth (for a detailed discussion, see Burkhauser and Daly 2011). Neither decreases in child health nor increases in the number of income-eligible families, are responsible. Instead, an easing of eligibility standards and the interpretation of these standards by Social Security evaluators are the probable drivers of the rise in the number of SSI disabled children beneficiaries. 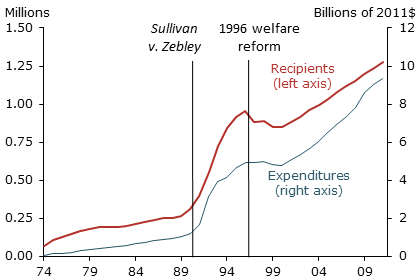 Figure 1 shows the growth of the SSI disabled children program since its inception. In principle, several factors might explain this growth. Since SSI is an income-tested welfare program, one possibility is that more families with a disabled child are meeting the income eligibility threshold. Another is that the underlying health of U.S. children has deteriorated, increasing the number of children who meet the program’s disability criteria.

In practice it is difficult to verify whether growth in the income-eligible population has contributed to caseload growth. The SSI means-test rules are complicated, and no reliable, publicly available data on the number of children who meet them are available. Hence, researchers must estimate the number of children who, if they were disabled, would be eligible for benefits. 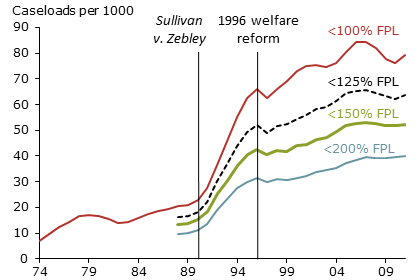 Not surprisingly, estimates of the percentage of eligible children receiving SSI disabled children benefits in any given year vary with estimates of the income-eligible population. It is lowest for the most generous view of the size of the eligible population, 200% of the poverty line, and highest for the most conservative view, 100% of the poverty line. But no matter which income eligibility estimate we use, the take-up rate has risen significantly over time. This pattern holds across all our measures of income eligibility, confirming that income-eligible population growth has not been a dominant driver of the rise in caseloads and expenditures. 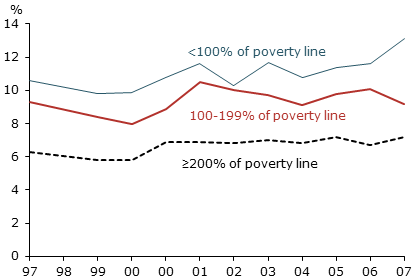 Another possibility is that the underlying health of children explains program growth. Identifying such a trend is quite difficult. However, the limited information on trends in child health and functional limitation suggest little change over time. Figure 3 shows the percentage of children ages 5 to 17 with an activity limitation reported by a parent according to poverty status. There has been little change in functional limitations among any of these status groups, including those who may be income eligible. These data are limited, but they do not indicate that changes in child health explain the growth over time in the SSI disabled children rolls.

When Congress originally enacted the SSI disabled children program, it recognized the difficulties of applying the standards of the adult Social Security Disability Insurance program to children. Thus, Congress determined that a child should be considered disabled for program purposes if “he suffers from any medically determinable physical or mental impairment of comparable severity” to a disabling impairment in an adult. Between 1974 and 1989, the child disability determination process neither included functional assessment, nor accounted for equivalents of adult vocational factors. The program experienced only modest growth and served children with severe physical and intellectual disabilities.

However, in 1990 the Supreme Court ruled in Sullivan v. Zebley that a functional limitation component parallel to that in the adult program must be included in the initial disability determination process for children. In response, the Social Security Administration added two new bases for finding children eligible for benefits: functional equivalence, which was set at the medical-listing level of the disability determination process; and an individualized functional assessment, which was designed to parallel vocational assessment for adults. These assessments lowered the level of severity required for children to be eligible for SSI benefits, allowing applicants who did not meet the medical-listing criterion to be found disabled if their impairments were severe enough to limit their ability to engage in age-appropriate activities, such as attending school (GAO 1994, 1995).

In 1996, as part of welfare reform, Congress revisited the definition of disability for children. It created new standards that were similar in spirit to those for adults, but were unique to children. Legislators intentionally tightened the eligibility criteria by raising the threshold for being functionally impaired and removing certain behavior-related limitations, such as maladaptive-behavior disorder, from the functional-listing criteria. Thus, the post-1996 standard represents a broader measure of disability than the one applied when the program began, but a narrower standard than the one used between 1990 and 1996. This reduced caseloads per 1,000 children across all our measures of the income-eligible population for one year.

Changes in disability rules for children applying for SSI noticeably affected caseloads. But the way SSI administrators interpreted these rules also had an impact. Administrators found themselves interpreting more subjective eligibility criteria. The outcome can be seen in the percentage of SSI disabled children awards for two categories: intellectual disability and other mental conditions. These represent extremes of the distribution between medically measurable and more-subjectively-determined conditions. In 1983, approximately 37% of new beneficiaries qualified based on intellectual disability. Only 5% had other mental conditions. By 2003, over half of new enrollees qualified based on other mental conditions, and that rose to over 55% in 2009.

Welfare reform also contributed importantly to SSI disabled children caseload growth among low-income families after 1996. Reform ended the Aid to Families with Dependent Children (AFDC) program, replacing it with Temporary Assistance for Needy Families (TANF). TANF came with time limits and work requirements. These reforms had a big effect on the SSI disabled children program. The SSI program does not directly provide services to children with disabilities, nor tie benefits to obtaining such services. It simply provides cash benefits to families with low incomes and a disabled child. In that sense, it is like AFDC or TANF, but with the additional stipulation that a family must include a child judged to have a disability.

In sum, the 1996 welfare reforms strictly limited access of low-income families to cash benefits and shifted more of the financial burden of support for such benefits onto the states. This created additional incentives for families with potentially eligible children to seek SSI disabled children benefits and it motivated states to help them. When these factors combined with relatively lower and more subjective eligibility standards, the SSI disabled children program was poised to grow.

The data suggest that the rise in SSI disabled children caseloads and costs are primarily policy driven. The question is, is this a bad thing? Even though it is costly to provide benefits to low-income families via this program, it is a redistribution of income to a mostly poor and near-poor population. The problem is, this redistribution has an important unintended consequence. Many beneficiary children from low-income families are so profoundly disabled that they would never be able to enter the workforce as adults. But others, especially the less clear-cut cases that have driven growth since the Zebley decision, might be able to hold a job with appropriate accommodation and training. However, once these children are on SSI, they rarely come off. Hemmeter, Kauff, and Wittenburg (2009) find that nearly two-thirds of SSI disabled children beneficiaries move directly onto SSI disabled adult rolls. Very few attempt to work thereafter. Moreover, only about 60% of those who do not move directly onto SSI disabled adult rolls are employed at age 19. Thus, most SSI disabled children beneficiaries graduate from the program into what is likely to be permanent status as an SSI disabled adult beneficiary. And, if they are denied these benefits, they turn to other forms of welfare. This outcome is unintended. But it is quite costly both for the beneficiaries, who live their lives at or near the poverty threshold, and for taxpayers, who fund lifetime benefits.

Richard V. Burkhauser is a professor of policy analysis at Cornell University.

Burkhauser, Richard V. and Mary C. Daly. 2011. The Declining Work and Welfare of People with Disabilities: What Went Wrong and a Strategy for Change. Washington, DC: American Enterprise Institute for Public Policy Research.

Kubik, Jeffrey D. 1999. “Incentives for the Identification and Treatment of Children with Disabilities: The Supplemental Security Income Program.” Journal of Public Economics 73, pp. 187–215.