How hard were small businesses hit during the Great Recession?

During the recent recession and recovery, small businesses experienced disproportionate job losses (see Burgen and Aliprantis 2012, Tasci and Burgen 2012, and Sahin et al. 2011). Between 2007 and 2012, their share of total net job losses was nearly double their 30% share of total employment. From the employment peak immediately before the recession through March 2009, the recession low point for private nonfarm employment, jobs at small businesses declined about 11%, according to the Business Employment Dynamics (BED) database of the U.S. Bureau of Labor Statistics. By contrast, payrolls at businesses with 50 or more employees shrank about 7%.

What explains the disparity between job losses at small and large businesses? Financial factors appear to have played a part. The financial crisis that accompanied the 2007–09 recession restrained the supply of credit to businesses. Banks severely tightened lending standards and raised interest rates for business loans during the crisis, according to evidence from the Federal Reserve’s Senior Loan Officer Opinion Survey on Bank Lending Practices. Survey participants reported that the degree of tightening was about the same for businesses of all sizes. However, large companies can more easily tap public credit markets, while smaller companies depend more on bank credit. Indeed, Duygan-Bump et al. (2011) found empirical evidence that financing constraints for small businesses were important in explaining unemployment during the Great Recession. Other potential sources of small business finance were similarly hard hit. Small business owners often rely on personal credit for financing, such as home equity loans, especially if they are just starting out. Thus, falling house prices may have restricted their access to financing. Research has found an especially low rate of business formation during the Great Recession (see Shane 2011). Another study found that the employment decline at newer small businesses was especially large in states with sharp house price declines (Fort et al. 2013).

Weak demand for small business products and services may also have played a role in the pace of job losses. During the recession, the most important small business concern was poor sales, not limited credit availability, according to survey data from the National Federation of Independent Business (NFIB). Although sales of small and large businesses both took hits early in the recession, sales of large businesses recovered more quickly (Sahin et al. 2011). Using state-level NFIB data, Atif Mian and Amir Sufi (2013) showed that the degree of concern about poor sales among a state’s small businesses was strongly correlated with the decline of employment in that state. Mian and Sufi’s result may help explain outsized job losses among small businesses. These businesses have relatively few opportunities to benefit from geographic diversification, which means that their fortunes tend to be closely tied to economic conditions in their home states. By contrast, larger businesses typically serve broader, more diverse geographic markets. 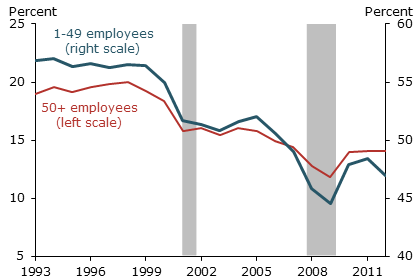 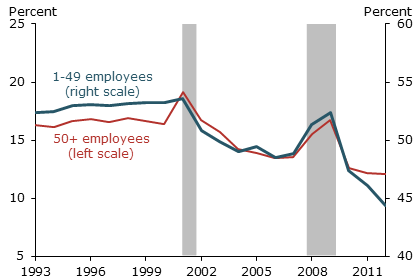 The BED database distinguishes between firms, which are defined as corporate or other legal entities, and establishments, which are units that produce goods or services, usually at a single physical location. A firm may consist of one or a number of establishments. The data presented in Figures 1, 2, and 4 are for firms. BED data do not include the formation of new firms, but they do include establishment births, which are shown in Figure 3. For example, when a manufacturer opens a new plant, it is counted as an establishment birth. Figure 3 does show firm formation using a different data series, the U.S. Census Bureau’s Business Dynamics Statistics. As the figure shows, the BED establishment birth path and the Census Bureau’s firm birth path both show steep drops in business creation just before and during the 2007–09 recession. By contrast, both the establishment and firm birth rates changed little during the 2001 recession. 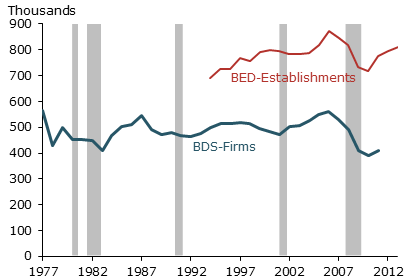 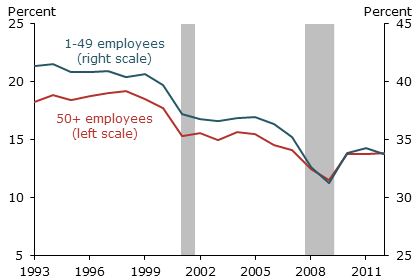 Moscarini, Giuseppe, and Fabien Postel-Vinay. 2012. “The Contribution of Large and Small Employers to Job Creation in Times of High and Low Unemployment.” American Economic Review 102(6) pp. 2,509–2,539.