Age Discrimination and the Great Recession

The sharp increases in the duration of unemployment for older workers during and after the Great Recession indicate that older individuals who lost their jobs because of the downturn or who were seeking new employment have had a harder time finding work than other workers have. Increasing unemployment duration for older workers has led to speculation that age discrimination may have played a role. Increased discrimination during poor labor markets might be expected because long queues of job applicants allow employers to apply more arbitrary selection criteria when making hiring decisions.

We focus on two features of state age discrimination laws. First, state laws vary on the minimum number of employees an employer must have for age discrimination laws to apply. States with lower minimums have stronger laws since some employees are covered who are not protected by the federal ADEA, which applies only to employers with 20 or more employees. During our 2003–11 sample period, 34 states had lower employer size minimums.

Second, some state age discrimination laws provide for larger damages than the ADEA by allowing compensatory or punitive damages. Federal law only allows for more than liquidated damages, that is, the actual cost of damages incurred, in cases of willful violation. During our sample period, 29 states allowed larger damages under less strict standards. Research has found that these two types of stronger protections enabled older workers to remain employed longer and may have increased hiring (see Neumark and Song 2013).

The available data do not tell whether the extent of age discrimination after the Great Recession varied across states depending on their age discrimination laws. However, we can ask whether these state protections were associated with less adverse effects of the recession on older workers compared with younger workers. 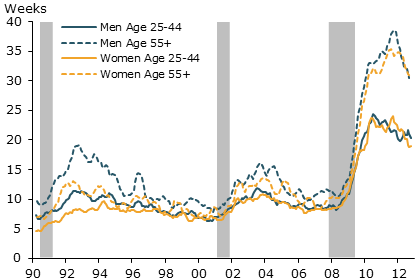 Notes: Gray bars indicate NBER recessions. Data are from Current Population Survey and are seasonally adjusted and weighted to be nationally representative.

Figure 1 shows the evolution of unemployment durations drawn from the Current Population Survey (CPS), a household survey conducted jointly every month by the U.S. Census Bureau and the Bureau of Labor Statistics. The CPS is the source of federal unemployment data and other well-known labor market indicators. We also analyze the Census Bureau’s Quarterly Workforce Indicators (QWI) data from all states for the period 2003–11. The QWI data come from a large sample of employee records matched to employer data, and track movements of workers into and out of businesses over time.

The federal ADEA applies to workers age 40 and over, while some state laws protect workers younger than 40. We study the age groups 25–44, which we designate younger workers, and 55 or older, which we call older workers, because of data constraints and a desire to focus on the most senior people in the workforce. We look at unemployment rates, employment-to-population ratios, median unemployment duration, and hiring rates, and conduct a statistical analysis to determine whether older workers in states with stronger age discrimination laws experienced less severe labor market disruptions during the Great Recession than younger workers.

Our statistical models control for other state-level factors that could have influenced these outcomes, including changes in the duration of eligibility for unemployment insurance benefits during this period. We also consider state differences in industrial composition to account for industry differences in employment by age group (see Neumark and Button 2013 for details). We estimate results separately for the period from the fourth quarter of 2007 to the second quarter of 2009, which roughly corresponds to the Great Recession, and the period immediately following the downturn from the third quarter of 2009 through the fourth quarter of 2011. We analyze these periods separately because labor market dynamics are quite different in them. 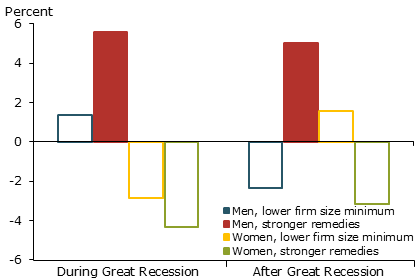 Notes: Bars show differences in the effects of the Great Recession on median unemployment durations for older versus younger workers, compared between states with stronger and weaker age discrimination laws. Solid bars indicate estimates that are statistically significant at the 5% or 1% level.

Figure 2 shows results for the unemployment durations of older and younger workers in states with stronger and weaker age discrimination laws during and after the Great Recession. The solid boxes indicate estimates that are statistically significant, meaning that it is very unlikely that we are incorrectly detecting an effect of state laws. We measure changes in the median unemployment duration in weeks for older workers relative to younger workers, comparing states with specific age discrimination protections and states that do not offer these specific protections. 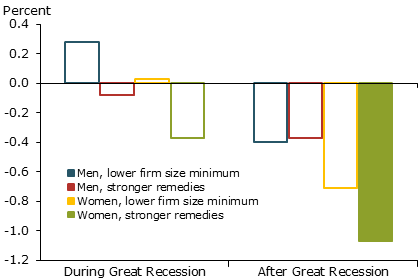 Figure 3 compares hiring rates for older and younger workers under varying state age discrimination laws. The estimates represent the percentage point change in the rate of hiring. The only statistically significant result is that larger damages are associated with a 1.07 percentage point drop in the hiring rate of older women relative to younger women after the Great Recession.

The substantial relative increases in older-worker unemployment durations have prompted considerable speculation about age discrimination. In addition, the findings on hiring are significant because they may suggest that older workers experienced discrimination when seeking jobs (Neumark 2008). We also found that during the recession larger damages were associated with a reduction in the employment-to-population ratio among older women relative to younger women. After the Great Recession, larger damages were associated with increased unemployment rates among older men relative to younger men. Lower employer size minimums were associated with reduced employment-to-population ratios for older women compared with younger women.

If these conjectures are correct, then as the economy recovers, stronger state age discrimination protections should become more effective in improving the labor market outcomes of older workers. Nonetheless, increased discrimination during and after the Great Recession may have extended unemployment durations of older workers, especially those near retirement. In that way, they might have prompted some older workers to hasten their exit from the labor force.

Finally, if age discrimination does increase during sharp economic downturns, then it may be useful to consider whether it is possible to modify age discrimination protections to maintain their effectiveness in times of economic turbulence. Possible modifications could include refinement of legal standards for discrimination that would make it harder to appeal to changes in business conditions. In addition, affirmative policies that would encourage hiring of older workers might be helpful.

Patrick Button is a Ph.D. candidate at the University of California, Irvine.