How Important Are Hedge Funds in a Crisis?

Before the 2007–09 crisis, standard risk measurement methods substantially underestimated the threat to the financial system. One reason was that these methods didn’t account for how closely commercial banks, investment banks, hedge funds, and insurance companies were linked. As financial conditions worsened in one type of institution, the effects spread to others. A new method that more accurately accounts for these spillover effects suggests that hedge funds may have been central in generating systemic risk during the crisis.

During the 2007–09 financial crisis, commercial banks, hedge funds, and investment banks suffered huge losses from investments that were exposed to housing markets. In fact, in 2008 the International Monetary Fund estimated that these types of institutions, along with insurance companies, had lost a combined $1.1 trillion.

One of the important lessons from the crisis is that systemic risk due to linkages between different types of institutions are significantly underestimated in most widely used risk measures, such as value at risk. Standard measures need to be adjusted to adequately reflect spillover effects among different parts of the financial system. Further, designating which financial institutions are deemed systemically important could depend on identifying to what degree distress in one institution spills over to other parts of the financial system.

However, measuring spillovers effects in practice is difficult for three main reasons. First, spillovers among financial institutions may be quite small in times of financial stability, but large when the system is under stress. Second, it is difficult to distinguish whether a shock affects all financial institutions at the same time or affects only one institution before it is transmitted to other institutions; this is particularly problematic if a common shock affects financial institutions with different intensity and not exactly at the same time. Third, spillovers are typically measured as correlations among the returns of different assets. These calculations suffer from a major disadvantage: Correlations do not identify the direction risk travels between assets. This means that, based on correlations, one cannot judge whether an adverse shock started in institution A and spread to institution B, or the reverse.

This Economic Letter reports on a method developed in Adams, Füss, and Gropp (2013) that addresses these concerns. This new risk measurement suggests that, compared with normal times, financial crises amplify the spillover effects among certain types of financial institutions. A surprising finding from this study is that hedge funds may be the most important transmitters of shocks during crises, more important than commercial banks or investment banks.

To incorporate spillover effects into a measurement of risk, we first must find a way to measure them. To do this, we develop a statistical model that links the risk in commercial banks, investment banks, hedge funds, and insurance companies. We use the model to estimate the risk in each type of financial institution. We then eliminate the common components that affect all sets of institutions simultaneously in order to focus on stress that flows from one set to another. The model distinguishes which direction these spillover effects flow between pairs of financial institutions. Finally, we estimate the links during both tranquil periods and crisis times.

The results confirm our conjecture that spillover effects appear small during normal times. However, during volatile market conditions such as the onset of the 2007–09 financial crisis, some of the effects dramatically increase in importance. This is true for spillovers from commercial banks to investment banks, as well as the reverse.

Even though there were prominent cases of insurance companies, such as AIG, that were adversely affected by the crisis, the model suggests that insurance companies are not systemically important in the sense of causing distress elsewhere. Rather, they appear as relatively safe during crises, as their returns tend to be negatively related to the returns of other financial institutions.

Hedge funds, on the other hand, adversely affect all three other types of financial institutions. During crises, the spillovers become very large, making hedge funds more important transmitters of shocks than commercial banks or investment banks. 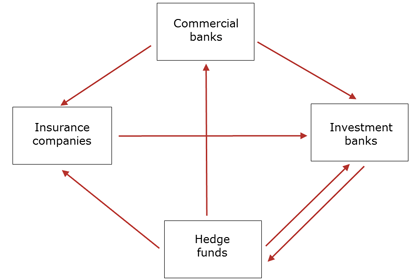 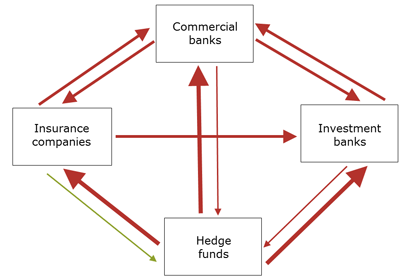 Why are hedge funds systemically important?

While most observers tend to agree that hedge funds have some systemic importance, there is little agreement on how large a role they play as transmitters of adverse financial shocks. Figures 1 and 2 summarize the model’s findings regarding the flow of shocks between different types of financial institutions. In the figures, red arrows correspond to spillover effects; the green arrow in Figure 2 shows positive effects from insurance companies, as mentioned earlier. The thickness of the arrows correspond to the strength of the effects: a thin arrow means that a spillover is statistically significant but economically small, while a bold arrow means it is both significant and economically important.

Why are the spillovers from hedge funds during financial crises so much bigger, and why do they seem to increase more than those from other financial institutions? Hedge funds are opaque and highly leveraged. If highly leveraged hedge funds are forced to liquidate assets at fire-sale prices, these asset classes may sustain heavy losses. This can lead to further defaults or threaten systemically important institutions not only directly as counterparties or creditors, but also indirectly through asset price adjustments (Bernanke 2006). One channel for this risk is the so-called loss and margin spiral. In this scenario, a hedge fund is forced to liquidate assets to raise cash to meet margin calls. The sale of those assets increases the supply on the market, which drives prices lower, especially when market liquidity is low. This in turn leads to more margin calls on other financial institutions, creating a downward spiral. Another example is investment banks that hedge their corporate bond holdings using credit default swaps. If hedge funds take the other side of the swap and fund the investment by borrowing from the same bank, the spillover risk from the hedge fund to the bank increases. These types of interconnectedness may underlie some of the spillover effects in our study.

How quickly do shocks transmit between institutions?

Linkages between different types of financial institutions complicate how overall risk in the financial system is measured. Adverse shocks can affect institutions directly or they can spill over from other institutions. We develop a new approach to measure these spillover effects that has some advantages over the approaches used in the past. We estimate the effects for commercial banks, investment banks, hedge funds, and insurance companies using daily data. We find that both the size and the duration of risk spillovers among financial institutions change markedly depending on whether the financial markets were in normal times or in crisis. Risk spillovers from a shock to one type of institution are small during normal times, but can be considerably larger during crisis times.

It is important to emphasize that, in contrast to the existing literature, the approach described in this Letter can delineate between common shocks that simultaneously affect all institutions and pure spillover effects from one type of financial institution to another. Comparing results from this method with standard correlations, we show that standard approaches may overstate spillovers in normal times and understate spillovers in volatile times. Most importantly, we find that hedge funds may play an even more prominent role in transmitting shocks to the rest of the financial market, and thus may amplify systemic risk more than previously thought.

Our model focuses on statistical relationships but does not explain the mechanisms underlying the estimated spillovers. To trace spillover effects back to economic relationships rather than statistical ones, one would need much more detailed information on how much risk different financial institutions are exposed to, their assets, and their liabilities. Unfortunately, this type of information is not available for the hedge fund industry. However, there is a growing recognition that hedge funds are systemically important. For example, the initiatives in Lo (2008) call for hedge funds to provide more information to regulators on a confidential basis, including leverage, liquidity, counterparties, and holdings. This could enable supervisors to more accurately assess the overall level of risk in the financial system. Concerns over the systemic importance of hedge funds also underlie the tighter reporting requirements for large institutions in the Dodd-Frank Wall Street Reform and Consumer Protection Act of 2010. Our findings support these initiatives as a way to improve the measurement of overall risk in the financial system.

Reint Gropp holds the House of Finance endowed Chair of Sustainable Banking and Finance at Goethe University, Frankfurt, and is a visiting scholar at the Federal Reserve Bank of San Francisco.