The traditional relationship between unemployment and output growth known as Okun’s law appeared to break down during the Great Recession. This raised the question of whether this rule of thumb was still meaningful as a forecasting tool. However, recent revisions to GDP data show that its relation with unemployment followed a fairly typical cyclical pattern compared with past deep recessions and slow recoveries. The comparatively common patterns suggest that rumors of the death of Okun’s law during the Great Recession were greatly exaggerated.

Arthur Okun (1962) described the consistent relationship between changes in output and changes in unemployment that has become a standard tool for monetary policymakers and forecasters. The statistical relationship he uncovered has come to be known as Okun’s law. A simple form of this popular rule of thumb says that a 2% drop in inflation-adjusted GDP growth relative to trend is associated with about a 1 percentage point increase in the unemployment rate.

Because of the historical stability of Okun’s law in the United States, economists often use the unemployment rate to calibrate their economic forecasts. In particular, they project that GDP growth and changes in the unemployment rate will move together at this two-to-one ratio in the future as they have on average in the past. While this is a sensible approach, it appeared to break down during the Great Recession and ensuing recovery. Unemployment rose more quickly in 2008 and 2009 than expected given the modest decline in GDP reported at the time (see, for example, Daly and Hobijn 2010). Subsequently, unemployment has fallen quickly despite fairly modest growth in GDP. This deviation from the average relationship raised questions about whether the severity of the Great Recession had fundamentally altered the underlying workings of the economy.

In this Economic Letter, we re-examine the apparent breakdown in Okun’s law and put it in the context of previous recessions and recoveries. We find that part of the apparent inconsistency in the relationship between unemployment and output dissipated once GDP data were revised. Comparing the revised estimates of Okun’s law with previous recessions, we find that temporary deviations from the average two-to-one rule of thumb are common. In fact, through this lens the 2007 episode resembles other deep recessions and slow recoveries, such as the experience during and after 1973. Our findings suggest that Okun’s law is working about the same as it always has. Moreover, temporary departures from the average relationship are part of the normal dynamic path of the economy. (See Daly, Fernald, Jordà, and Nechio 2013 for a more detailed discussion.) 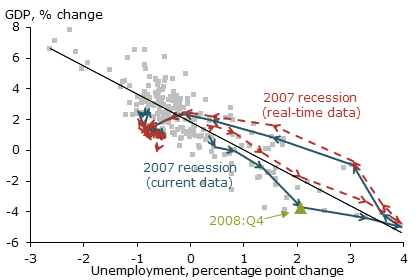 To simplify our study, we focus on the relation between output growth and changes in the unemployment rate. In particular we analyze four-quarter growth of real GDP per person aged 16 to 64 and four-quarter changes in the unemployment rate. Using GDP per person helps account for demographic changes to the working-age population that may affect GDP growth. Figure 1 shows the relation between GDP growth per person and the change in the unemployment rate. The gray squares show all of the points, using current data as of December 2013. The solid black line reflects the average relationship between these data estimated statistically using a method called linear regression. Although most data points lie fairly close to the line, the fit is far from perfect. The line indicates that from 1959 to 2013, a 1 percentage point increase in unemployment is associated on average with an almost 2% decrease in output.

Questions about whether Okun’s law was still applicable arose during the depth and length of the Great Recession. Data available at the time, referred to here as real-time data, appeared to deviate from the typical relationship between output and unemployment. The red dashed line in Figure 1 recreates the path using unemployment changes and real-time data on four-quarter growth in GDP. In particular, our real-time series reflects four-quarter growth in real GDP as it was released using the so-called third, previously known as “final,” estimate for each quarter. For example, in the fourth quarter of 2008, illustrated by the green triangle in the chart, the unemployment rate had increased 2.1 percentage points from a year earlier. Current data (blue line) show that GDP per capita had fallen almost 4% over the same time period. But the corresponding point on the red line indicates that data initially released in March 2009 for the fourth quarter of 2008 showed a much more modest decline of less than 2% in GDP per capita. With real-time data, the red line shows that the entire loop shifted up, at times markedly so. Rather than unemployment increasing too little, real-time data suggested there was arguably too rapid a rise in unemployment during the recession itself.

Whether we analyze Okun’s law with real-time or revised data, countercyclical loops tracing the relationship over time are a common feature. These loops reveal an underlying characteristic of the U.S. business cycle. Changes in employment—and likewise unemployment—lag behind changes in GDP. For example, faced with a shortage of demand, it takes time for firms to adjust staffing levels. They are more likely to adjust hours per worker and capacity utilization first. Daly et al. (2013) discuss in more detail the various adjustments among households and firms that underlie the Okun relationship, some of which are likely to occur with a delay. Researchers often account for these adjustments by including lagged data on unemployment changes and output growth (see Knotek 2007). However, dynamic versions of Okun’s law that adjust for time lags among various components of GDP and unemployment are difficult to depict. Thus, we focus here on a simpler, more nuanced relationship between output and unemployment.

Data revisions since the Great Recession have systematically shown that output and productivity growth were worse than originally thought (see Fernald 2014). The comparatively strong output performance reported at the time translated into relatively strong real-time productivity growth (dashed red line), which was striking in light of the severity of the recession. But with revised data, productivity now looks much more typical. The revisions largely reflect new data on spending and income that are only available with a lag, such as Census surveys, or are subject to revision, such as tax return data. Note that, although major revisions were made to measurement methods and definitions used in the national accounts data, those changes appear relatively unimportant in Figure 1.

Finally, the most recent period is shown in the cloud of points in Figure 1 at the end of the blue (current) and red (real-time) loops. Recent GDP growth has been weaker than one might expect given a declining unemployment rate. Much of this weakness reflects slow trend growth relative to history.

Counterclockwise loops and data revisions are the norm 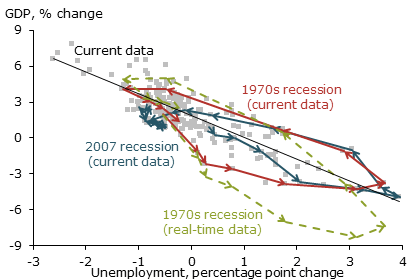 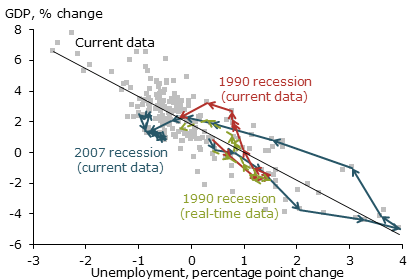 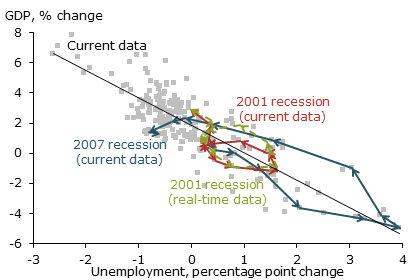 To put the Great Recession in perspective, we compare it with revised and real-time data on GDP growth per capita during selected previous recessions and the beginning of subsequent recoveries. In particular, Figures 2, 3, and 4 report the experiences following the 1973, 1991, and 2001 recessions, respectively. The lines start in the quarter of the business cycle peak before the recession and end eight quarters after the trough, or end of the recession.

In each figure, a solid red line shows the current data as of December 2013, and a dashed green line shows real-time data that were available at the time of each episode. For comparison, the three figures also include current data for the most recent 2007 episode, replicating the blue line from Figure 1.

All four recessions have two main patterns in common: a counterclockwise loop for both real-time and revised data, and fairly sizable data revisions.

Figure 2 shows that the experience during the Great Recession and recovery is remarkably similar to the experience following the deep recession that started in 1973. The 1970s recession falls under the average (black line) a bit more early on, but then follows a largely similar countercyclical loop. Moreover, although the recovery from the Great Recession is often characterized as slow, it looks similar to the recovery following the deep 1970s recession.

Figures 3 and 4 show that the slow or “jobless” recoveries following the 1990 and 2001 recessions have smaller, tighter loops than the 2007 recession. Regardless, the two earlier episodes also feature the counterclockwise pattern.

Current data for all of the episodes show fairly sizable revisions to GDP growth. In the 2007 and 2001 episodes, the revisions made the recession or recovery look worse than initial real-time reports suggested; in other cases during the 1970s and 1990s, the recession or recovery improved compared with real-time data. These revisions highlight the challenges facing analysts and policymakers, who must rely on imperfect information when making decisions.

This Economic Letter shows that, in the Great Recession, some of the questions about Okun’s law dissipated with subsequent revisions to GDP data. We use these revised data to show that unemployment and GDP followed a typical cyclical pattern during the downturn and early recovery. Indeed, the path of output and unemployment was surprisingly similar to that following other deep recessions, as in the mid-1970s. In addition, we find that a discrepancy between data available at the time and later revisions occurs frequently in other past recessions and recoveries. This highlights one difficulty of real-time analysis.

Okun’s law is a simple statistical correlation, yet it has held up surprisingly well over time. Underlying it are myriad adjustments by firms and households to the inevitable shocks that buffet the economy. With this much variation, it would be surprising if this rule of thumb performed exactly the same from one recession to the next. Nevertheless, even through the depth of the Great Recession and the slow recovery, the relationship between output and unemployment suggested by Okun’s law remained remarkably similar to previous deep recessions. Overall, this historical pattern is consistent with the view that the unemployment rate remains a good summary measure of overall economic slack.

Fernald, John. 2014. “Productivity and Potential Output Before, During, and After the Great Recession.” FRB San Francisco Working Paper 2012-18 (revised April 2014).

Okun, Arthur M. 1962. “Potential GNP: Its Measurement and Significance.” Proceedings of the Business and Economics Statistics Section of the American Statistical Association, pp. 98–104.