Following the 2007–09 financial crisis, bank lending to businesses plummeted. Five years later, the dollar amount of bank commercial and industrial lending has finally surpassed the previous peak. However, despite very accommodative monetary policy and abundant excess reserves in the banking system, the spread of the commercial loan interest rates over the target federal funds rate remains above its long-run average. This suggests that business loans are not yet cheap relative to banks’ funding cost.

Bank lending to businesses dropped precipitously following the 2007–09 financial crisis, in part because banks tightened both underwriting standards and lending terms to levels not seen before. At the same time, businesses were reluctant to borrow amid anemic sales and an uncertain economic outlook. Only recently has bank commercial and industrial (C&I) lending finally surpassed the previous peak from 2009. Although the quantity of bank lending to businesses has finally recovered, what about the terms of that lending?

In this Economic Letter, I delve beyond the quantity of bank C&I lending to examine the terms of these business loans using both survey data and loan-level data. Surveys from bank lending officers report that, on balance, they have been easing C&I loans’ lending terms for several years. However, analysis using loan-level data show that, while the spread of the interest rates charged on C&I loans over the federal funds rate has been declining, it still remains above the historical average. Thus, business loans may be more available, but they are not offered at terms that are considered cheap. 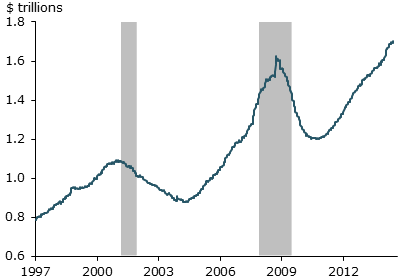 Bank lending since the financial crisis

For many businesses, especially smaller firms that do not have access to the capital market, bank credit is a very important source of financing. In the aftermath of the financial crisis, banks tightened both the lending standards and terms on C&I loans for many reasons, including banks’ own capital positions, loss overhang, and risk aversion, as well as the very uncertain economic outlook, which could further affect borrowers’ creditworthiness. Figure 1 shows the plunge in C&I lending between 2009 and 2010. Part of this sharp drop was due to weak demand by businesses, but a major factor was tighter underwriting standards by banks. In fact, tight credit conditions at banks have been regularly cited by policymakers as a major headwind to the economic recovery, in part contributing to the lackluster growth in the current expansion.

Fast-forward to 2014. The level of bank C&I lending has finally surpassed its 2009 peak. Nevertheless, the recovery in lending volume happened against the backdrop of several years of highly accommodative monetary policy, when the federal funds rate on which the bank lending rate is based has been near zero. At the same time, excess reserves in the banking system skyrocketed to an unprecedented level as a result of the Federal Reserve’s large-scale asset purchases. Taken together, these Fed actions were intended to boost demand by lowering the cost of borrowing, so the recent growth in C&I loans shown in Figure 1 is not unexpected.

Recently, policymakers raised concerns about potential imprudent extensions of credit in the leveraged loan market (see for example, Stein 2013), and banking regulators issued the Interagency Guidance on Leveraged Lending in 2013. Unlike leveraged lending, whose proceeds are used mainly to finance buyouts, acquisitions, or capital distributions, plain C&I lending is the lifeblood of many businesses—used to finance working capital, plant, and equipment. As such, although leveraged lending may draw the attention of financiers on Wall Street, the availability and pricing of C&I loans have more direct effects on Main Street.

In light of the very loose financial conditions, one might ask whether C&I loan spreads have narrowed. That is, with unprecedented amounts of excess reserves in the banking system and a policy rate near zero, are banks charging lower interest rates for loans relative to their funding cost than in the past? Complicating this question are the recent structural changes in the banking industry. For example, the permanently higher bank capital requirements and other regulatory costs faced by banks—such as those associated with the Dodd-Frank Wall Street Reform and Consumer Protection Act—may have raised the cost of making bank loans. Moreover, the consolidation of the banking industry following the financial crisis has raised banking concentration, which could have lessened competition and permitted banks to charge more in the loan market. Hence, the net effects on bank C&I loan rates are not clear. Note that the cost of bank financing has a direct effect on firms’ cost of capital, which in turn determines their investment decisions. The analysis, therefore, may also shed light on the rather sluggish business investment that we have observed in the current expansion. 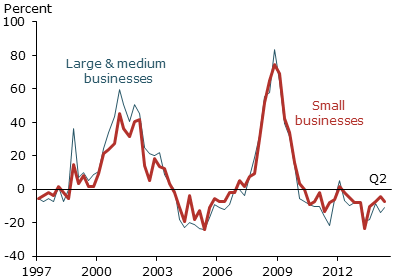 Every quarter, the Federal Reserve gathers information on bank lending through its Senior Loan Officer Opinion Survey (SLOOS). The survey asks a panel of about 100 domestic banks and U.S. branches of foreign banks about changes in loan underwriting standards and terms on, as well as demand for, bank loans to businesses and households over the past three months. SLOOS data reported that, on balance, banks started easing standards for C&I loans around early 2010 (Figure 2). Around the same time, banks started lowering the spreads between C&I loan rates and their funding costs (Figure 3). Note that the banks in the survey reported they had eased underwriting standards and terms to both large and small businesses. 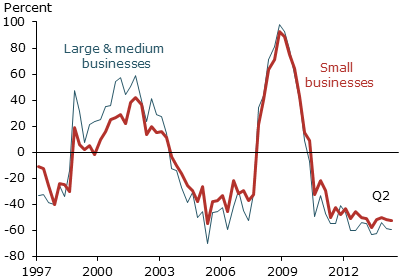 The survey evidence seems straightforward: Businesses should be able to obtain bank credit fairly easily at favorable terms. This interpretation suggests that the headwinds stemming from credit availability to businesses should now be quite modest.

The challenge in interpreting the SLOOS data is that, while the qualitative evidence may be clear, the quantity or magnitude is difficult to infer. For example, while underwriting standards have loosened since 2010, it’s unclear whether the cumulative loosening of standards means that C&I underwriting standards are now too lax, echoing the recent concerns in the leveraged loan market. Another question is whether the cumulative decline in loan spreads has actually resulted in cheaper C&I loans. If so, it could alleviate concerns about regulatory costs being passed through to borrowers and about the effects of banking concentration on borrowing.

To get a more complete picture of the actual costs of C&I borrowing from banks, I examine the loan-level transaction data the Federal Reserve collects in its Survey of Terms of Business Lending (STBL). Each quarter, the STBL collects data on all C&I loans made by a panel of about 350 domestic banks during the report period, which covers the first business week of February, May, August, and November of each year. The panel is drawn from across the United States and includes both large and small banks that actively engage in business lending.

Note that the STBL covers all C&I loans to U.S. addresses when funds are disbursed to borrowers during the report period. As such, the data are from actual transactions during that period, only excluding loans that are not denominated in U.S. dollars or that are smaller than $7,500. For each loan, the reporting bank also provides the borrower’s credit risk rating as defined by the Federal Reserve (rather than by the reporting bank), the loan interest rate, the dollar amount, and whether the loan is backed by collateral. The extensive details available allow the data to be parsed carefully for a more robust analysis.

For my analysis, I use a regression model to study how the C&I loan rate changes over time after controlling for certain characteristics, including the loan size, credit risk rating, pricing convention, whether the loan was made under a loan commitment, collateral, and the identity of the lending bank (see Kwan 2010 for details). According to the model, the average rate for C&I loans to borrowers, after controlling for loan characteristics, tracks both the target federal funds rate and the three-month Libor, or London interbank offered rate, reasonably well, but the Baa-rated corporate bond rate less well. One possible reason for this result is that most C&I loans are short-term and are priced according to an interest rate index, such as the prime rate or the Libor, while Baa-rated corporate bond rates are fixed over the life of the bond with maturity from seven to ten years. 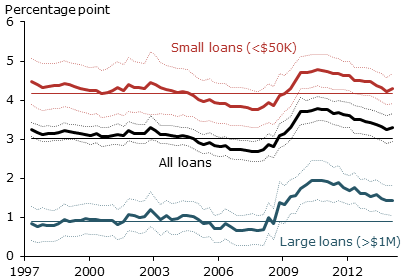 Next, I examine C&I loan rates after controlling for loan characteristics and the movement of interest rates over time. Figure 4 charts the average percentage point spread between the interest rate charged on the highest credit quality C&I loans and the target federal funds rate. The three lines in the figure show the average loan spreads for small and large loans, as well as for all loans; the dotted lines show the range of statistical certainty around model estimates. Horizontal lines show each group’s historical average from 1997 to 2008.

The middle black line in Figure 4 shows that the average loan spread spiked following the 2007–09 financial crisis. Since mid-2010, the spread has been narrowing, but the decline has been gradual. As of the first quarter of 2014, the spread remains about 0.26 percentage point above its historical average. The lower blue line in the figure shows the analysis for large C&I loans greater than $1 million, and the upper red line shows the analysis for small C&I loans less than $50,000. They suggest that both large and small loans are returning to normal at a similar pace.

According to the loan-level data, actual loan spreads seem higher than what the survey of loan officers suggests. C&I loans do not look unusually cheap, compared with the historical average. However, it is unclear whether the historical average remains the right benchmark, given the structural changes in the banking industry, such as higher capital requirements and regulatory compliance, as well as changes in competition among banks.

While bank C&I lending volume has finally surpassed its prior peak, the question remains: Have bank lending rates returned to normal? Senior loan officer surveys report that bank C&I loan spreads have been decreasing since 2010. Together with looser underwriting standards, this suggests that business borrowing is both easy and cheap. However, analysis of loan-level data shows that, although the C&I loan spread has been declining, it remains above its historical average. From the perspective of business borrowers, loans look, at best, fairly reasonably priced relative to banks’ funding costs.

Simon Kwan is a vice president in the Economic Research Department of the Federal Reserve Bank of San Francisco.

“Interagency Guidance on Leveraged Lending.” 2013. Board of Governors of the Federal Reserve System, Federal Deposit Insurance Corporation, and Office of the Comptroller of the Currency document, March 21.