Historically, businesses in most countries have not been able to sell bonds denominated in their home currencies to foreign investors. In recent decades this trend has been changing. Research shows that bonds denominated in currencies other than the major global currencies have increased, particularly following the global financial crisis. However, not all countries were affected equally. Countries that were able to take advantage of the temporary disruption and near-zero interest rates in global financial markets were the ones with a combination of low government debt and a history of stable inflation.

Many businesses that issue debt in international markets do not do so in their country’s home currency. In fact, 97% of debt is issued in the five largest “global” currencies—the U.S. dollar, the euro, the British pound, the yen, and the Swiss franc—but borrowers in these countries account for only 83% of all international debt issued (Hausmann and Panizza 2003). This long-standing trend of borrowing in a different currency poses a risk known as currency mismatch, which occurs when borrowers suffer balance sheet deterioration if the exchange rate of their home currency falls in relation to the issuing currency. Nevertheless, firms may choose to issue debt in global currencies, either because investors would demand higher interest rates for dealing in home currencies or because debt in home currencies could fail to generate demand.

While international debt markets are still dominated by global currencies, this dominance has been slowly eroding. Since the turn of the century, firms have become increasingly able to issue in home currencies in international debt markets. For many countries, this has been accompanied by policies to improve macroeconomic stability, such as the adoption of formal inflation targeting. Moreover, Hale and Spiegel (2012) find that the introduction of the euro in 1999 reduced the cost of home currency issuance for firms in the euro area.

In this Economic Letter, we review evidence from our recent research (Hale, Jones, and Spiegel 2014) that debt issuance in home currencies appears to have markedly increased during the 2007–09 global financial crisis, at least for a select group of countries. This development probably resulted as the relative cost of issuing in home currencies fell temporarily during the crisis. The temporary decline induced more firms to issue in their home currencies during the crisis, which enabled them to continue using home currencies once financial conditions returned to normal. However, not all countries experienced the same boost from the crisis. Those countries adopting policies that raised market participants’ expectations of price stability—including advanced economies, other than the global currency countries, with histories of stable prices and emerging market economies that adopted formal inflation targeting regimes—were more likely to experience an increased share of firms using home currencies in international debt markets.

The phenomenon where firms and governments face difficulties borrowing in their home currencies in international capital markets is sometimes referred to in the literature as “original sin” (see, for example, Eichengreen and Hausmann 1999). It reflects the problem that, if foreign investors are reluctant to lend in borrowers’ home currencies due to fears about future economic instability, the resulting hard currency debt would increase the likelihood of such instability. Some research has found that countries that suffer most from original sin are those with histories of poor macroeconomic policies (Burger and Warnock 2006). Other research has stressed structural problems in international capital markets that encourage borrowing in global currencies (for example, Hausmann and Panizza 2010).

Over the past few decades, several economic developments have helped mitigate the problem of original sin. Inflation stabilization, often achieved through adopting an explicit inflation targeting regime, has helped several previously suspect countries gain new credibility, because formal inflation targets have not only proven to be durable, but have also exhibited less exchange rate volatility and fewer abrupt drops in net capital flows (Rose 2007). At the same time, issuing debt in global currencies has become less attractive as international financial markets have evolved. Technological advances may also have reduced the transaction and information costs of issuing in smaller currencies. The result appears to be an increase in home currency issuance, as Burger, Warnock, and Warnock (2012) document for private and public bonds in emerging markets.

Home currency issuance before and after the global financial crisis 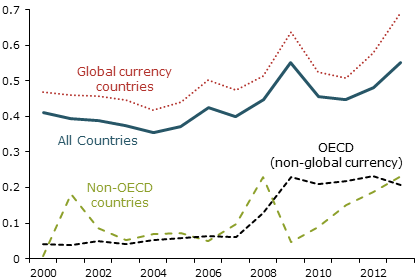 We explore original sin incidents for a large sample of 110,246 international bond issues by firms from 49 countries around the time of the global financial crisis. We divide the firms’ countries of origin into three categories: those that are homes to the aforementioned global currencies; relatively affluent member countries of the Organisation for Economic Co-operation and Development (OECD) that were not included in the global currency group; and non-OECD countries, which are primarily emerging market economies since they are more likely than other countries in this group to issue debt in international bond markets. Figure 1 shows that issuance in home currencies increased substantially in all three categories during the crisis period. However, fortunes differed among the groups when financial conditions normalized in 2009. Among non-OECD countries, we see an immediate decline in home currency issuance towards pre-crisis levels. The share of firms from non-global currency OECD countries issuing in home currencies remained high, suggesting that the crisis period persistently increased the capacity of firms in these countries to issue in home currencies.

Analysis shows that bond issues that are larger in size are more likely to be in global currencies. Bonds issued by firms from non-global currency countries with higher quality legal institutions are more likely to be denominated in firms’ home currencies.  Examining within-country variation, we find evidence that the adoption of formal inflation targets increases the probability of home currency issuance for firms from non-OECD countries. We also find that recent episodes of high inflation in the OECD group reduce the probability that firms will issue in home currencies. Furthermore, evidence shows that recent episodes of high inflation combined with high ratios of government debt to GDP are associated with lower probabilities of issuing in home currencies for all non-global currency countries.

Figure 2
Change in ratio of bonds issued in home currency, from before to after crisis 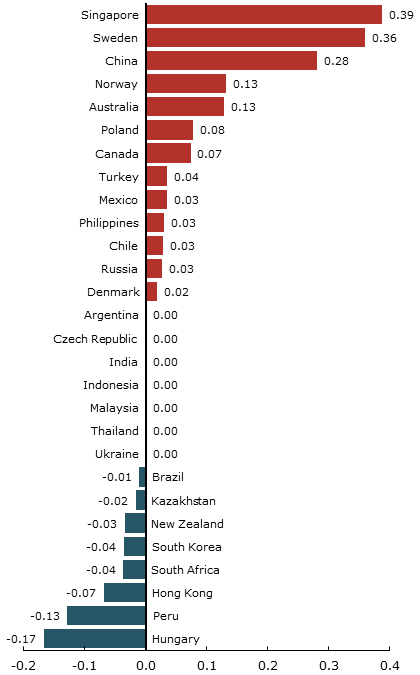 Figure 2 illustrates that some countries experienced a substantial increase in the share of home currency issuance after the crisis, while others did not. In particular, large increases in the share of issues in home currency were observed in Singapore, Sweden, China, and Norway. China’s increase probably reflects new policies intended to promote the renminbi as a new global currency. The other countries are relatively developed with stable macroeconomic policies. In contrast, countries with notable declines in the percentage of home issuance include Hungary and Peru, two countries whose difficulties continued after the global financial crisis. Not surprisingly, the firms that appeared to benefit the most from the crisis episode in terms of enhanced capacity for home currency issuance were primarily from nations that appeared likely to be economically stable in the future.

We next test for what characteristics might have boosted the probability that a given country’s average share of home currency issuance increased between the periods 2002–06 and 2009–13 among non-global currency countries. We find that the higher the sovereign risk, the lower the likelihood that a country increased its ratio of debt denominated in its home currency after the crisis. More volatile exchange rates are also associated with a higher increase in the probability of using the home currency after the crisis. This makes sense from the issuer’s point of view—the more volatile the exchange rate, the higher the issuer’s incentive and willingness to pay to match the currency composition of its balance sheet. We find that the combination of high debt-to-GDP ratios and high inflation histories negatively affects the probability of an increase in home currency issuance. However, simply adopting a formal inflation targeting regime doesn’t seem to matter; international capital markets pay more attention to countries’ inflation and monetary policy stability than to their stated monetary regimes.

While the U.S. dollar remains the primary currency used for international bond issues, it has been slowly losing its dominance for quite some time. Our research shows that the 2007–09 global financial crisis accelerated this trend, such that a greater share of firms worldwide can issue debt in their home currencies than was previously possible. The results suggest that the crisis offered well-suited countries a “baptism” of sorts, setting the stage for a new equilibrium in the global economy, in which a broader set of countries can issue debt internationally in their own currency and escape the problem of “original sin.” However, the rise in home currency issuance has not been uniform across countries. Those countries that were able to take advantage of the temporary disruption and near-zero interest rates in global financial markets were the ones with a combination of low government debt and a history of stable inflation. We also find that adopting formal inflation targeting regimes helped developing countries increase their home currency bond issuance in foreign markets, although the adoption of inflation targeting did not matter as much for developed economies. For emerging markets, it appears that having a history of stable inflation was more important in the eyes of international investors than how that low inflation was achieved. Overall, while the problem of original sin in international bond markets has diminished, poor macroeconomic outcomes in some countries can still hinder the ability of businesses to issue debt in home currencies.

Galina B. Hale is a research advisor in the Economic Research Department of the Federal Reserve Bank of San Francisco.

Peter Jones is a graduate student at the University of California, Berkeley.

Hausmann, Ricardo, and Ugo Panizza. 2003. “On the Determinants of Original Sin: An Empirical Investigation.” Journal of International Money and Finance 22, pp. 957–990.