The aging U.S. transportation infrastructure has been steadily deteriorating for many years now and needs serious maintenance and repair. The American Society of Civil Engineers gave the nation’s roads a “D” rating in 2013, indicating that they are mostly below standard, with a large portion of the system exhibiting significant deterioration. Similarly, the World Economic Forum ranked the United States 18th in the world in terms of road quality in 2013. While it’s widely acknowledged that the country’s highways need repairs, policymakers disagree about how to pay for these improvements.

During the Great Recession, a surge in federal government spending was one option frequently called for as a means to sustain and stimulate the economy. Given the substantial perceived need for infrastructure improvements, many commentators argued that highways should be near the front of the line for any stimulus dollars. It is no surprise then that the 2009 fiscal stimulus package known as the American Recovery and Reinvestment Act (ARRA) contained $48 billion in transportation funding, $27 billion specifically for roads. These funds generally took the form of grants to state governments and were in addition to the usual federal transportation grants sent to state governments every year from the national Highway Trust Fund. Thanks to ARRA, federal highway grants to states jumped nearly 75% in 2009. Still, road spending by state and local governments nationwide—which is the source of virtually all road spending in the United States—was roughly flat between 2008 and 2011.

Because highway grants from the Recovery Act essentially had no strings attached, state governments were free to use the additional funds as they saw fit. This, together with the lack of increase in highway spending nationally between 2008 and 2011, caused many people to conjecture that state governments must have used the funds either to pay down debt or for other purposes, rather than actually spending the money on roads.

Yet, using national statistics to infer the outcome of stimulus spending is problematic because it doesn’t tell us how highway spending would have evolved without the extra funds from federal highway grants. State tax revenues declined dramatically during the Great Recession, and because states are quite limited in their ability to borrow or tap into savings during downturns, highway spending might well have declined dramatically also.

In this Economic Letter, we turn to the more detailed state-level transportation data to examine the extent to which highway grants from the Recovery Act led states to increase their spending on roads. Strikingly, these data show a very strong positive relation between how much a given state received in ARRA highway grants and how much the state spent on roads over 2009 to 2011. Additional analysis suggests this correlation reflects a causal effect of federal grants on state highway spending. In fact, we find that state highway spending was boosted over these three years even more than dollar-for-dollar with the ARRA highway grants, as initial spending appears to have spurred complimentary investment in subsequent years.

About one-third of the total cost of the ARRA came in the form of grants to state governments. Many observers have argued that the federal government relinquishes much of its control over how stimulus funds are ultimately used when it gives such grants to states. They argue that the federal government instead should allocate stimulus dollars to direct federal purchases. But in the case of highway infrastructure, this would be difficult since road construction and maintenance are primarily administered by state and local governments. Nevertheless, our findings indicate that, at least in the case of road infrastructure, conducting countercyclical fiscal policy through changes in grants can indeed be effective at boosting state government spending on the targeted activity.

Highway grants in the Recovery Act

The financial crisis in the fall of 2008 and the rapid decline in economic activity that followed led to the enactment of the American Recovery and Reinvestment Act (ARRA) in February 2009. The latest estimates put the 10-year cost of the package at roughly $800 billion, with the vast majority of the costs incurred in the first three years. The Recovery Act involved a combination of tax cuts, representing roughly one-third of the cost, and increased spending.

Of the spending, about half took the form of grants to state and local governments. Specifically, the Bureau of Economic Analysis (BEA) reports that between 2009 and 2012, $282 billion was paid out in federal transfers to help support health, education, infrastructure, and other programs at state and local levels. Capital grants for transportation infrastructure constituted nearly $48 billion of these transfers between 2009 and 2012, with $27 billion going toward highway grants to state governments. This was on top of the usual grants states receive every year out of the federal Highway Trust Fund. 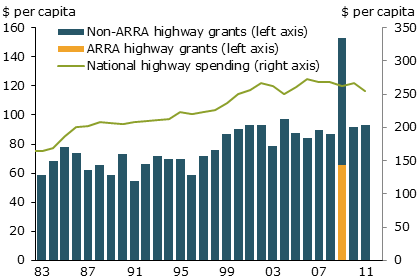 Note: All values stated in 1997 dollars.

The importance of ARRA grants relative to other highway grants is shown in Figure 1. The bars in the figure show that states received between $50 and $100 per capita in highway grants annually between 1983 and 2008, valued in 1997 dollars. The Recovery Act added about $70 per capita ($27 billion) in 2009, a jump of nearly 75% in a single year. Yet, national spending on highways remained roughly flat between 2008 and 2011 (green line).

As in medical studies of treatment effects, in the ideal experiment the treatment dosage would be assigned randomly to different patients (states). Of course, in the real world, countercyclical fiscal policy is not conducted randomly and so it might raise some concerns if the funds had been disproportionately distributed to states that would have spent less (or more) on highways anyway. For example, the federal government may have channeled more highway grants to states experiencing deeper recessions and more severe budgetary crises, that is, states likely to cut government spending sharply—on highways and everything else—regardless of the grants. In this case, any difference-in-differences correlation we observe would not reflect the true casual effect of the ARRA grants.

It turns out, however, that the distribution of the ARRA highway grants was essentially independent of states’ economic conditions. To speed up disbursement of funds and to minimize the role of political influence, the Recovery Act was designed to channel the majority of funds to states through pre-existing transportation programs. For instance, the ARRA highway funds were partly distributed according to long-standing formulas that have historically been used to apportion highway grants to states under the Federal-Aid Highway Program (see Leduc and Wilson 2013). These formulas are based on information about road factors in each state that change very little over time. For instance, one key factor in these formulas is each state’s share of the nation’s highway lane-miles, a factor that has changed little since the initial planning of the Interstate Highway System in the early 1940s.

Our results indicate that each dollar of ARRA highway grants received increased states’ road spending by about 50 cents in 2009 and by about 75 cents in both 2010 and 2011. Thus, over the course of three years, the cumulative effect of one dollar of grants was nearly two dollars in higher state road spending. This greater than dollar-for-dollar response suggests that federally funded road projects may encourage complimentary state-funded road projects. For instance, new or expanded highways and bridges often spur new nearby commercial and residential development, creating demand for new local roads around that development. As we document in more detail in Leduc and Wilson (2014), these results are very robust to changes in the simple specification described above. 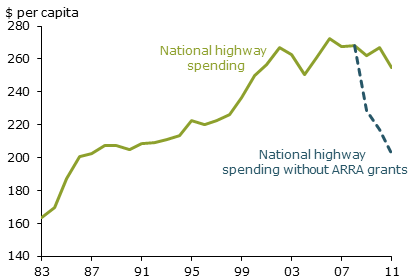 Using our results, we can construct an estimate of what the path of national highway spending would have been without the ARRA highway grants, which we report in Figure 2. Our estimates suggest that national highway spending would have declined roughly 20% percent between 2009 and 2011, similar to the decline in state tax revenues, without the additional highway grants from the Recovery Act. As discussed in Leduc and Wilson (2012, 2013), by spurring highway spending, the federal grants likely have had an important effect on economic activity, since each federal grant dollar tended to raise that state’s annual economic output by at least two dollars, which represents a relatively large economic multiplier.

Using an approach that compares differences across states between 2008 and 2011, we show that states increased their highway spending more than dollar-for-dollar in answer to the federal stimulus authorized by the American Recovery and Reinvestment Act. Without these extra funds, we estimate that national spending on highways would have declined roughly 20% between 2008 and 2011, on par with the decline in state tax revenues. Given the large multiplier effect from infrastructure spending that past studies have documented, the additional spending on highways likely had a significantly positive effect on economic activity.

Dan Wilson is a research advisor in the Economic Research Department of the Federal Reserve Bank of San Francisco.