The retirement of the baby boomers is expected to severely cut U.S. stock values in the near future. Since population aging is widespread across the world’s largest countries, this raises the question of whether global aging could adversely affect the U.S. equity market even further. However, the strong relationship between demographics and equity values in this country do not hold true in other industrial countries. This suggests that global aging is unlikely to create additional headwinds for U.S. equities.

Demographic patterns have a strong historical relationship with equity values in the United States (Liu and Spiegel 2011). In particular, the ratio of those people who are the prime age to invest in stocks to those who are the prime age to sell has historically served as a strong predictor of U.S. equity values as measured by price/earnings (P/E) ratios.

Research suggests one reason for this close relationship is a person’s life-cycle pattern of investing. An individual’s financial needs and attitudes toward risk change over the years. As retirement approaches, individuals become less willing to tolerate investment risks, so they begin to sell off stocks. Thus, the aging of the baby boomers and the broader shift of age distribution in the population should have a negative effect on capital markets (Abel 2001). In theory, global demographic changes may further impact U.S. equity values. For example, Krueger and Ludwig (2007) demonstrate that U.S. returns can import the adverse impact of population aging in other countries.

In this Economic Letter, we investigate the implications of global population trends for U.S. stock values. Other industrial countries are expected to have similarly aging populations in the next two decades, in some cases even more so than in the United States. Given that equity markets are integrated across industrialized countries (see, for example, Chan et al. 1992), one would think that this change in foreign conditions might also have adverse implications for U.S. stock values. However, our results suggest that the tight historical relationships in the U.S. data are not mirrored in other countries. Thus, global aging is unlikely to add to the demographic headwinds facing the U.S. market.

Following Liu and Spiegel (2011), we use Bloomberg’s P/E ratio for the United States, which is the ratio of the end-of-year S&P 500 Index levels and the average earnings per share over the previous 12 months. We measure the age distribution using the ratio of “middle-age” people between 40 and 49 years—the group most likely to buy stocks—to those in the “old-age” group from 60 to 69 years—the prime age to sell. We call this measure the M/O ratio. Liu and Spiegel (2011) showed that this measure of the age distribution has been highly correlated with U.S. P/E ratios, outperforming alternative demographic measures, such as the ratio of middle-age to young adults studied by Geanakopolous et al. (2004).

We extend the Liu-Spiegel study by examining the historical correlations between the M/O ratios and the P/E ratios in other industrialized countries, specifically those in the Group of Seven (G-7). For these countries—Canada, France, Germany, Italy, Japan, and the United Kingdom—we construct the M/O ratios using United Nations (UN) population data and P/E ratios from Global Financial Data. 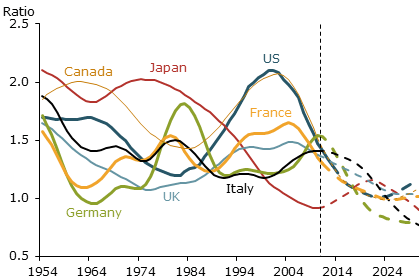 A notable exception is Japan, where the M/O ratio is expected to increase over the next 10 years, driven primarily by expected declines in the size of its old-age cohort. However, this surprising trend is limited to the specific demographic indicator we use in this study. If we broadened the indicator to the ratio of middle-aged to the combined middle- and old-aged, Japan’s pattern would also decline. Moreover, beyond 2024, population aging in Japan is expected to drop rapidly regardless of which demographic indicator is used.

In theory, the rapid aging of the global population is likely to have additional adverse implications for U.S. stock values. Ang and Maddaloni (2005) find that using the fraction of retired people in the population predicts excess returns in the four largest equity markets outside the United States. Evidence also suggests that U.S. and foreign markets are integrated. This implies that if a tight relationship exists between the M/O ratio and P/E ratios in foreign economies, their demographics are likely to impact U.S. equity values as well.

We examine the specification used in Liu and Spiegel (2011) for the remainder of the G-7 countries. In particular, we estimate the statistical relationship between the log of the P/E ratio and the log of the M/O ratio for each country. 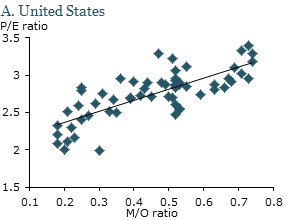 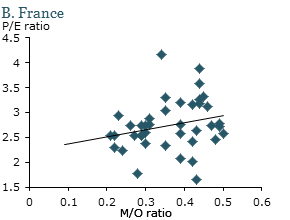 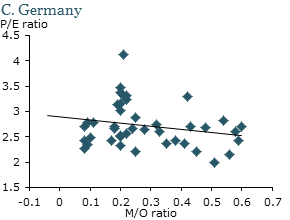 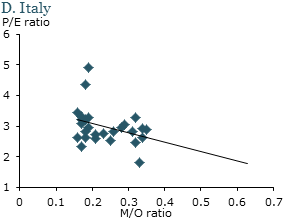 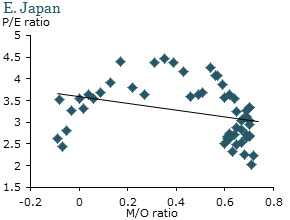 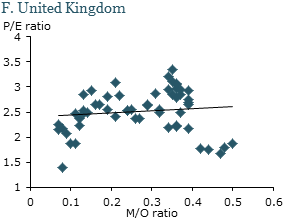 Note: The U.S. sample covers the years from 1954 to 2013. The samples of other countries range from 1954 to 2010. The solid lines denote the estimated relation between the P/E ratio and M/O ratio.

Figure 2 summarizes these results, omitting Canada to conserve space and including the United States for reference. Although the U.S. figure confirms a strong positive statistical relationship between the P/E and M/O ratios, this relationship does not hold up well for the other G-7 countries. The positive correlations for France and the United Kingdom are modest and statistically insignificant, while Germany, Italy, and Japan yield negative correlations. We also used Ang and Maddaloni’s (2005) alternative demographic measure of the retired population to predict excess returns in international equity markets. Consistent with our finding using the M/O ratio as a demographic measure, the fraction of retired people in the population has a significant negative relationship with the P/E ratio for the United States, but not for the other G-7 countries. Therefore, the correlation between demography and equity values that holds tightly for the United States cannot be extrapolated to the other G-7 countries. Formal derivations of these results are available at: /economic-research/publications/economic-letter/2014/december/baby-boomers-retirement-stocks-aging/el2014-38-technical-appendix.pdf.

Our analysis has been focused on G-7 countries. What about other countries, especially emerging market economies such as China and Korea that are increasingly important globally? Indeed, M/O ratios in both China and Korea are projected to decline over the next decade.

When we repeat our exercise using the M/O ratios and P/E ratios in China and Korea, the results are mixed, similar to those for the G-7 countries. Korea has a negative correlation between the P/E and M/O ratios. Our estimate for China shows a positive and statistically significant correlation, but it is about half the size of the U.S. correlation. Moreover, our data are very limited for China due to its relatively recent development. We only have 24 years of data for China’s P/E ratios (from 1990 to 2013), and it is likely that the Chinese government imposed tight restrictions on private equity holdings during that period. Overall, it is unlikely that the strong relationship between demographic patterns and equity valuations that we have identified for the United States can be extended to the rest of the world.

In this Economic Letter, we revisit the relationship between the aging population and U.S. equity values. Noting that global population trends are even more ominous than those in the United States, we also investigate whether the rest of the G-7 countries are expected to experience adverse effects on future stock market values similar to the United States.

We first extend the U.S. sample studied by Liu and Spiegel (2011) to include more recent data, demonstrating that the projected declines in stock values based on these data have become even more severe. Our current estimate suggests that the P/E ratio of the U.S. equity market could be halved by 2025 relative to its 2013 level.

We then focus on international concerns. Populations in the rest of the G-7 countries are expected to age even more in the next decade. We examine whether this demographic trend has adverse implications for stock values in those countries and, given the international integration in equity markets, for values in the United States as well. Our results reveal that none of the other G-7 countries demonstrate the positive and significant relationship found for the United States. We therefore do not find evidence that foreign demographic trends should be an extra drag on future U.S. equity values.

Of course, factors other than demographics may play important roles in determining future U.S. equity values. For example, it remains unclear what implications capital account liberalization in China may have for U.S. equity values. While liberalization may reduce demand for U.S. assets by the Chinese government, private Chinese citizens may respond by acquiring larger amounts of U.S. stocks to diversify their current portfolios. The expected net impact on U.S. equity values is thus unclear. There is also considerable uncertainty about the prospects for U.S. productivity growth over the near term, with some researchers suggesting that trend productivity growth has returned to a slower pace (for example, Gordon 2012 and Fernald 2014). Furthermore, facing longer life expectancy, U.S. investors may choose to draw down their equity holdings more slowly (Poterba 2014). These other factors may have important independent implications for the future of U.S. equity markets.

Abel, Andrew B. 2001. “Will Bequests Attenuate the Predicted Meltdown in Stock Prices When Baby Boomers Retire?” Review of Economics and Statistics 83(4), pp. 589–595.

Fernald, John G. 2014. “Productivity and Potential Output Before, During, and After the Great Recession.” NBER Macroeconomics Annual (forthcoming).

Krueger, Dirk, and Alexander Ludwig. 2007. “On the Consequences of Demographic Change for Rates of Return to Capital, and the Distribution of Wealth and Welfare.” Journal of Monetary Economics 54, pp. 49–87.