China’s household saving rate has risen substantially during the past two decades. Research suggests that increased job uncertainty following reforms and massive layoffs in state-owned enterprises during the late 1990s contributed significantly to the increase. Facing higher unemployment risks after the reforms, workers in state-owned enterprises have tended to save more as a precaution. A recent study estimates that precautionary saving driven by the reforms explains about a third of Chinese urban household wealth accumulation from 1995 to 2002.

In the past two decades, China has experienced double-digit annual economic growth. Equally remarkable is China’s high and rising saving rate. Chinese household savings have doubled from 15% of disposal income in 1990 to about 30% in 2010. This has far-reaching implications for both the Chinese economy and the rest of the world. Many commentators argue that China’s high saving rate reflects financial repression and the lack of a social safety net, and call for structural reforms to encourage more consumption. Others point out that, to the extent that Chinese saving exceeds domestic investment, it shows up as large current account surpluses, contributing to global imbalances (e.g., Bernanke 2006). Understanding the causes of China’s high savings is important for improving the management of China’s domestic economic policy and the coordination of that policy with the rest of the world.

Why do Chinese households save so much? The high and rising saving rate since the 1990s seems particularly puzzling because, during that period, the country has experienced rapid economic growth. According to standard consumption-savings theory, known as the permanent income hypothesis, Chinese households should behave differently, consuming more and saving less in anticipation of higher future wealth.

This Economic Letter examines the precautionary saving motive stemming from the large structural changes that Chinese households have experienced. During the past two decades, China has gone through a dramatic transformation from a closed economy under tight government control to a global economic power with greater reliance on free markets. Structural changes associated with policy reforms have liberated productivity, but have also led to increased job uncertainty. The so-called “iron rice bowl” of cradle-to-grave socialism, with guaranteed lifetime employment and benefits, was gradually abolished. Workers in state-owned enterprises (SOEs) have experienced massive layoffs. All else equal, higher uncertainty leads to more precautionary saving. In recent research, coauthors and I estimated that precautionary savings stemming from job uncertainty following the large-scale SOE reforms in the late 1990s accounted for about one-third of the overall increase in Chinese urban household savings from 1995 to 2002 (see He et al. 2013).

Before 1978, China’s central planning imposed tight government control over the economy. The government assigned most workers secure jobs in state-owned sectors, with guaranteed benefits, including near-free housing, health care, and pensions. SOE workers were treated essentially the same as workers in the government sector. 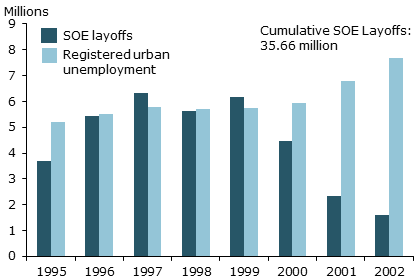 The economic reforms and open-door policy that began in the late 1970s and early 1980s started to break the iron rice bowl. China moved gradually from central planning toward greater reliance on free markets. By the mid-1990s, many money-losing SOEs had been closed or privatized. Larger and more profitable SOEs were preserved, but substantially restructured. Many redundant workers were laid off. Between 1995 and 2002, about 35 million SOE workers lost their jobs. Figure 1 shows that during the peak years in the late 1990s, SOE layoffs often exceeded total registered urban unemployment in China. (In China, laid-off SOE workers are not counted as unemployed).

The reforms were limited to the SOE sector and did not lead to material changes in job security or benefits for government workers. The massive SOE layoffs, coupled with reductions in government-provided benefits for SOE workers, fundamentally changed the perception of Chinese urban households about their future job security and income.

China’s large-scale SOE reforms provide a natural experiment to help identify large and unexpected changes in perceived job uncertainty and income risk. Before the reform, the SOE and government sector were like twins. Workers in both sectors were treated similarly and benefited from the iron rice bowl. After the reform, SOE workers lost the bowl, but government workers kept it. Consequently, we have a treatment group of SOE workers and a control group of government workers, which allows us to study the effects of changes in job uncertainty on precautionary saving.

We use data from the Chinese Household Income Project (CHIP) survey to study the relationship between job uncertainty and precautionary saving. The survey includes data on employment, education, income, expenditures, wealth, and other demographic information for a nationally representative sample of roughly 15,000 households in 1988, 1995, 2002, and 2007 (for details, see He et al. 2013). We focus on urban households in the SOE and government sectors, and restrict our sample to prime-age workers between 25 and 55. We concentrate on the 1995 and 2002 surveys, which mark the beginning and end of the SOE reform episode.

Similar to the standard model of precautionary savings (for example, Lusardi 1998), the independent variables in our model include a measure of past income risks, a household’s permanent income, and a set of demographic control variables such as age, education, and occupation. Different from the standard model, our model also includes an additional independent variable that indicates whether a household worked in the SOE sector. If the hypothesis of precautionary saving is correct, then we should observe that, all else equal, the SOE reform leads to larger increases in savings for SOE workers than for government workers because the former face greater job uncertainty.

However, this initial estimation is probably biased downward because our simple model neglects workers’ potential selection of occupations. More risk-averse workers have an incentive to move to less risky occupations. These individuals may also tend to save more because of their aversion to risk, not because of income uncertainty. Thus, after the reform, more risk-averse SOE workers may have wanted to move to the government sector, where jobs were relatively secure. This would push saving in the government sector higher and make the difference in savings between the two sectors smaller. Thus, occupational selection could cause downward bias in the estimated contribution of income uncertainty to precautionary saving (for example, Fuchs-Schündeln and Schündeln, 2005).

One could argue that, even after correcting for selection bias, our estimation is still inaccurate because the reform might have also affected household expectations of future income. If expected future income declines, then a household would save more today, although that is because of a pessimistic outlook for the future, not greater uncertainty. In contrast, if a household expects its income to rise, then it would tend to save less today.

To disentangle precautionary saving caused by job uncertainty from saving caused by a pessimistic outlook, we use a question in the 2002 survey that asks households whether they expect their income to increase, decrease, or not change over the next five years, a question that was not in the 1995 survey. By restricting our sample to households that expected their income to increase or stay unchanged, we generate a conservative estimate of precautionary saving stemming from job uncertainty. The estimation implies that, among all workers who expected their income to rise or stay the same, SOE workers on average held about eight months more financial wealth than did government workers in 2002 because of differences in perceived job uncertainty.

An important challenge for estimating precautionary saving is to identify large and unexpected changes in income uncertainty (Carroll and Samwick 1998). We use China’s large-scale SOE reform in the late 1990s as a natural experiment to identify large and unexpected variations in job uncertainty. We then estimate their effects on savings of SOE workers. In our estimation, we correct an occupational selection bias and disentangle savings induced by job uncertainty from savings driven by pessimistic income expectations. We find that breaking the iron rice bowl of SOE workers led to an increase in precautionary saving that contributed about one-third of the total increase in financial wealth held by urban households working in the SOE sector.

Carroll, Christopher, and Andrew Samwick. 1998. “How Important Is Precautionary Saving?” Review of Economics and Statistics 80, pp. 410–419.