During the past decade’s housing boom, borrowers with lower credit ratings were more likely than higher-rated borrowers to choose adjustable-rate mortgages. This raises the question of whether, amid rapidly rising house prices, lower-rated borrowers paid less attention to loan pricing and interest-rate-related factors. However, even accounting for house price appreciation, research shows these borrowers were as, if not more, responsive as higher-rated borrowers to changes in interest-rate-related fundamentals. Their tendency to choose adjustable-rate mortgages is consistent with mortgage decisions based on economic considerations, rather than just lack of financial sophistication.

When the housing market collapsed in the past decade, mortgage delinquencies and foreclosures swelled. Borrowers with lower credit ratings were hit particularly hard. During the housing boom, these riskier borrowers had increased access to mortgage financing and were more likely to choose adjustable-rate mortgages than their counterparts with higher credit ratings. Some observers argue that this tendency to choose adjustable-rate financing and the subsequent higher default rates show that this group was less financially sophisticated than borrowers with higher credit ratings.

Mortgage loans come in two types: fixed-rate (FRMs) and adjustable-rate (ARMs). In a basic ARM, the initial interest rate is set as a markup, or margin, on top of a benchmark, such as the one-year U.S. Treasury bill rate. ARM interest rates adjust periodically based on changes in the benchmark. Option ARMs give borrowers several monthly payment options: interest plus principal; interest only; or negative amortization, in which borrowers pay less than the monthly interest owed, thereby increasing the loan principal.

We develop a model to account for the factors that influence mortgage choice. Research has found that mortgage pricing and other interest-rate-related fundamentals are key. At the same time, housing market conditions, such as house price volatility and the pace of appreciation, can affect loan decisions. Studies also point to borrower characteristics, such as degree of financial constraint, attitudes towards risk, and mobility. These characteristics provide explanations for how interest-rate-related fundamentals can influence borrower mortgage choices. For example, in an influential study, Campbell and Cocco (2003) show that financially constrained borrowers, such as those with lower incomes or less money available for down payments, tend to favor ARMs because they have lower introductory interest rates. Similarly, homebuyers who expect to stay in a house a short time tend to prefer ARMs because interest rates tend to be lower in the early years.

Fixed-rate mortgages initially tend to have higher interest rates than ARMs because they are tied to long-term interest rates. For their part, long-term rates are usually higher than short-term rates because they include a term premium to compensate investors for tying up their money longer. Additionally, if investors expect short-term interest rates to rise, fixed-rate mortgage rates would be pushed above initial ARM rates. Both FRM and ARM rates include lender margins, that is, mark-ups reflecting general credit supply conditions, regional economic and housing market conditions, and individual borrower characteristics. Relative shifts in FRM and ARM margins can affect financing choices.

How much risk borrowers are willing to accept also can influence mortgage choice. Research shows that more risk-averse borrowers tend to favor FRMs or option ARMs (Campbell and Cocco 2003 and Piskorski and Tchistyi 2010). While these borrowers might find a basic ARM’s lower initial rate attractive, they prefer to avoid the risk of future sharp rate increases possible with volatile adjustable-rate financing.

Research also shows that the faster house prices are rising, the greater the probability that homebuyers will choose ARMs. In addition, rising house prices can affect the importance of interest-rate-related fundamentals when borrowers choose financing.

One view is that the housing boom was a bubble in which financing decisions for some borrowers were divorced from traditional fundamentals. Another view accepts that borrowers paid less attention to fundamentals during the housing boom, but that such a shift is consistent with rational decision-making models, given expectations of further house price appreciation. According to this view, with little or no change in house prices, homeowner decisions about moving or terminating a mortgage would generally reflect life-cycle events, such as illness, retirement, and job changes.

Rapid house price gains might change that. House price increases in the first part of the 2000s may have fed expectations of further appreciation. Homeowners expected to gain home equity as prices rose, allowing them to refinance even if they didn’t plan to move. Other buyers expected to flip houses soon after buying them. Either way, the short time expected before paying off such mortgages might make ARMs more attractive and reduce borrower sensitivity to interest-rate-related fundamentals.

Borrower risk tolerance can affect sensitivity to loan pricing, income volatility, and affordability in choosing mortgages. Borrowers with low credit ratings may be less sensitive to risk, for instance, because of lower cost of default. Thus, interest-rate-related fundamentals may be relatively less important to them than to higher-rated borrowers.

Finally, studies suggest that borrower financial literacy may affect mortgage choice. Bucks and Pence (2008) find that borrowers who choose ARMs appear more likely to underestimate or not understand how changes in interest rates would affect their loans. Hence, systematic differences in levels of financial literacy among borrowers at different risk levels could affect sensitivity to fundamentals.

Our model of mortgage choice allows us to examine how these factors affected the decisions of borrowers at different credit risk levels. We studied a sample of about 9 million first-lien U.S. home loans originated between January 1, 2000, and December 31, 2007. We allow for three mortgage choices: FRMs, basic ARMs, and option ARMs. Key model determinants are FRM and ARM margins, the 10-year Treasury term premium, expectations for short-term interest rates over time, and interest rate volatility. We include controls such as loan-to-value ratios, borrower credit risk, the two-year average change in house prices, and a measure of house price volatility. Finally, we define three credit risk groups according to borrower FICO credit rating scores: low of 660 or below, high of 760 or above, and medium of 661 to 759.

A key model feature is that it allows the impact of interest-rate-related fundamentals to change as house prices rise. Our estimates show that rising house prices have a sizable influence on the effect these fundamentals have on mortgage choice. The size of this effect differs according to borrower credit ratings. 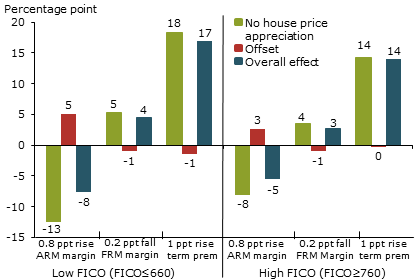 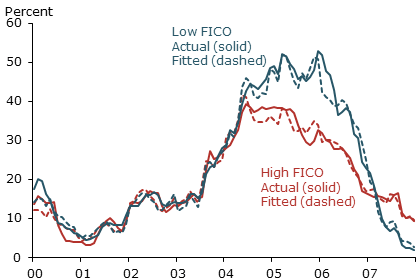 Figure 1 shows the impact of ARM and FRM margins and the term premium on the probability that borrowers with low and high credit ratings will choose an ARM. The green bars show these factor’s marginal effects if house prices were not rising. A higher margin makes ARMs less attractive, so the marginal effects are negative. This effect is greater for the low FICO group, indicating that they tend to be more sensitive to ARM mortgage pricing than the higher FICO group. Specifically, if house prices were flat, a 0.8 percentage point increase in the ARM margin would reduce the probability of low FICO borrowers choosing an ARM 13 percentage points and high FICO borrowers 8 percentage points. It is useful to compare this with the ARM share of mortgage originations, shown in Figure 2, which peaked at 50%.

But, if low and high FICO borrowers gave similar consideration to interest- rate-related fundamentals, why were low FICO borrowers more likely to select ARMs during the housing boom? Among the determinants of mortgage choice in our model, credit risk measures, including FICO scores and lender designation of borrowers as subprime, explain most of the difference in ARM shares (see Furlong et al. 2013). To illustrate this, we considered whether borrowers would have made the same mortgage choice if, all else equal, they had different credit ratings. In Figure 3, for each month in the sample, we replace the actual FICO score and subprime designation of each borrower in the low FICO group with the average score and subprime share of the high FICO group. The results of this hypothetical exercise, shown by the green line, suggest that the low FICO group’s ARM share would have been closer to that of the high FICO group had their credit risk been similar. 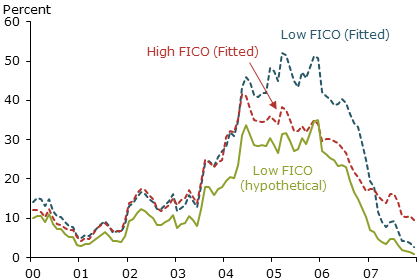 Note: Low FICO (hypothetical) shows the results if low FICO borrowers were given the scores and subprime shares of the high FICO group.

One interpretation of this result is that credit risk measures are associated with borrower level of financial sophistication. On the other hand, the findings could reflect economic decisions related to risk aversion, credit constraints, or differences in how quickly borrowers expect to refinance. In this regard, our finding that lower FICO borrowers tend to be at least as responsive to interest-rate-related fundamentals as higher FICO borrowers seem more consistent with economic considerations affecting mortgage financing decisions, and less consistent with an interpretation that emphasizes lack of financial sophistication among low FICO borrowers.

During the housing boom, rising prices dampened the influence of interest rate fundamentals on borrower mortgage choice. That was especially true for borrowers with lower credit ratings, who showed a greater tendency to choose adjustable-rate mortgages. Yet, when house prices rose rapidly, those borrowers responded at least as strongly as higher-rated borrowers to changes in fundamentals. This suggests that the greater propensity of low FICO borrowers to choose ARMs is more consistent with mortgage choice reflecting economic considerations rather than lack of financial sophistication among low FICO borrowers.

David Lang is a research analyst in the Communications and Community Engagement Department of the Federal Reserve Bank of San Francisco.

Yelena Takhtamanova is an outreach economist in the Communications and Community Engagement Department of the Federal Reserve Bank of San Francisco.