The 2007–09 financial crisis drew attention to the nature and consequences of connections among financial firms. New reporting standards set in the wake of the crisis have shed more light on these ties in current financial markets. New data are available on the magnitude of risk exposure and the types of collateral that link bank holding companies with their trading partners in over-the-counter derivatives markets. The data show that both the level of risk and diversity of collateral involved in these contracts vary widely depending on the type of counterparties.

During the 2007–09 financial crisis, the degree to which financial institutions were linked through over-the-counter (OTC) asset markets was eye-opening and has since been identified as an important contributor to financial fragility. Financial firms have long been linked through traditional lending agreements. However, the connections created by more complex contracts, such as OTC derivatives and repurchase agreements, are more relevant to the risk these firms face because they are closely tied to the values of fast-moving financial variables. For these transactions, collateral—assets that can be seized in case of nonpayment—is stated as a standard contract term to mitigate credit losses in case a partner defaults. During the crisis, rapidly falling asset values, corresponding collateral calls, and stricter collateral requirements led to large losses and subsequent funding needs among financial firms. The degree of interconnection between firms caused these effects to spread more broadly and rapidly than expected.

In the wake of the crisis, the Federal Reserve instituted new reporting requirements for bank holding companies (BHCs) with $10 billion or more in assets. These data provide insight into counterparties and collateral arrangements in these markets. In this Economic Letter, we examine the new data, particularly to learn more about the nature and diversity of collateral held by BHCs with their trading partners. In particular we find that, although BHCs have large exposure to banks, most of the collateral involved maintains minimal credit risk and is highly liquid. Conversely, contracts with corporations tend to use more diverse types of collateral, but the volume of these contracts is only one-quarter that of contracts with other banks. Moreover, the exposure to hedge fund counterparties is minimal and is collateralized by safe, liquid instruments. These initial findings suggest the new data source holds great promise for assessing future risk in OTC derivatives and other financial markets.

Our examination focuses on a broad category of arrangements known as over-the-counter (OTC) derivatives. An OTC derivative is a contract between two financial firms who agree to exchange cash flows based on the price of an underlying asset for a previously specified period of time. A classic example of such an agreement is an interest rate swap, in which one party agrees to exchange interest on a notional dollar amount at a prespecified, fixed rate for another party’s interest earned on that same amount based on a floating market interest rate. OTC contracts are commonly used by large U.S. banks and are not subject to the same collateral requirements as some other agreements among firms.

OTC derivatives may be consolidated through a master swap agreement between parties, as discussed in Duffie (2011) and Gregory (2010). These agreements usually conform to the standards set by the International Swaps and Derivatives Association (ISDA). Each agreement includes information not only on what type of collateral the counterparties can post, but also on the frequency and way collateral should be posted. For example, Gregory (2010) notes that collateral posted as part of derivatives contracts are generally valued at the current market rate. Such requirements are an important part of OTC deals, since posted collateral serves as a buffer against credit losses.

Many factors can lead an institution to seek additional collateral from an already collateralized trade with a counterparty, a process known as a collateral call. In general, they fall into three categories. First, the amount of risk exposure in the trade might increase relative to the collateral already posted. This is generally due to recent price changes for the asset underlying the derivative. A second possibility arises when the credit quality of a counterparty declines, increasing the likelihood of default. The most famous example of this type of collateral call was the collapse of Lehman Brothers Holdings in the fall of 2008. Third, the value of the collateral already posted might drop relative to the amount of risk exposure. As discussed in Duffie (2011) and Gorton and Metrick (2012), this last form of collateral call was ubiquitous during the most recent crisis. Collateral calls not only became more frequent as asset prices declined, but the range of acceptable collateral was also severely restricted to only the most liquid and safe securities. This exacerbated the stress and “fire sales” that financial markets were already witnessing.

Because reporting requirements weren’t capturing data on bank interconnectedness or BHCs’ derivative portfolios before the crisis, researchers have had fewer data available to explore these types of events. Since then, revised Federal Reserve reporting requirements have gathered a wealth of data on these agreements. We use this new source to shed some light on more recent transactions, specifically what types of collateral banks are now receiving most frequently across different sets of counterparties for different types of OTC exposures.

Starting in the second quarter of 2009, BHCs with total assets of $10 billion or more were required to fill out a new reporting schedule of the Consolidated Financial Statements for Bank Holding Companies (FR Y-9C). Schedule HC-L covers the total net credit exposure between a set of counterparty types, as well as what types of collateral they post for their OTC derivatives. The instructions for the FR Y-9C define the process for determining net credit exposure as follows: “Determine whether a legally enforceable bilateral netting agreement is in place between the reporting bank holding company and the counterparty. If such an agreement is in place, the fair values of all applicable derivative contracts with that counterparty that are included in the scope of the netting agreement are netted to a single amount, which may be positive, negative, or zero.” Moreover, BHCs are required to distinguish exposures across five counterparty types: banks and securities firms, monoline financial guarantors, hedge funds, sovereign governments, nonfinancial corporations, and all others. The category for monoline financial guarantors includes companies that insure principal and interest payments to bondholders when a bond issuer defaults.

As described earlier, collateral calls are a key way to guard against risk exposure in OTC contracts. Therefore, banks are also required to report the dollar amount of each collateral type posted in these agreements. The seven types of collateral are U.S. currency, foreign currency, U.S. Treasuries, U.S. government agency debt, corporate bonds, equity securities, and all others. Table 1 gives aggregated data for collateral and trading partners in the market from the second quarter of 2009 through the first quarter of 2013. The top panel shows the type of collateral BHCs accepted according to its share of the total dollar amount of collateral, and the bottom panel shows the types of counterparties involved with BHCs according to the share of the total dollar amount of transactions by all reporting banks. We count only those BHCs that reported their transactions for the entire period we study, which includes 84 institutions.

In our analysis, we first distinguish between whether banks are dealers or not. As defined in Duffie (2011), dealer banks serve as the main providers of securities and OTC derivatives for market participants. As such, we should expect BHCs that operate as dealer banks to face larger net credit exposure than other banks. Figure 1 corroborates this, displaying the average net exposures of dealer BHCs compared with non-dealers. On average, dealer banks have exposures more than 10 times larger than non-dealer BHCs. This magnitude confirms dealer banks are the major recipients of collateral, so we focus on these institutions for the remainder of our analysis. 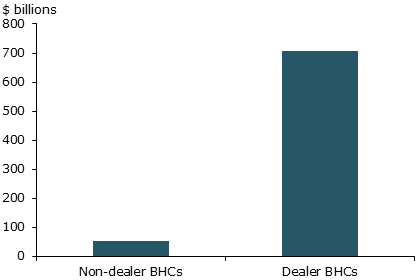 We concentrate on the three largest sets of counterparties: banks, corporations, and hedge funds. In Figure 2, we show the average net credit exposure for each counterparty type across all dealer BHCs. The figure clearly shows that on average such institutions are faced with much larger exposures to other banks and corporations than to hedge funds. 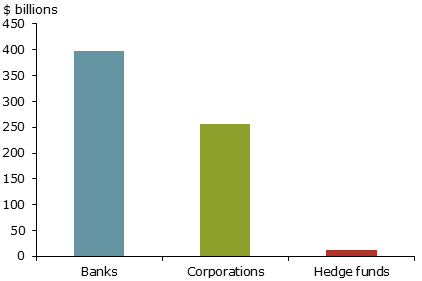 Although net credit exposure can be very informative for measuring interconnectedness in the derivatives markets, it gives no insights into how dealers manage risk. As mentioned earlier, a natural way to mitigate such risk would be to monitor the quality and amount of posted collateral. Figure 3 summarizes dealers’ positions in their contracts with other types of institutions in terms of risk exposure and collateral. 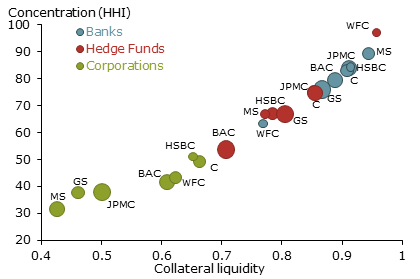 In Figure 3, the size of a circle indicates the relative size of the net credit exposure for dealers’ average exposures to corporations (green dots), hedge funds (red dots), and banks (blue dots). The figure also shows a measure of the concentration of collateral across types on the vertical axis, with all cash collateral folded into a single category. The higher the value on this axis, the less diversified the average collateral pool is for a particular counterparty. The horizontal axis measures the shares of collateral according to how liquid it is, with higher values being more and lower values being less liquid.

We first note that collateral posted by corporations is usually less concentrated in one type, and usually comes from less liquid assets when compared with other counterparty types. Second, for hedge funds, although cash is the most popular form of collateral, Treasuries and other types of collateral are also widely used. This corroborates the findings of Gorton and Metrick (2012), since this category encompasses assets whose prices were severely affected during the financial crisis, such as commercial and residential mortgage-backed securities and collateralized debt obligations. Note however that the aggregate exposure to hedge funds is significantly smaller than the amounts observed for banks and corporations.

In this Letter, we have shown that bank holding companies have large exposures to other banks and corporations in the market for over-the-counter derivatives. However, hedge funds and banks generally post collateral that is concentrated in very liquid and safe assets. In particular, bank counterparties seem to primarily use cash as collateral. Corporations post a much more diversified collateral pool, but the value of their posted collateral, as shown in the table, is roughly 75% less than that of banks. Contrary to common belief, the new data also show that banks’ trading exposure with hedge funds not only maintain, on average, more collateral than the value of the exposure, but they also hold a large percentage of their collateral in the form of cash.

This type of information can play an important role in understanding the linkages among derivatives markets and provide valuable insights for formulating policy to ensure financial stability. Based on initial data from the new reporting requirements, the collateral pools held by U.S. bank holding companies since 2009 appear much more adequate than they were leading up to the financial crisis. Clearly, there are many more aspects of the OTC market and other markets to examine, but having these data available will make it significantly easier for researchers and regulators to understand the structure and dynamics of financial markets.

Hamed Faquiryan is a research associate in the Economic Research Department of the Federal Reserve Bank of San Francisco.

Marius Rodriguez is an economist in the Economic Research Department of the Federal Reserve Bank of San Francisco.