Helping the public understand how monetary policy is conducted is an important goal for the Federal Reserve. One way to measure people’s understanding is through surveys that show household expectations for the economy. Responses from the Michigan survey show some groups of households appear to hold beliefs consistent with basic features of U.S. policy. In particular, households with higher incomes and more education appear to better grasp how interest rates relate to inflation and unemployment, particularly during times of labor market weakness.

The Federal Reserve often emphasizes the need to communicate to improve people’s understanding of monetary policy. Fed officials reach out to the public through speeches (Bernanke 2010 and Yellen 2013), lectures (Bernanke 2012), and educational programs for the general public (FRB San Francisco 2014). As the argument goes, greater communication and transparency about what the Fed is doing and why should help households and firms make better-informed decisions about setting prices and wages, which in turn should improve policy effectiveness.

The main challenge in evaluating the public’s understanding is that the Federal Reserve does not follow one formal rule in working toward its dual mandate of stable prices and maximum employment. However, some simple rules, such as the Taylor rule, mimic reasonably well how the Fed has conducted U.S. monetary policy at certain times. A simple version of this rule suggests that policy rates should correlate positively with inflation and negatively with unemployment.

This Economic Letter assesses whether the public understands the basic features of monetary policy according to how well people’s expectations match this simple rule. We combine households’ answers to survey questions about what they expect for future inflation, unemployment, and interest rates. We find that household awareness depends on both demographic characteristics and on the business cycle. Higher income and more educated households have a better grasp of relationships and changes in monetary policy. In addition, the negative relationship between unemployment and interest rates that is apparent in actual data only shows up in household answers during periods of labor market weakness.

The Taylor rule and the Michigan survey questions

Taylor (1993) showed that, although the Fed does not formally follow any specific rule, U.S. monetary policy since the mid-1980s can be approximated by a simple rule—a “Taylor rule”—that relates interest rates to inflation and unemployment rates. According to one version of this rule, policy interest rates should respond to deviations of inflation from its target and unemployment from its natural rate (Rudebusch 2010). This simple rule implies that the policy rate correlates positively with inflation and negatively with slack in economic activity, so that the policy rate rises as inflation rises and as the unemployment gap narrows.

While these relationships are well known among researchers, it’s difficult to determine whether the general public has the same basic understanding. To explore this, we turn to the Survey of Consumers conducted by Thompson Reuters and the University of Michigan, known as the Michigan survey. This survey interviews U.S. households about their personal finances and demographic characteristics, and also asks about their expectations for changes in interest rates, inflation, and unemployment over the next 12 months.

Since the Taylor rule appears to mimic how the Fed conducts monetary policy for some periods of time, we can use these household expectations to assess if their answers are consistent with the basic relationships implied by the Taylor rule.

As a basis for our study, suppose that the Fed’s target for the federal funds rate depends positively on current inflation and negatively on current unemployment, and changes only with these two variables. Then, if people in the survey predict that unemployment will go down and inflation will go up in one year, to be consistent with the Taylor rule, they would have to answer, more often than not, that the Fed will tighten monetary policy over the same period. We emphasize that our analysis does not classify answers as correct or incorrect, but only searches for relationships across households’ answers (see Carvalho and Nechio 2014).

The sample for our initial analysis starts in August 1987; this coincides with the beginning of Alan Greenspan’s tenure as chairman of the Federal Reserve Board, since the Taylor rule came to be seen as a good approximation for U.S. monetary policy for much of this period. The Taylor rule does not allow for the federal funds rate to fall below zero. As such, and because the survey questions pertain to 12-month forecasts, we end the sample in December 2007, a year before short-term interest rates in the United States had essentially dropped to zero.

We pool survey answers across all households and estimate the relationships between expected changes in interest rates, inflation, and unemployment rates. We then compare our findings with results from actual changes using monthly data on the three-month Treasury bill rate, 12-month consumer price index (CPI) inflation, and the civilian unemployment rate.

Table 1
Estimated relationships of interest rates with inflation and unemployment 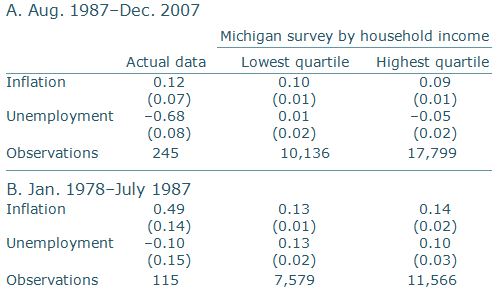 The top part of Table 1 shows our first set of results, along with their standard errors in parentheses. Survey results are split between households in the lowest and highest income groups, which generally resemble data for lower and higher education levels. For our analysis, we focus only on whether these estimated relationships have a positive or negative sign.

The actual data in the first column display the expected pattern. Changes in interest rates correlate positively with changes in inflation and negatively with changes in unemployment. The Michigan survey data show a strong positive relationship between answers regarding inflation and interest rates for both income groups. The unemployment relationship, however, is only negative for higher income households.

Deviations from the Taylor rule in the mid-2000s

While the Taylor rule usually provides a good description of how U.S. monetary policy is conducted, there can be sizable deviations at times. During the mid-2000s, in particular, Fed policy arguably deviated from the Taylor rule. From August 2003 to May 2004, the Fed kept a constant target of 1% for the federal funds rate and resorted to “forward guidance,” communicating that the target rate was expected to be maintained at this level for a “considerable period.” In June 2004, the Fed began to remove monetary policy accommodation at a pace it said was “likely to be measured,” and raised its target for the federal funds rate by 25 basis points (Federal Reserve Board 2003, 2004). The indication that the pace of monetary tightening would likely be measured and the 25-basis-point increases in its policy target continued until the end of 2005.

To test whether households perceived any change in the conduct of monetary policy at that time, we check whether our estimated relationships using the Michigan survey data also changed. For this, we focus on higher income households and pool results by year of the interview. If household answers reflect their perceptions of monetary policy, their responses should change during periods of deviation from a Taylor rule. 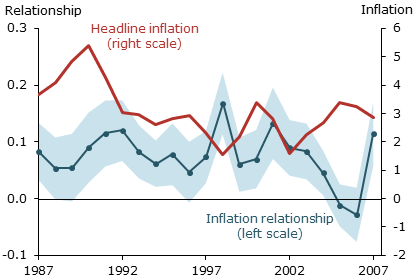 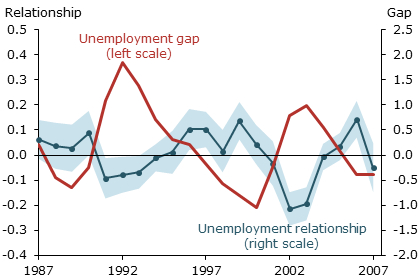 Consistent with the idea that households’ responses reflect their perceptions of monetary policy, Figure 1 shows a strong positive relationship between interest rates and inflation for most of the sample, except during the mid-2000s when it falls substantially and becomes not much different from zero.

The estimates for the relationship between unemployment and interest rates also yield an interesting pattern, varying systematically over the business cycle. The negative relationship is much stronger during periods of labor market weakness. This could show that households believe policy varies depending on the economy, or it could simply show that households become more attentive to how the policy rate and unemployment are related during economic downturns.

Another way to judge if households are aware of how monetary policy is conducted is to view Michigan survey data from before 1987, that is, before the relationships described by the Taylor rule came to be seen as a good proxy for U.S. monetary policy.

Some households appear to hold beliefs consistent with basic features of U.S. monetary policy. In particular, during times of economic slack households with higher incomes seem to form expectations in accordance with a Taylor rule.

Regardless of what drives the business cycle variation in Michigan survey responses, we can conclude that some people’s beliefs have changed as U.S. monetary policy has evolved. This suggests some households, particularly those with higher income and more education, understand how inflation, unemployment, and interest rates are related as if they had some basic understanding of U.S. monetary policy.

Carlos Carvalho is an Associate Professor of Economics at Pontifical Catholic University of Rio de Janeiro.

Federal Reserve Board. 2004. “Minutes of Federal Open Market Committee,” May 4.