Some types of jobs lost during recessions are never recovered, which suggests some unemployed workers must change careers. However, data on hiring during recessions shows the fraction of unemployed workers who change their industry or occupation declines rather than increases. This reflects in part that, when unemployment is high, employers can find applicants with qualifications that closely match job openings. Thus, the rate of overall job growth affects the pace of job market recoveries more than the need for workers to reallocate across sectors.

During the Great Recession the unemployment rate began rising substantially, climbing to 10% in the aftermath before falling slowly to slightly under 7% in recent months. Debate about the main causes underlying this slow job market recovery has resulted in two very distinct views.

One view is that many of the jobs created during the boom in real estate, construction, and finance were subsequently lost in the recession and will not come back as the economy recovers. As a consequence, much of the labor market recovery reflects workers changing careers. That is, workers previously in construction, real estate, and finance-related industries and in occupations where jobs were plentiful before the recession must change to jobs in other sectors and positions where job growth is currently concentrated.

The second view is that rising unemployment resulted from a more broad-based shortfall in demand and economic activity that affected workers across a whole set of industries and occupations. Contrary to the first view, the labor market recovery need not be accompanied by an increase in workers changing careers. Instead, overall job creation will replenish the jobs lost during the downturn.

In this Economic Letter, we shed more light on these two competing views. To do so, we analyze the rates at which unemployed and employed workers switch careers. We first measure the fraction of workers that changed jobs and were hired into a different industry or occupation. We then compare how these rates of career change among both unemployed and employed workers fluctuate during recessions, recoveries, and booms.

Hires from different industries and occupations

We use the Current Population Survey (CPS), the monthly survey that is the basis for U.S. unemployment statistics, to calculate the rate at which people change careers. Career changes include workers who change industries, such as an accountant moving from a job in a bank to one in a construction company, as well as workers who change occupations, such as an accountant who becomes a construction worker.

We separate career changes into two types depending on a worker’s employment status immediately before being hired. The first type is based on hires out of unemployment, which consists of people who were unemployed in the month before being hired into a new job. We use survey information about a worker’s industry and occupation immediately before and after an unemployment spell to determine how many workers changed careers out of unemployment.

The second type is based on job-to-job hires, which consists of people who reported being employed in the month before being hired into a new job. Comparing industries and occupations across the two consecutive jobs allows us to determine whether a worker changed careers without an intervening spell of unemployment. Our second measure begins in 1994, the year the CPS began collecting this information.

The level of detail we use to distinguish industries and occupations also affects our measure of career change. For example, at the broadest, most aggregate level, a worker who switches from being a travel agent to working as a cashier at a supermarket does not switch occupations because both are part of “sales and related occupations.” However, at a more detailed, disaggregated level, where we distinguish between sales representatives and retail sales workers, this would be classified as an occupation switch and thus a career change. To show that the patterns we find in the data are not specific to the level of detail, we present our results at the most aggregated, or major, and the most disaggregated, or code, levels.

Figure 1
Hires out of unemployment that change careers 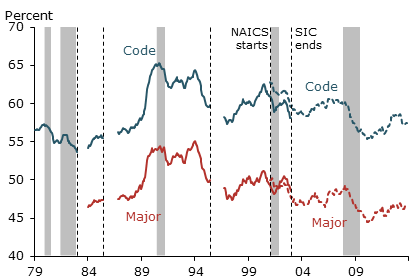 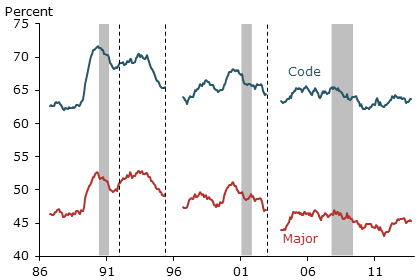 Hires out of unemployment

Figure 1 shows the fraction of hires out of unemployment that change industries (panel A) and occupations, (panel B). The shaded areas depict recessions. Because industry and occupation definitions and classification systems have changed over time, data are not continuous for the period we study, as shown by the vertical dashed lines in 1983, 1992, and 2003. Two other dashed lines in 1985 and 1995 show periods when we cannot link CPS respondents across surveys.

The common cyclical pattern between these series clearly shows that the fraction of unemployed people who change careers upon getting rehired declines during recessions. All the recessions in our sample follow this pattern, from those in the early 1980s to the Great Recession that started in 2007. Likewise, the figures show that career changes increase when the labor market is strong, as at the end of the 1980s and the 1990s.

The fact that the rate of career change for unemployed workers declines during recessions seems counterintuitive, but there are several possible explanations for this phenomenon. These explanations can be divided into two broad categories. The first focuses on why those unemployed during recessions are less likely to pursue a change in career. For example, Carrillo-Tudela and Visschers (2013) consider aggregate unemployment fluctuations based on unemployed workers’ decisions to change occupations. They argue that in recessions, two factors reduce the incentives for unemployed people to change careers. One, though their job opportunities in their old careers might have dried up during the recession, it is also harder to find jobs in the alternate careers that they consider pursuing. And two, workers take into account that they may be less likely to start a particularly successful career path during a recession, which further reduces their incentives to change careers.

The second category emphasizes that employers become more picky in their hiring decisions during recessions (see, for example, Sedláček 2014). As a result, firms hire workers with more relevant job experience during recessions than they do during expansions. Hence, a higher fraction of hires would have been previously employed in similar industries and occupations.

There is one major caveat concerning our measurement of career change. We do not observe whether the unemployed who do not get hired during the sample period end up making a career change. Further, we do not know the career choices of those unemployed who give up looking for a job and drop out of the labor force. Still, the evidence in Figure 1 strongly indicates that a smaller fraction of the unemployed change careers during recessions than during upswings.

Our observations suggest that recessions involve a smaller degree of structural reallocation across different job markets, which forces some unemployed workers to change careers, than expansions. Instead, increases in unemployment during recessions mainly reflect a broad-based drop in the demand for labor rather than an increase in labor market frictions due to the need for workers to switch careers. Consequently, labor market recoveries appear to largely involve unemployed workers finding jobs similar to those they previously held.

Figure 2
Hires from unemployment, other jobs that change careers 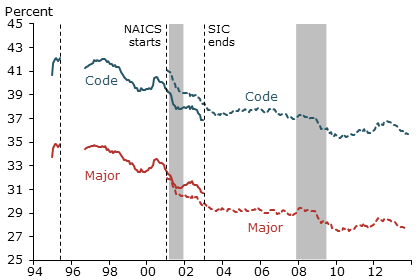 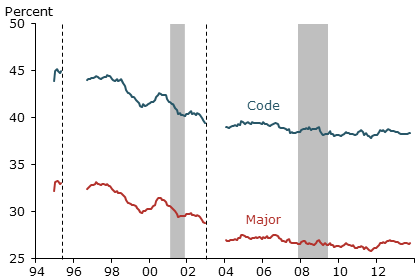 In Figure 2 we combine the data for hires that come from unemployment and those that come directly from another job. The figure shows the fraction of those hires that changed industry (panel A), or occupation (panel B). Though less pronounced, these data show the same cyclical pattern as in Figure 1. That is, they show career changes are more prevalent among those who start a new job during expansions rather than during recessions. Overall, this is consistent with the occupational mobility patterns in research by Moscarini and Vella (2008) and evidence on industry mobility from Murphy and Topel (1987). Interestingly, in the Great Recession, there is a clear drop in the fraction of hires that were previously employed in a different industry (panel A), while the fraction of hires that changes occupations (panel B) appears to drop only slightly.

For this combined measure of hires, the rate versus level distinction turns out to be unimportant. During recessions, the decrease in the number of job-to-job hires is greater than the increase in the hires out of unemployment. The net result is that the total number of hires declines in recessions. Consequently, both the rate at which new hires change careers and the number of new hires that change careers decline. Overall then, the extent of career changes declines during recessions, including during the Great Recession.

A prominent view in economics associates recessions with times when productive resources are reallocated to new and better uses. The increase in unemployment during these downturns is often thought to reflect, at least in part, this reallocation. Intuitively, this view also implies that proportionally more workers, especially among the unemployed, would switch careers to find work in different industries and occupations during recessions. If this were the case, a larger proportion of hires during recessions should have been previously employed in a different sector or occupation. However, our data suggest otherwise. The fraction of hires during recessions instead reflects a drop in the rate of career changes. Our findings point to a broad-based decline in the demand for labor as the main driver of run-ups and persistence in the unemployment rate, including during and after the Great Recession of 2007-09.

Carlos Carrillo-Tudela is an associate professor in economics at the University of Essex, United Kingdom.

Ludo Visschers is a Chancellor’s Fellow in the School of Economics at the University of Edinburgh and an assistant professor in economics at Carlos III University in Madrid, Spain.