In 2013, the Federal Reserve publicly described conditions for scaling back and ultimately ending its highly accommodative monetary policy. Some emerging market countries subsequently experienced sharp reversals of capital inflows, resulting in sizable currency depreciation. But others did not. Variations in financial market reactions from one country to another appear to have been related to differences in economic conditions, which partly reflected a country’s policies before the Fed’s tapering comments.

In the wake of the global financial crisis and recession of 2007–09, the Federal Reserve carried out a series of large-scale purchases of government and asset-backed securities to lower longer-term interest rates and provide additional stimulus to the economy. Following then-Chairman Ben Bernanke’s May 22, 2013, congressional testimony about the possibility that the Federal Reserve would begin scaling back these purchases—a reduction widely known as tapering—some financial market participants revised their beliefs about when the central bank would begin normalizing its highly accommodative monetary policy. Market participants moved forward the dates they expected the Fed to start reducing its large-scale asset purchases as well as the dates when they expected it to start raising the federal funds rate, its short-term policy interest rate (Bauer and Rudebusch 2013).

However, the distribution of these capital movements was not uniform. Patterns of capital outflows appeared to be related to a country’s macroeconomic fundamentals. Those in turn reflected to some degree the policies a country pursued during the years that followed the global financial crisis. This Economic Letter assesses how recent emerging market capital movements are related to a country’s economic situation. In particular, countries with larger external and internal imbalances during the low interest rate period faced larger currency depreciations when interest rate expectations for advanced economies tightened. 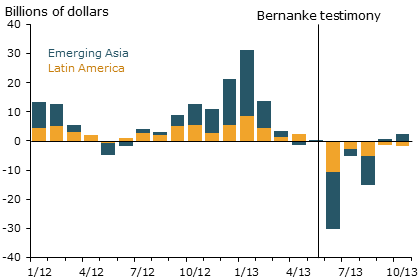 Capital inflows to emerging economies peaked in January 2013, slowed in the first half of 2013, and sharply reversed in the months immediately following Chairman Bernanke’s May comments. Figure 1 shows capital flows to emerging Asia and Latin America (from Powell 2013a). Foreign investments started to decline before May, perhaps in response to the improvements in U.S. economic fundamentals that motivated consideration of asset purchase tapering in the first place. Nonetheless, large capital outflows from emerging Asia and Latin America appear to have coincided with the May testimony.

These large capital outflows indicate that investors interpreted Chairman Bernanke’s statements as implying an impending reduction in monetary accommodation. A number of Fed policymakers subsequently tried to reassure investors that actual removal of monetary policy accommodation was still far off (for example, Dudley 2013, Williams 2013, and Powell 2013b). In addition, they stressed that the liftoff date for moving the federal funds rate above its lower bound near zero was not linked to the pace of tapering of asset purchases. Tapering would merely slow the rate at which the Fed would be adding assets to its portfolio. Despite these qualifications, the taper scare apparently prompted an overall reduction in investment in riskier assets, including assets from emerging economies.

Role of weak fundamentals in the severity of capital flow reversals

Recent research in international finance has found that sharp retrenchments of capital flows, known as  sudden stops, depend not only on external factors, such as changes in expectations for advanced economy monetary policies, but also on internal domestic macroeconomic fundamentals (for example, see Forbes and Warnock 2012, and Edwards 2007). In particular, sudden stops in capital flows can reflect disappointments in a country’s domestic economic growth or concerns about its growing internal and external imbalances.

Fiscal and current account balances are commonly used measures to assess respectively a country’s internal and external balances. The fiscal balance is the difference between government revenues and expenditures. A negative fiscal balance, i.e., a fiscal deficit, is a measure of internal imbalance because it implies an increase in public borrowing. The current account balance includes a country’s trade balance, that is, its exports minus imports, plus international cash transfers, and earnings on foreign investments minus payments to foreign investors. A country that runs a current account deficit consumes and invests more than it produces, and accumulates a negative net foreign asset position with other countries.

Combinations of disappointing output growth and increases in external and internal imbalances may jeopardize the perception of global investors that a country will be able to honor its outstanding liabilities. This can generate a downward reassessment of expected investment returns in that country and fuel a retrenchment of capital inflows.

The onset of a sudden stop may itself cause difficulties that ratify investor expectations of lower returns. Thus, sudden stops may be costly for emerging market countries. They create pressure for countries to depreciate their currencies, which can boost inflation. Fighting inflation may require tighter monetary policy, which could further reduce growth. In addition, currency depreciations leave countries less able to service debts denominated in foreign currencies. 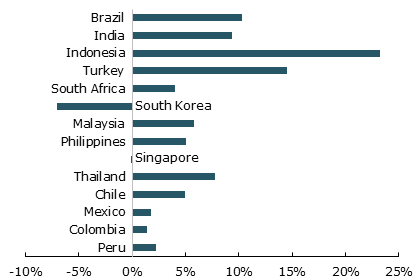 The episode of capital flow retrenchment noted earlier seems to confirm the predictions in the international finance literature about the effects of sudden stops on capital inflows and emerging market currencies. Figure 2 compares the magnitude of currency depreciation among a sample of emerging market countries from May to December 2013, including Brazil, India, Indonesia, Turkey, South Africa, South Korea, Malaysia, Philippines, Singapore, Thailand, Chile, Mexico, Colombia, and Peru. The first five have been referred to in the financial press as the “fragile five,” because they are seen as more dependent on foreign capital flows and as exhibiting higher risk of currency depreciation against the dollar (see Morgan Stanley 2013).

The sharp differences in the magnitude of exchange rate depreciation experienced by these emerging market countries suggest that investors appear to have reacted differently to the news concerning Federal Reserve tapering from country to country, with the fragile five experiencing larger depreciation rates than other emerging market economies. As suggested by the literature, domestic factors probably influenced the different responses observed in the data. In particular, a country’s domestic economic conditions, together with its relative internal and external imbalances, are likely to have influenced the relative severity of retrenchment in capital flows following the news about Fed tapering. 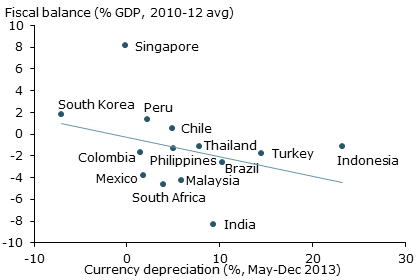 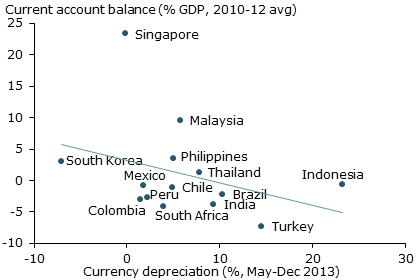 To investigate this, I compare the magnitude of observed exchange rate depreciation with a country’s macroeconomic fundamentals. I focus on fiscal and current account balances. Figure 3 shows the rate of currency depreciation between May and December 2013 and the average fiscal balances as percentages of gross domestic product between 2010 and 2012. Figure 4 shows depreciation and the average current account balance over the same periods. Both figures include a trend line that reflects the best fit between the two measures.

The Figure 3 trend line shows a negative relationship between a country’s fiscal position during the 2010–12 period and its rate of currency depreciation between May and December 2013. That is, emerging market countries with weaker fiscal positions before the tapering news experienced much greater currency depreciation than their counterparts with surpluses and smaller deficits. The fragile five are well represented in this group, exhibiting higher deficits and more severe currency depreciation. A similar pattern is observed in Figure 4, with the trend line showing a negative relationship between depreciation rates and current account balances. Countries running larger current account deficits during the 2010–12 period faced greater depreciation of their currencies after the May 22 testimony.

These results indicate that the large capital outflows shown in Figure 1 were concentrated in countries where economic fundamentals were weaker. While the sharp reversal of sentiment about emerging markets prospects and the resulting retrenchment in capital flows may have been triggered in part by expectations regarding Fed policy, the extent of changes in expectations and the magnitude of the adjustments for individual emerging market economies varied systematically based on their fundamentals. In addition, the correlations observed in the data demonstrate that outflows from countries with weaker fundamentals began well before Chairman Bernanke’s May 22 testimony. The remarks seem only to have intensified a pattern that was already evident in the data.

Interestingly though, more recent movements in global capital flows appear to have been less sensitive to advanced economy monetary policy announcements. In December 2013, when the Fed formally announced it would begin tapering asset purchases, the immediate market response was muted. Currencies of emerging market countries changed little in December, suggesting that market participants had already priced in much of the expected policy change.

International capital inflows are related to external factors as well as to a country’s internal conditions. While monetary policies in developed economies affect investor decisions, a country’s domestic economic conditions also play a role in shaping investment flows. Capital inflows to some Asian and Latin American emerging markets started to slow by January 2013. This trend was intensified after Chairman Bernanke’s May 22 speech. However, capital retrenchment was not uniform and appears to have been related to a country’s internal and external imbalances.

As advanced economies recover, monetary authorities have made clear that they intend to return to more conventional policies. The differences from one emerging market economy to another in the difficulties experienced when the Fed began to discuss tapering asset purchases highlight the sensitivity of global investment patterns to domestic conditions. They demonstrate how important it is for emerging market countries to improve their domestic fundamentals as global monetary conditions return to normal.