This Economic Letter examines the interplay between private credit and public debt in financial crises in 17 advanced economies over the past 150 years. Although high levels of public debt seldom trigger financial crises in advanced economies, the government’s fiscal position greatly influences the depth of the recession, the speed of the recovery, and the tempo of fiscal rebalancing. In particular, it appears that keeping public debt low is a good insurance policy in case a financial crisis occurs and the financial sector needs to be rescued. A low level of debt coming into a crisis also gives the public sector more latitude to make up for the fall in demand. The ability of the public sector to provide fiscal stimulus after a crisis hits can make a recession less painful.

The narrative of the recent the global financial crisis in advanced economies falls into two camps. One camp emphasizes private-sector overconfidence, overleveraging, and overborrowing; the other highlights public-sector profligacy, especially with regard to countries in the periphery of the euro zone. One camp talks of rescue and reform of the financial sector. The other calls for government austerity, noting that public debt has reached levels last seen following the two world wars. 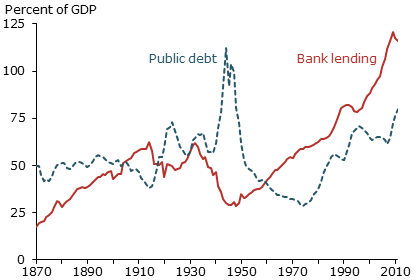 Figure 1 displays the average ratio of bank lending and public debt to GDP for 17 industrialized economies (Australia, Belgium, Canada, Denmark, Finland, France, Germany, Italy, Japan, the Netherlands, Norway, Portugal, Spain, Sweden, Switzerland, the United Kingdom, and the United States). Although public debt ratios had grown from the 1970s to the mid-1990s, they had declined toward their peacetime average before the 2008 financial crisis. By contrast, private credit maintained a fairly stable relationship with GDP until the 1970s and then surged to unprecedented levels right up to the outbreak of the crisis.

Spain provides an example of the woes in the euro zone periphery and the interplay of private credit and public debt. In 2007, Spain had a budget surplus of about 2% of GDP and government debt stood at 40% of GDP (OECD Country Statistical Profile). That was well below the level of debt in Germany, France, and the United States. But by 2012, Spain’s government debt had more than doubled, reaching nearly 90% of GDP, as the public sector assumed large losses from the banking sector and tax revenues collapsed.

Thus, what began as a banking crisis driven by the collapse of a real estate bubble quickly turned into a sovereign debt crisis. In June 2012, Spanish 10-year bond rates reached 7% and, even at that rate, Spain had a hard time accessing bond markets. Once sovereign debt comes under attack in financial markets, banks themselves become vulnerable since many of them hold public debt as assets on their balance sheets. The new bout of weakness in the banking system feeds back again into the government’s future liabilities, setting in motion what some have called the “deadly embrace” or “doom loop.”

The conundrum facing policymakers is this: Implement too much austerity and you risk choking off the nascent recovery, possibly delaying desired fiscal rebalancing. But, if austerity is delayed, bond markets may impose an even harsher correction by demanding higher interest rates on government debt. Matters are further complicated for countries in a monetary union, such as Spain. Such countries do not directly control monetary policy and therefore cannot offset fiscal policy adjustments through monetary stimulus by lowering domestic interest rates. In addition, central banks in these countries have limited capacity to stave off self-fulfilling panics since their lender-of-last-resort function evaporates.

Fluctuations in fiscal balances over the business cycle are natural. As economic activity temporarily stalls, revenues decline and expenditures increase. With the recovery, fiscal balances typically improve. But the debate on what is a country’s appropriate level of public debt in the medium run continues to rage. It is unclear whether high debt is a cause or a consequence of low economic growth. That said, public debt is not a good predictor of financial crises.

Financial crises are notoriously unpredictable. Jordà, Schularick, and Taylor (2013a) show that a private credit boom during an expansion raises the likelihood of a subsequent financial crisis. In fact, several measures proposed after the 2008 global financial crisis aim to increase bank capital buffers in times of economic expansion to slow down the creation of credit.

What about public finances? During an expansion, how does the accumulation of public debt compare with a private credit boom in predicting financial crises? Should macroprudential policy, that is, policy designed to forestall financial crises, aim to reduce fiscal imbalances in an expansion, just as it seeks to put the brakes on private credit growth? Using historical evidence from 17 advanced economies, we find that a deteriorating fiscal position is not usually predictive of financial crises in advanced economies (see Jordà, Schularick, and Taylor 2013b). Figure 1 is consistent with this finding. Prior to the 2008 crisis, the average level of public debt across the 17 countries in our sample had been declining, whereas private credit had continued to increase. 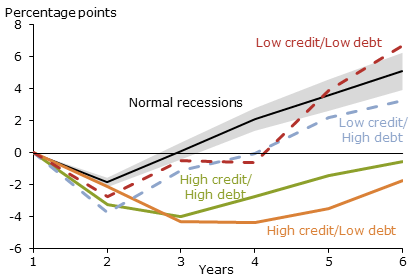 Figure 2 provides more forceful evidence. It shows how private credit buildup and public-sector deficits during an expansion affect the depth and speed of recovery from a financial crisis. By averaging across countries over time, Figure 2 displays the path of a normal recession. The figure then stratifies the path of recessions triggered by financial crises depending on whether private credit and the public sector grew above or below their historical means during the expansion. The stratification results in four possible recession/recovery paths, depending on whether both private credit and public debt grew above or below the mean: low credit and high public debt; low credit and low debt; high credit and low debt; high credit and high debt.

Figure 2 neatly demonstrates that a recession is made worse and a recovery slower when a credit boom is large in an expansion, regardless of the behavior of public-sector debt. The recession/recovery paths under scenarios of high growth or low growth of public-sector debt during an expansion are virtually identical. However, Figure 2 does not tell us how the overall public debt level at the start of the recession affects the ability of the government to respond to the demands a financial crisis imposes.

Do countries with high debt-to-GDP ratios face more pressure from bond markets, thereby limiting their ability to use fiscal policy to smooth out recessions from financial crises and hasten recovery? Answering this question requires statistical analysis beyond the simple averages shown in Figure 2 (see Jordà, Schularick, and Taylor 2013b for technical details). Countries may have high levels of debt for reasons that also affect how they respond to financial crises. Those reasons can mask the true effect of high public debt on output growth. For example, a tax break for interest paid on a mortgage for a second home would increase public debt by reducing tax revenue and increase private debt by encouraging consumers to borrow. Therefore, a recession is made worse because the private sector is accumulating too much debt rather than because of the buildup of public debt per se. One way around this confounding effect is to control for a rich set of macroeconomic characteristics to isolate the influence of the public debt level on the shape of the recovery from a financial crisis. Our sample excludes the recent global financial crisis and our conclusions are not driven by that episode, but data from that crisis can be used to crosscheck our findings.

Figure 3
GDP in recessions according to public debt levels 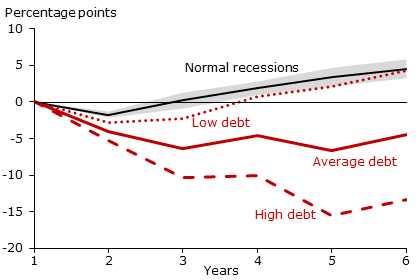 Figure 3 shows that when the credit boom is unwound, high levels of public debt can be problematic. Output remains severely depressed for many years and remains far off its peak levels even five years after a downturn begins. For example, Greece’s dramatic recession is consistent with this scenario. By contrast, low levels of debt make a recession less painful and a recovery much faster. In fact, the pattern is not much different from that seen in a normal recession not triggered by a financial crisis. Most countries had debt levels near the middle of the three scenarios. Their recession paths closely resemble that depicted in the figure.

Unlike normal recessions, those triggered by financial crises put considerably more strain on public finances. The government is often required to act as a backstop, assuming the losses of the banking system. If public debt is high at the start of the crisis, the government may be unable to fulfill its lender-of-last-resort function, thereby slowing the recovery.