The Slowdown in Existing Home Sales

Sales of existing homes slowed noticeably over the second half of 2013, reflecting a more drawn-out recovery than expected for housing markets. A main reason for the slowdown is higher mortgage rates that have made financing more costly nationwide. Sales appear to be slowing even more in distressed markets, where real estate investors had bought up single-family homes to convert into rental properties following the housing bust. Evidence suggests that investors may be retreating from these markets as housing valuations rise.

Although the housing market appeared to be on the road to recovery in recent years, sales of existing homes slowed markedly over the second half of 2013. This Economic Letter takes a closer look at some of the possible reasons for this decline. Evidence shows that existing home sales are not that far out of line with predictions based on economic fundamentals. The primary explanation for the slowdown is an increase in mortgage interest rates, which has made financing more difficult for homebuyers.

In some markets, the slower sales have likely been accentuated by a retreat of investors buying single-family homes to convert into rental properties. Recent research shows that, although investors had invested heavily in distressed markets in past years, they may be pulling back as house values have increased in comparison with rental prices. 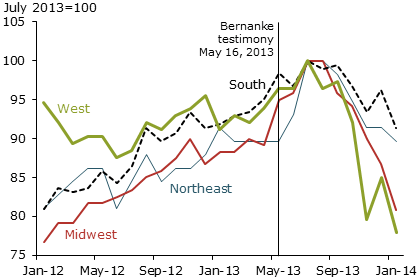 Many indicators of housing market activity stalled over the second half of 2013, but the weakness is most evident in existing home sales. Sales of existing single-family homes reached a recent peak of 4.75 million units in July 2013, compared with the year before and adjusted for seasonal trends. Sales have fallen ever since. Figure 1 shows that the pattern of declining home sales has been broadly similar across different regions of the country. Sales in these regions all reached their peaks in July 2013 and then fell about 10% through October; the figure shows the regions indexed to 100 in July for comparison.

The fact that home sales in different parts of the country peaked and fell together suggests that some common underlying factors were at play. One such factor that could account for the decline in home sales is rising mortgage interest rates. Starting in May 2013, financial market participants became increasingly convinced that the Federal Reserve would soon taper its long-term asset purchases, and interest rates moved up. Mortgage rates in particular rose by nearly a full percentage point. Higher mortgage rates generally have a direct dampening effect on home sales, as buyers face constraints on the size of loans they can secure and on loan payments relative to their incomes. Since individual incomes likely did not rise over this short period, and house prices continued to grow in most regions, the rise in mortgage rates was expected to have an unambiguous negative impact on sales.

To gauge the effects of higher mortgage rates on home sales over time, I use a simple statistical model that relates existing home sales to past sales, past mortgage rates, and house price appreciation. I include past values of single-family construction permits to control for conditions in the market for new homes—a substitute for existing homes. 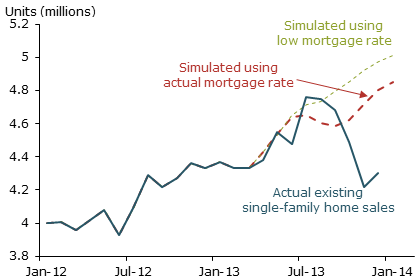 Figure 2 shows both actual data and dynamic simulations of existing home sales during the period of interest. The model simulations use seasonally adjusted monthly data through March 2013. Beyond that date, I use actual mortgage rates, house price appreciation, and building permits to predict sales of existing homes. This simulation is dynamic in the sense that the model predictions are based on past values of home sales, which themselves are predictions from early periods in the simulation. In the figure, the solid blue line shows the actual path of existing single-family home sales, and the dashed red line is the simulated path from the model. The dashed green line offers another simulation of what sales would have been if mortgage rates had remained at the low levels observed in April 2013.

Figure 2 shows that the model follows the actual data fairly well through May 2013, when mortgage rates began to climb. At this point, the model predicts that sales should have leveled off and then declined for a short time. In fact, actual sales jumped just as mortgage rates went up. This could reflect buyers rushing to complete transactions before mortgage rates increased more, or other shocks to the system that the model doesn’t account for. The statistical model captures about one-half of the decline in home sales from July to October 2013.

After October 2013, actual home sales continued to fall through the winter months, probably due in part to unusually severe winter conditions in many parts of the country. Note that the model anticipated that home sales would recover by this time. The factor behind this predicted sales growth is the strong appreciation of house prices that still persists. While higher house prices might be considered a deterrent to homebuyers, they actually can be a positive sign in the housing market. House price appreciation may boost confidence about future economic conditions for both buyers and sellers. In the data, the correlation between sales volumes and the level of house prices is significant and positive (see, for example, Krainer 2001).

The role of investors in distressed housing markets

The simulation I described is based on aggregate data and is intended to capture the historical movement of existing home sales in line with other economic conditions over a long period of time. Digging deeper and looking at specific market groups, we can invariably find times when relationships between these key variables change or other factors become important. One factor that may have become an important influence in the current market is the role played by real estate investors.

Typically, existing home sales are dominated by buyers who intend to live in the homes they purchase. In the wake of the foreclosure crisis, however, a surplus of housing became available for sale at heavily discounted prices. Opportunistic investors bought up many formerly owner-occupied units at this time and converted them into rental properties. These investors are generally less sensitive to mortgage rates or house prices than traditional buyers, which could have implications for future home sales.

How big a role real estate investors have played is still up for debate, but there is more consensus about which markets investors are most active in. Research by Molloy and Zarutskie (2013) identified and ranked investor activity in 2012 for 20 large metropolitan areas. They found a strong negative relation between investor presence and the ratio of house prices to rents; that is, markets where investors bought more houses coincided with areas where house prices were relatively lower compared with rental prices. Not only were investors attracted to markets that had high foreclosure rates and thus plenty of inventory for sale, they also were drawn to areas with relatively low home valuations that might be expected to rise.

To study how investors might have impacted sales in the housing market, I compare cities that Molloy and Zarutskie ranked in the top five by level of investor activity in 2012—specifically Atlanta, Las Vegas, Phoenix, Tampa Bay, and Charlotte—and low investor markets ranked in the bottom five—Seattle, San Francisco, Portland, Boston, and New York. Given these definitions, it is straightforward to assess the role of investors by tracking the differences in sales and other housing market variables in these different market groupings. 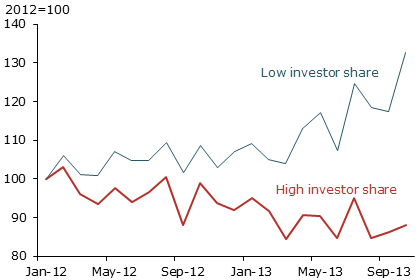 Figure 3 shows total monthly sales from Zillow for the top five and bottom five cities. I index the total sales levels to 100 in January 2012 to ease comparison across the two market types. The figure shows that much of the increase in nationwide sales throughout the first part of 2013 was actually absent in the high investor cities. Drilling down to the city level, Las Vegas and Phoenix show the most prominent change among the high investor markets; sales grew briskly there from 2008 to late 2011, possibly reflecting investors entering the market, but have declined steadily ever since. By contrast, current sales growth for markets with a low investor share actually appears to be stronger than for the nation as a whole. These markets also did not experience as pronounced a decline as high investor markets did in the wake of the mortgage interest rate hike in the summer of 2013. 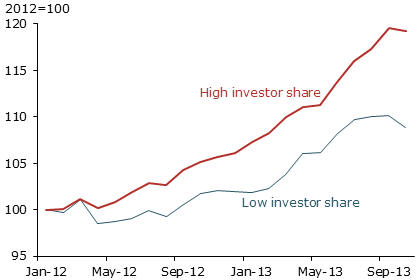 Molloy and Zarutskie found that investors entered markets where house price-rent ratios were relatively low. Figure 4 shows that price-rent ratios grew more rapidly in these same markets where investors were most active. It is difficult to know whether the investor activity directly caused the price-rent ratios to go up in these markets, or whether prices in these markets have now fully recovered to the point that they are in line with rental prices and other fundamentals. Regardless, Figure 4 suggests that the expected profitability of a buy-and-rent strategy in these markets has likely declined over time. So it is quite plausible that investors have retreated from these formerly low-priced housing markets. It should also be noted that, with interest rates rising in the bond market over this period, yields on other financial assets may have become relatively more attractive compared with housing.

The analysis in this Economic Letter suggests that changes in fundamentals such as rising mortgage rates can account for much of the sluggishness in existing home sales over the past year. This drop-off in sales seems more pronounced in some markets where investors had previously been active, though these markets have been slowing for the past several years, even before mortgage rates began to rise. Further increases in future mortgage rates could dampen the recovery in existing home sales. It should be noted, however, that many other indicators of housing market activity—including housing starts and new home construction—remain significantly below what history would lead us to expect for this stage of the recovery. Thus, some other factors may be holding back home sales. For example, prospective homebuyers may have impaired access to credit, they may be underwater on their mortgages or have low home equity, or they may simply be reluctant to make large spending decisions when economic prospects are still somewhat uncertain. As the moderate recovery continues and these factors begin to dissipate, all forms of housing market activity, including existing home sales, should post more solid growth.