Prices of special financial instruments called inflation derivatives can provide valuable insight into investors’ views of future inflation. Projections from inflation swap rates suggest inflation will remain low for some time and return only slowly to levels consistent with the Federal Reserve’s notion of price stability. Inflation caps and floors give evidence that investors seem less uncertain about inflation forecasts than in recent years, and that they perceive a favorable inflation outcome as increasingly likely.

Price stability, defined as a low and stable rate of inflation, is one of the main goals of monetary policy. In January 2012, the Federal Reserve clarified its interpretation of price stability by introducing an explicit longer-run inflation target: an inflation rate of 2%, as measured by the annual rate of change in the price index for personal consumption expenditures (PCE). Recently, however, inflation has run significantly below the Fed’s target, and the Federal Open Market Committee (FOMC) has stated that “it is monitoring inflation developments carefully for evidence that inflation will move back toward its objective over the medium term” (Board of Governors 2014). It has made clear that the inflation outlook is one of the key factors in determining future monetary policy actions, including the pace of asset purchases and the path for the federal funds rate.

In this Economic Letter, we consider what we can learn about the outlook for inflation from financial market prices. While expectations of future inflation are priced into most financial assets, we focus on financial instruments with payoffs tied exclusively to inflation. The prices of these so-called inflation derivatives solely reflect financial market participants’ assessment of the inflation outlook. Therefore, they offer a relatively clear picture of where the market sees inflation going in the near future.

Prices of inflation derivatives contain information both about the projected path for future inflation and about the uncertainty around that projection. We first examine the inflation projection implicit in current market prices to see how it relates to the path predicted by professional forecasters. In doing so, we focus on the question of when inflation is expected to return to levels consistent with the FOMC’s target. Then, we assess the risks to this inflation outlook. We take advantage of the fact that prices of inflation derivatives contain important information about the entire range of possible future inflation outcomes. This allows us to measure the uncertainty underlying market-based inflation forecasts, including the risk that inflation will rise too high or fall too low, and show how this risk has evolved in recent years.

The current outlook for inflation

We first focus on the projected path for future inflation. To infer market-based inflation projections, we use prices of inflation swaps. In an inflation swap contract, two parties agree that one will pay the realized inflation rate, measured as the change in the consumer price index (CPI) over the term of the contract. The other party will pay a fixed, predetermined rate known as the swap rate, which is set at the beginning of the agreement to give an expected value of zero. The swap rate therefore reflects the expectation of future inflation over the length of the contract with an adjustment for risk that we will discuss later. 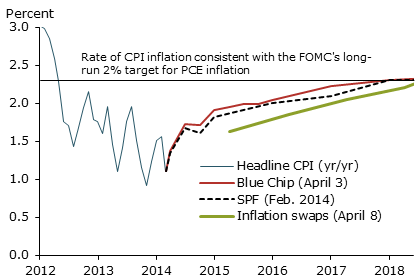 Figure 1 shows the projection of future CPI inflation based on inflation swap rates, as of April 8, 2014. We also include inflation forecasts from the Survey of Professional Forecasters (SPF) and the Blue Chip Economic Indicators survey. The market-based projection (green line) is lower than survey-based forecasts and implies inflation will remain low through 2017.

What do these projections tell us about when inflation might return to the FOMC’s target? To answer this, recall that the FOMC’s target relates to PCE inflation, which has recently averaged about 0.3 percentage points below CPI inflation. Based on this simple rule, a CPI inflation rate of 2.3% would be consistent with the FOMC’s inflation target. Relative to this benchmark, both market-based and survey-based projections in Figure 1 suggest inflation will remain below target until late 2017 or early 2018. Thus, financial market participants appear to be in line with survey respondents in forecasting that inflation will return only very gradually to the Fed’s target.

The distribution of future inflation

To better understand the current inflation outlook, we also consider the uncertainties around these forecasts. For example, we may ask, relative to the market’s projection for inflation in Figure 1, what is the risk that inflation will be higher or lower than the FOMC’s target at a certain future point in time? We can learn about this risk from market prices of other financial instruments that are essentially bets on the value of future inflation.

Using the prices of caps and floors with the same maturity, but different inflation thresholds, we can infer the market’s assessment of the entire distribution of future inflation rates for that contract horizon. These distributions are known as “risk-neutral probability densities,” which we construct using a method similar to Kitsul and Wright (2013). An important advantage of using this approach is that it is model-free, in that it simply summarizes information from actual market prices. This avoids any criticism regarding restrictive assumptions that are necessary for statistical or economic models. 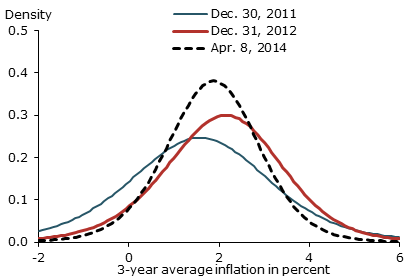 Figure 2 displays the distribution of average inflation over a three-year horizon on three dates: the end of 2011, the end of 2012, and more recently on April 8, 2014, represented by so-called probability densities. The area under the density curve over a given interval equals the probability of average future inflation being within that range. A peaked density curve generally indicates a small degree of uncertainty about the outcome, whereas a relatively flat curve reflects a higher degree of uncertainty.

The first thing to note is that the dispersion of these option-based distributions—that is, the uncertainty about future inflation—is quite high. Even extreme results, such as average inflation below 0% or above 4%, do not appear impossible. This may appear unusual, but is a typical result from the options market, which we will discuss in more detail below. More importantly, the dispersion has decreased noticeably over time. This is evident because the more recent distribution curves have become more peaked. This suggests that uncertainty about future inflation has decreased.

Figure 3
Uncertainty of inflation from options and the SPF 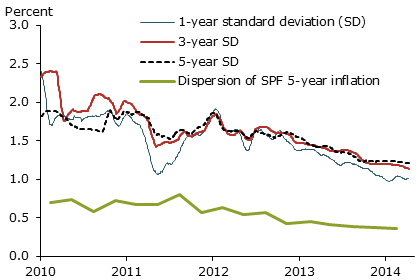 To investigate this point further, we analyze how inflation uncertainty has evolved over time. Since data on inflation caps and floors are only available starting in late 2009, we begin our sample in January 2010. Figure 3 shows how wide the range of probable average inflation is, measured by the statistical standard deviation for average inflation over one, three, and five years. We smooth the data to give a clearer picture over time and avoid the daily volatility of market prices.

These measures of uncertainty have clearly trended downward over the period we study. The magnitude of the decline is quite significant; for outlooks one year ahead, the standard deviation has fallen from around 2% to nearly 1% most recently. The figure also displays the dispersion of five-year inflation forecasts in the SPF. This alternative measure of inflation uncertainty has also decreased markedly over the same period. Overall, this evidence suggests that the uncertainty about future inflation has fallen in recent years. Both market participants and professional forecasters appear less uncertain about the inflation outlook.

Table 1 reports the probabilities implied by the options market for these three alternatives for horizons of one and three years, for the same dates as in Figure 2. As an example, prices of inflation derivatives on April 8, 2014, implied a 37% probability that average CPI inflation over the next three years would remain below 1.5%. The numbers in Table 1 indicate that market participants now generally view low inflation as less likely than they did in the recent past, suggesting that the risk of low inflation has decreased. At the same time, the risk of high inflation appears to have decreased as well. Consequently, the probability of the normal inflation scenario has increased quite significantly. Market participants apparently view a favorable, normal inflation outcome as increasingly likely.

In interpreting our results, it is important to understand that risk-neutral probabilities derived from option prices, are not the same as real-world probabilities. Risk-neutral probabilities put more weight on outcomes that investors are worried about and want to hedge against. Because of the serious repercussions of extreme events, such as deflation or very high inflation, they are likely to be assigned higher probability than would normally be plausible. This explains in part why these distributions are often more dispersed than we would expect given historical experience. However, this does not mean that risk-neutral probabilities are not useful for policy analysis. Just like investors, policymakers are worried about adverse outcomes. Hence, an argument can be made that they should use the same kind of risk-neutral distributions to make forecasts and inform policy decisions (Kocherlakota 2013).

Our analysis of the information in inflation derivatives provides several interesting insights about financial market participants’ outlook for inflation. First, market-based projections generally agree with professional forecasters that it will take quite some time for inflation to return to levels consistent with the FOMC’s target. Thus, the economy is likely to face low inflation for some years to come. Second, and more encouragingly, the risks to the inflation outlook appear to have decreased markedly. The uncertainty in option-based distributions of future inflation has declined, and this is consistent with less dispersion in inflation expectations among professional forecasters. The risk of future inflation either rising above or falling below a narrow range around the FOMC target appears to have decreased. Market participants seem to view a favorable inflation outcome as increasingly likely: The odds of inflation outcomes consistent with the FOMC’s notion of price stability are more favorable than they have been for the past several years.

Jens H. E. Christensen is a senior economist in the Economic Research Department of the Federal Reserve Bank of San Francisco.