The Risks to the Inflation Outlook

Although inflation is currently low, some commentators fear that continued highly accommodative monetary policy may lead to a surge in inflation. However, projections that account for the different policy tools used by the Federal Reserve suggest that inflation will remain low in the near future. Moreover, the relative odds of low inflation outweigh those of high inflation, which is the opposite of historical projections. An important factor continuing to hold down inflation is the persistent effects of the financial crisis.

The Federal Reserve responded to the recent financial crisis and the Great Recession by aggressively cutting the target for its benchmark short-term interest rate, known as the federal funds rate, to near zero. The Fed also began providing information about the probable future path of the short-term interest rate. Known as forward guidance, this policy is fintended to lead to lower long-term yields and therefore stimulate economic activity. Additionally, the Fed has purchased long-term Treasury securities and mortgage-backed securities, leading to a balance sheet that is substantially larger than before the financial crisis. Taylor (2014), among others, argues that these policies are likely to lead to substantially higher inflation. Nevertheless, the inflation rate remains below 2%, the target set by the Federal Open Market Committee (FOMC).

This Economic Letter describes results from a model that explicitly accounts for the different dimensions of monetary policy to quantify the risks to the inflation forecast. This analysis suggests that inflation is expected to remain low through the end of 2016, and the uncertainty around the forecast is tilted to the downside, that is, the risk of lower inflation. In particular, the probability of low inflation by the end of 2016 is twice as high as the probability of high inflation—the opposite of historical projections. The analysis also suggests that the risk of high inflation collapsed in 2008 and has remained well below normal since. Importantly, according to the model, there is little evidence that monetary policy constitutes a major source of inflation risk.

Most empirical macroeconomic models account for monetary policy’s effects only through the interest rate channel. This ignores other tools used by the Federal Reserve that can affect the forecast for inflation. Instead, in this study I use the model in Chen, Cúrdia, and Ferrero (2012), which allows for the effects of both interest rate changes and asset purchases. I also add the effects of monetary policy announcements about the future path of the interest rate, called forward guidance. One advantage of this setup is its ability to generate forecasts that account for the fact that the federal funds rate cannot fall below zero.

With these features, the model explicitly accounts for all policy tools the Fed has used recently. This is important because it allows a proper interpretation of the risks to the forecast. For example, Cúrdia and Ferrero (2013) show that in this model asset purchases have little effect on inflation. However, they also find substantial uncertainty surrounding those effects, leaning toward projections of higher inflation. This means that asset purchases may have little role in determining the median inflation forecast projection but in principle they can increase the upside risks to inflation. My results using the same model fitted to data since the financial crisis show no evidence that asset purchases have increased the risk of high inflation. 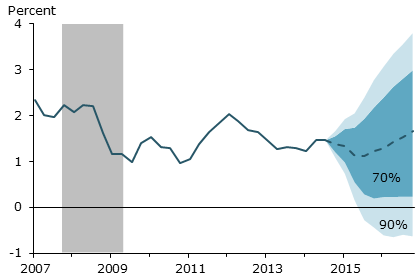 I use data through the third quarter of 2014 to generate forecasts of four-quarter core personal consumption expenditures price inflation, referred to here as inflation, through the fourth quarter of 2016. Figure 1 shows the recent evolution of inflation and these forecasts. The dashed blue line is the median forecast in annualized percentage points. The blue shaded areas represent the 70% and 90% probability ranges of possible forecasts. The vertical grey shaded area shows the quarters for the Great Recession according to the National Bureau of Economic Research (NBER).

Figure 1 shows that the median inflation forecast is not expected to return to the FOMC target of 2% until after the end of 2016. The uptick in inflation in the first half of 2014 could lead one to believe inflation is finally on the path back toward its target. However, inflation has shown similar patterns several times before and each time the uptick has never lasted very long. According to this model, we should not see inflation begin to recover more firmly until around the end of 2015.

The model explains that persistent effects from the financial crisis are the main reason inflation is expected to remain low for so long. The financial crisis disrupted the credit market, leading to underinvestment and underutilization of resources in the economy. This slowed the economic recovery and pushed inflation down more than 2 percentage points, according to the model.

In contrast, the model suggests monetary policy pushed inflation up by 0.8 percentage point. This is expected to fall to zero by the end of 2016. Comparatively speaking, monetary policy appears to be far from causing excessive inflation under present circumstances.

Risks to the inflation outlook

Figure 1 also shows that the 90% uncertainty around the forecast for the last quarter of 2016 range from less than –0.5 to over 3.8 percentage points. Another way to look at the uncertainty about the forecast is to consider the likelihood that inflation will be within 1 percentage point above or below the 2% FOMC target. This accounts for 54% of the range of probable inflation outcomes by the end of 2016 and about 50% in the long run, according to the model. Considered against the historical experience, this suggests that the level of uncertainty surrounding the forecast is not unusually large.

The model assigns whether inflation will be high or low depending on the uncertainty around whether headwinds induced by the financial crisis are expected to persist. If these headwinds last longer than expected, then inflation is more likely to remain low due to continuing underutilization of resources. If instead those headwinds turn out to be easing faster than expected, then inflation will revert back to normal more quickly and possibly overshoot its intended target.

The explanation for this surprising result is that the estimates for the policy rule imply that monetary policy has a strong stabilizing role. This means that departures from systematic monetary policy are expected to be temporary, and if they led to increased inflation or real activity they would trigger higher interest rates in the future, mitigating the effects of discretionary policy.

Evolution of the risks over time 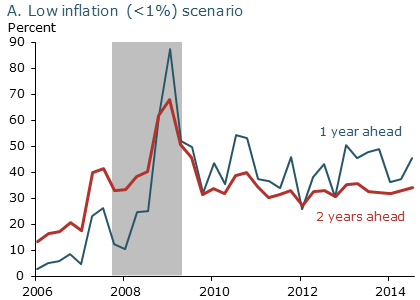 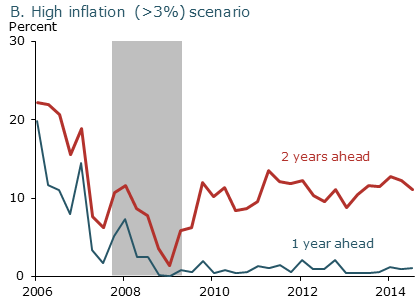 The fact that the one-year-ahead probability of high inflation has remained low for so long also suggests that, since the recession, the model projects a quicker return to more normal inflation levels than what is consistent with incoming data. This could mean that the risks to the inflation outlook may remain tilted to the downside longer than what this model currently projects.

Overall, Figure 2 shows that the odds of inflation being outside the 1–3% range have remained relatively stable in the past three years, especially when predicting two years out. This contrasts with Bauer and Christensen (2014), who found that those odds have fallen since 2011, using data from financial contracts.

Overall, this Letter suggests that inflation is not expected to surge in the near future. According to this model, the risks to the inflation outlook remain tilted to the downside. The financial crisis disrupted the credit market, leading to lower investment and underutilization of resources in the economy, causing slower growth, which in turn put downward pressure on inflation. My analysis suggests that these effects from the crisis explain a substantial part of the outlook for inflation. Monetary policy has played a stabilizing role in the recent past, preventing inflation from falling further below its 2% target. Moreover, the analysis suggests that monetary policy is not contributing to the risk of inflation being above the median projection in the near future.

The risk of high inflation in the next one to two years remains very low by historical standards. The analysis suggests that the factors keeping inflation low are expected to be transitory. However, differences between projected and realized inflation in the recent past suggest that those factors may in reality be more persistent than implied by the model.

Vasco Cúrdia is a senior economist in the Economic Research Department of the Federal Reserve Bank of San Francisco.