The housing sector has been one of the weakest links in the economic recovery, and the latest data continue to show only modest improvement. One obstacle to a pickup in housing demand has been tight mortgage credit standards. Indeed, loan standards for borrowers with lower credit scores have shown few signs of easing. Still, as the share of new mortgages financed in the private market has started to rise, access to credit may improve.

Speaking about the broader economy in 2012, then-Federal Reserve Chairman Ben Bernanke referred to a number of unusual conditions that were impeding a return to normal growth. Two of these so-called headwinds were related to the sluggish housing recovery. The first was a debt overhang problem. Debt levels grew during the 2001–06 housing boom. But when growth prospects for house prices and income diminished during the recession, the debt remained, which may have weighed on consumer demand for all sorts of goods and services, including housing.

The second housing-related headwind was the tightening of credit availability from lenders. The housing boom in the early 2000s has often been attributed to an easing of the credit supply for all borrowers (see Mian and Sufi 2014). Relative to conditions during the boom, tighter constraints for borrowers after the recession could simply be part of a normalization in household credit markets. But they could also reflect a change in outlook among lenders. House price volatility and a heightened awareness of the risk of borrower default during the recession may have made banks less willing to extend credit, causing a shift in the credit supply curve.

In this Economic Letter we assume that the debt overhang and tighter access to credit have acted as a constraint on the housing market. We then consider whether credit conditions appear to be easing now that house price appreciation has reduced the debt overhang. We find that while banks appear more willing to lend, as indicated by an increase in the bank share of overall mortgage lending, credit conditions do not seem to be easing for borrowers with lower credit scores.

Annual house price appreciation in the United States has been climbing at a rate greater than 6% since early 2012. This benefits household balance sheets by improving homeowners’ equity positions in relation to their housing investment. As a result, the number of borrowers who are underwater, meaning they owe more than the value of their home, has fallen by more than half since the end of the recession. While no longer being underwater should ease borrowers’ risk of default, being just above the water level does not imply that those borrowers now have enough equity to move or trade up in the housing market. It also does not imply that they will automatically qualify for refinancing or be able to take out a home equity loan.

Mortgage borrowers who have an estimated loan-to-value ratio less than 80% are considered higher equity borrowers. According to data from Black Knight Data & Analytics, the share of loans in this category increased from 42% in May 2012 to 59% in March 2014. If house price appreciation were to continue at half that annual pace through May 2015, the share of borrowers below the threshold would increase to 63%. This return to a healthy level of home equity will allow more homeowners to borrow in the mortgage market.

Rising house prices chip away at the debt overhang on homeowner balance sheets. Thus, the incentives for borrowers to borrow and lenders to lend should be improving. On the lender side of the equation, we can get a sense of how credit standards have shifted over time from the Federal Reserve’s Senior Loan Officer Opinion Survey. The surveys suggest that lenders tightened standards on virtually all types of loans during the recession. This could be because earlier losses forced banks to focus on rebuilding capital buffers and reducing risk. Alternatively, lending terms may simply have been normalizing from unusually lenient standards during the housing boom. The surveys also indicate that much of this recession-era tightening dissipated fairly quickly for prime borrowers with high credit scores and low debt-to-income ratios seeking to purchase homes. Lending standards for subprime and nontraditional mortgages, however, have not eased to the same extent and had actually tightened again until recently.

Considering the basic message from the loan officer survey, one way to gauge whether credit access is changing is to look at the characteristics of actual loan flows. In Figure 1 we break down the flow of new mortgages according to their funding sources. The bottom blue-shaded section represents the percentage of privately funded loans with no government guarantee, including those from banks and private-label securitizations, that is, pools of mortgage loans that are not owned or guaranteed by government-sponsored enterprises like Fannie Mae or Freddie Mac. This group of mortgages currently makes up just under 20% of total loans. Although this is low by historical standards, the share has been growing since early 2013. Most of this increase stems not from a revival in the private-label mortgage-backed security market, but rather from an increased share of new jumbo loans that banks have retained on their balance sheets. Jumbo mortgage borrowers typically have strong credit histories, so this development is consistent with the survey result that suggests credit access has improved for prime borrowers.

A particularly important point is that bank-funded jumbo or nonconforming loans do not have any substitute readily available elsewhere in the mortgage market. To the extent that this type of lending is making up an increasing share of new mortgage lending, there appears to be some evidence that constraints on credit access are easing somewhat at this end of the market. In addition to an increasing share, the interest rate spread for jumbo mortgages began to narrow towards the end of 2013. The drop in rates coinciding with the increase in the jumbo share suggests that the supply curve of the banks has shifted in favor of holding these loans. 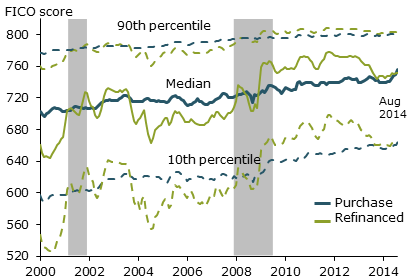 Finally, credit scores on new mortgages provide another interesting insight. Figure 2 shows different percentiles of the FICO credit score distribution for new first-lien mortgages. The solid lines depict the FICO scores associated with loans for home purchases, while the dashed lines depict those associated with mortgage refinancings, commonly called refis. The tightening of credit access during the most recent recession (gray bar) is illustrated most clearly for borrowers with low credit scores. During the housing boom, the bottom 10% of the credit score distribution had FICO scores around 620, which was an informal rule-of-thumb cutoff to define subprime loans. Afterward, the low-score end of the market tightened considerably, and now borrowers in the bottom 10% have credit scores around 660.

One interesting pattern in Figure 2 is the divergence between the distribution of credit scores associated with refis and home purchases. While the refi data are typically more volatile than the purchase data, it is particularly notable how median and lower scores on refis have declined over the past year over all points of the distribution. During much of this period, mortgage interest rates fell and refis were brisk. However, the decline in scores reflects some easing in the mortgage market that also appears well-timed with the increase in house prices. The refi series is also affected by the many programs designed to streamline the refi process, so house price appreciation is not the only factor driving this series. Nevertheless, this part of the mortgage market appears to show some signs of easing.

Importantly, what we do not see in Figure 2 is any significant decline in the credit scores of borrowers who are buying houses. This type of mortgage borrowing is important for economic growth. Our finding is also consistent with weakness in related parts of the housing market. For example, while new home construction has picked up somewhat since 2011, it still remains at very low levels. Existing home sales tailed off through most of 2013, and homeownership rates continue to decline. 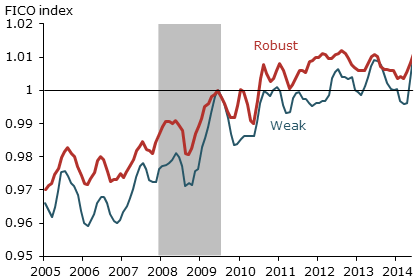 Even though we see no signs of improved credit access in the aggregate home purchase data in Figure 2, it is possible that this development is simply in its early stages. It may be easier to detect signs of improvement by comparing across markets. Figure 3 shows the movement of median credit scores on loans for home purchase in two sets of counties, one with robust and one with weak local economies. We remove jumbo mortgages to control for the recent uptick in their shares. Because jumbo mortgage borrowers traditionally have above-average income and wealth, which may also imply high credit scores, including them might raise the median credit scores in a market. This could lead to a mistaken conclusion that credit access is declining. For comparison, we index the FICO score data to 1 in June 2009, the official end of the recession. Robust markets are defined as counties in both the top 25% of the distribution of recent house price appreciation and the bottom 25% of the unemployment rate distribution in the first quarter of 2014; weak markets are in the bottom 25% for house price appreciation and top 25% for unemployment.

If local economic conditions were the main deciding factor for lenders to ease credit terms, then we should expect to see the paths of median FICO scores in robust and weak local economies diverge, with scores falling or rising more slowly in markets where economic conditions have improved the most. We do not see this pattern in Figure 3. It appears that median credit scores evolved along quite similar paths in markets with very different local economic conditions. We are tempted to conclude that this reflects a lack of credit access across both types of economies or a continuing headwind. This conclusion would be consistent with the basic results from the senior loan officer survey, which suggested banks were not easing mortgage lending terms to nonprime borrowers. One point of caution, however, is that this conclusion implicitly assumes that demand for mortgage credit is higher in robust counties compared with the weaker counties, so the similar median scores would reflect credit supply. This seems like a reasonable assumption—most estimates of housing demand depend on variables like house price appreciation and local unemployment rates, which also form the basis for our selection of robust and weak counties. However, lower-score borrowers in both markets might not be seeking home loans, reducing their demand for credit. It is difficult to disentangle these competing explanations about credit demand and credit supply. However, there is little evidence that borrowers with lower credit scores are returning to the mortgage market, even though the general economic recovery has been under way for nearly five years.

In this Economic Letter we have described how constrained access to credit has been a lingering obstacle to the housing recovery. The signs of progress remain uneven. On one hand, banks appear more willing to hold a larger share of jumbo mortgages on their balance sheets than they were following the housing bust. However, we find little evidence that credit access has improved much for borrowers with lower credit scores. This uneven access to credit appears even in markets where economic conditions are relatively favorable to increased housing activity.

Erin McCarthy is a research associate in the Economic Research Department of the Federal Reserve Bank of San Francisco.