An ongoing concern has been that the public might misconstrue the Fed’s forward guidance about future monetary policy and underappreciate the extent to which short-term interest rates may vary with future news about the economy. Evidence based on surveys, market expectations, and model estimates show that the public seems to expect a more accommodative policy than Federal Open Market Committee participants. The public also may be less uncertain about these forecasts than policymakers.

Recently, subdued levels of volatility in financial markets have received some attention. For example, Federal Reserve Chair Janet Yellen (2014) noted that “indicators of expected volatility in some asset markets have fallen to low levels, suggesting that some investors may underappreciate the potential for losses and volatility going forward.” Prices of financial assets, such as stocks and bonds, are sensitive to unexpected changes in interest rates because their present values are determined by discounting future cash flows. Thus, the low volatility in asset markets could, in part, reflect market participants’ relative certainty about the future course of interest rates.

In this Letter, we assess the private sector’s views about future monetary policy in terms of both expected levels of the short-term interest rate and the uncertainty or disagreement in those expectations. Through its “forward guidance,” the Federal Reserve’s policymaking body, the Federal Open Market Committee (FOMC), provides an indication to the public about the stance of monetary policy expected to prevail in the future. Furthermore, since 2012, the FOMC participants’ projections of the appropriate target for the federal funds rate over the next several years and in the longer run have been included as part of their quarterly economic projections, which are released to the public. Research has shown that this communication of interest rate projections can better align the public’s and the central bank’s expectations, which could lead to improved macroeconomic performance (see, for example, Rudebusch and Williams 2008). However, an important concern is that the public might not give enough weight to how dependent the central bank’s guidance is on both current and incoming data. Thus, the public could underestimate the conditionality and uncertainty of interest rate projections.

We assess the public’s expectations about future monetary policy from three sources: (1) surveys of economic forecasters and primary dealers, (2) market prices of federal funds and Eurodollar futures, and (3) estimates from a financial-econometric model. We then compare these public expectations with the expectations reported in the June FOMC participants’ federal funds rate projections (Board of Governors 2014). Our analysis shows that, on balance, the public seems to expect more accommodative policy than FOMC participants. One measure of uncertainty also shows the range of the public’s forecasts is somewhat smaller than that among FOMC participants, suggesting the public also may be less uncertain about their projections.

We look at two surveys of private-sector professionals about their monetary policy outlook. One is the monthly Blue Chip Financial Forecast, based on a survey of about 50 professional economic forecasters on key financial variables, including the federal funds rate, up to five quarters in the future. For our analysis, we use the August 2014 Blue Chip forecast based on polling from July 23–24. The other is the Survey of Primary Dealers regularly collected by the Federal Reserve Bank of New York before each scheduled FOMC meeting. In the most recent survey dated July 21, 2014, 22 primary dealers—brokers or financial institutions that are able to purchase Treasury securities directly from the Fed—submitted forecasts of the target federal funds rate for the fourth quarter of 2014 through the first half of 2018, as well as their expected long-run value. 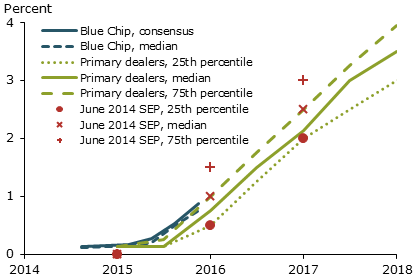 While survey evidence is a direct and straightforward way to learn about the public’s expectations about future monetary policy, it is the collective opinion of a rather small set of market professionals. Another way to gauge market expectations is to examine the market clearing price of federal funds futures. Since the payoffs in these contracts are based on the realization of the federal funds rate in the future, investors are placing bets on the actual outcome of the federal funds rate. At a particular point in time, the price that clears the market aggregates the views of market participants about future monetary policy. Using market prices to gauge expectations is particularly meaningful because investors are putting money on the line in support of their projections. In addition, their views can be observed at high frequency whenever the futures market is open. 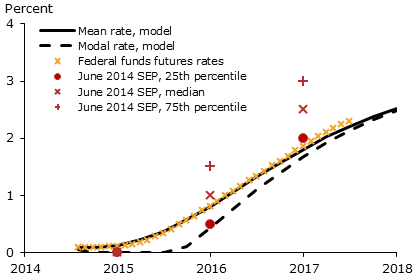 Because the federal funds rate is currently close to zero, the modal forecast of the future federal funds rate is below the mean forecast. Thus, the modal market expectation of future monetary policy would be even lower than the market’s mean expectation and, more importantly, closer to the low end of the SEP projection, which itself is a modal forecast by each FOMC participant.

As pointed out earlier, while the mean market expectation can be observed, the modal expectation must be estimated. One way to do this is by using estimates based on a model; in our case we use the shadow-rate term-structure model of Christensen and Rudebusch (2013) that assumes interest rates have a lower bound of zero.

The Christensen and Rudebusch model is calibrated daily to a sample of 16 overnight indexed swap (OIS) rates with maturities ranging from one month to 10 years. An important reason for using OIS rates is that they reflect risk-adjusted expectations of the overnight federal funds rate, which is the object of our forecast.

In Figure 2, the solid black line shows the estimated mean rate path and the dashed black line shows the estimated modal path of the future federal funds rate using the Christensen and Rudebusch method. The model-based mean rate path coincides with the market-based estimates. After accounting for the asymmetric distribution of the future federal funds rate, the estimated modal path from the model shows lower estimates than the mean, lying below the 25th percentile of the June SEP projection both at the end of 2015 and at the end of 2016.

In this Letter, we use evidence from surveys, the futures market, and model estimates to assess whether the expectations of future federal funds rates by professional forecasters and financial market participants are aligned with FOMC expectations as reported in the most recent Summary of Economic Projections. On balance, our evidence indicates that the public seems to expect more accommodative monetary policy than the SEP suggests. The public also appears to be less uncertain about the future course of monetary policy than FOMC participants.

Jens H.E. Christensen is a senior economist in the Economic Research Department of the Federal Reserve Bank of San Francisco.

Simon Kwan is vice president of financial research in the Economic Research Department of the Federal Reserve Bank of San Francisco.

Board of Governors of the Federal Reserve System. 2014. “Summary of Economic Projections.”