How Much Do Medicare Cuts Reduce Inflation?

Because the health sector makes up a large share of the U.S. economy, widespread price changes for medical services can impact overall inflation significantly. Cuts to public health-care spending spill over directly and indirectly to private spending. A recent estimate suggests the full effect of the Medicare payment cuts from the 2011 Budget Control Act resulted in a decline of 0.24 percentage point in the overall personal consumption expenditures price index. This is over twice the expected drop if private-sector spillovers are not included.

The Budget Control Act of 2011 triggered extensive, across-the-board reductions in federal spending from 2013 to 2021. Included in these sequestrations was a one-time 2% reduction to Medicare payments beginning on April 1, 2013. Because Medicare accounts for approximately 20% of all health-care spending (Center for Medicare and Medicaid Services 2012), its payments have a large effect on total expenditures. In addition, Medicare’s substantial size and status as a public payer position it to significantly influence the payments of other payers, specifically private health insurers (Clemens and Gottlieb 2013).

In this Economic Letter, we assess the impact of the Medicare payment cuts on prices for health-care services, as well as overall price inflation. Importantly, we use results from recent research to account for spillovers from Medicare into private payment systems. Because medical spending makes up over one-fifth of personal consumption expenditures (PCE), health-sector prices have sizable direct effects on the PCE price index (PCEPI), which is the measure of inflation explicitly targeted by the Federal Reserve’s policymaking board, the Federal Open Market Committee or FOMC.

The sequestration’s 2% reduction in Medicare payments applies to all services financed by Medicare after April 1, 2013. This includes Medicare payments to hospitals (known as Part A), to physicians, laboratories, and other health-care providers (Part B), to Medicare Advantage plans, and to prescription drug plans (Part D). The cuts to Parts A and B affect payments made directly to health-care providers, while cuts to Medicare Advantage and Part D involve payments to the administrating plans. In total, the Congressional Budget Office has estimated that 90% of Medicare spending would be affected by the sequester (CBO 2011).

To understand how the sequestration cuts flow into inflation measures, we first explore the behavior of price indexes in general. We focus on the medical-care producer price index (PPI), as opposed to the medical-care consumer price index (CPI). The PPI captures full payments to providers from consumers and insurers, and so reflects the total cost of services better than the CPI. Further, because the Bureau of Labor Statistics differentiates between PPIs financed by Medicare and by the private sector, this provides an opportunity to validate the claim that Medicare influences private prices. Finally, the medical-care PPI is a direct input into the PCEPI. 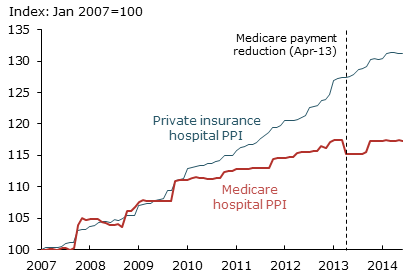 Figure 1 plots PPI series beginning in January 2007 for Medicare payments to hospitals (red line) and for other hospital payments, primarily from private insurers (blue line). The figure shows that the Medicare PPI experienced a stark drop in April 2013 due to the sequestration cuts.

The graph shows many dates when both the Medicare and private-payments PPIs exhibit large changes. These jumps happen mainly because provider payment contracts are set annually or less frequently. Furthermore, changes often occur across many contracts simultaneously. Note that jumps in the Medicare PPI take place mainly in October, when Medicare contracts are reset as the fiscal year changes. Jumps in the private-insurance PPI occur more sporadically, but mainly in January, July, and October.

To characterize these changes systematically, we defined a jump as an instance when the index grew by more than 1% between consecutive months. Since 1993, when the series was created, 39% of these jumps occurred in January, 26% in July, and 26% in October. Thus, besides the end of the fiscal year, a majority of private contracts are reset at the beginning and middle of the calendar year. Empire BlueCross BlueShield of New York, for example, directly informed providers that its payments would fall in July 2013 to reflect reductions made in the sequester (Empire BlueCross BlueShield 2013). 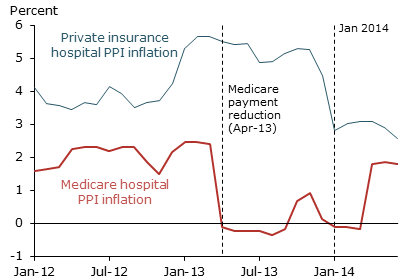 Figure 2 shows year-over-year changes in both PPI series from Figure 1. Each point in Figure 2 thus measures changes in service prices over the previous year. Consistent with Figure 1, we see that Medicare price inflation dropped sharply in April 2013—2.5 percentage points between March and April 2013. Over the subsequent year, private-sector price inflation declined during the months associated with substantial numbers of contract renegotiations. Specifically, private PPI inflation fell 0.6 percentage point in July 2013 and 1.6 percentage points in January 2014. These facts suggest that Medicare’s payment cuts systematically passed through into the private payment system.

Link between Medicare and private payments

Recent evidence from both hospitals and physician offices suggests there is a substantial positive link between Medicare costs and private payments for health-care services. Consider the following scenario: Medicare beneficiaries and privately insured patients both desire access to quality health-care resources. That access depends in part on the generosity of an insurer’s payments. This places Medicare and private insurers in competition to procure providers’ services for their beneficiaries. When Medicare reduces its payments, physicians and hospitals lose bargaining power in their negotiations with private insurers. Consequently, reductions in Medicare’s payments tend to result in reductions in private insurers’ payments to health-care providers.

A study of this relationship in the hospital setting by White (2013) estimates that a 10% reduction in Medicare’s hospital payments results in a 4 to 8% reduction in private payments. White and Wu (2013) further find that hospitals handle these cuts by reducing their operating costs; this and related findings are summarized in Frakt (2013).

While the evidence clearly implies that Medicare and private payments move together, it is important to think carefully about the time horizons over which such effects unfold. White and Wu (2013) and White (2013) study relatively long-run changes in hospital costs and operations. Similarly, Clemens and Gottlieb’s cross-regional estimates appear to unfold over several years; specifically, they find that half of the total pass-through into the private sector—for example, 0.35 of the 0.7% noted above—occurs in the two years after the Medicare payment change, while the remainder occurs after three or more years. It is thus crucial to consider the time horizons associated with contract renegotiations and operational investment decisions.

Impact of Medicare reduction on medical-care and overall inflation

To account for how the impact from Medicare cuts unfolds over time, we construct estimates of the sequester’s effects over three horizons. First we consider its direct effects, which exclude any private-sector response. We then estimate the effects including short-run private spillovers over one to two years, and medium- to long-run spillovers over three or more years.

This immediate reduction in the price level neglects potential spillovers from Medicare to prices paid by private insurers, which account for over half of relevant health spending. Recall that a 1% decline in Medicare’s payments results in a short-run decline in private payments of 0.35% and long-run decline of 0.7%. Thus, it is also important to account for the timing of the spillovers from Medicare payments into private-sector payments

Comparing columns 1 and 3 shows the importance of incorporating private-sector spillovers when determining the overall impact of a Medicare price change. If we were to focus only on the direct consequences, and predict a decline of 0.09 percentage point in the price level, we would understate the full effect by more than half. Note that these changes are cumulative reductions in the level of the PCEPI.

Medicare accounts for one-fifth of all health-care spending. Because Medicare’s reimbursements influence the rates paid by private insurers, Medicare both directly and indirectly affects aggregate health-care inflation and overall PCEPI inflation. Our analysis shows that these effects can be quite large. Because private payments move in the same direction as public payments, the total effect of Medicare spending cuts from the Budget Control Act of 2011 on the PCEPI exceeds that from the reductions in Medicare’s payments alone. Thus, ignoring private-sector spillovers would lead to a substantial understatement of Medicare’s impact on inflation.

Jeffrey Clemens is an assistant professor of economics at University of California, San Diego.

Joshua D. Gottlieb is an assistant professor of economics at University of British Columbia.

Adam Hale Shapiro is a senior economist in the Economic Research Department of the Federal Reserve Bank of San Francisco.