The 2006 health-care reform in Massachusetts relied heavily on the private insurance market. Recent evidence shows that the reform boosted payments to physicians from private insurers by 13% relative to other areas. This increase began immediately before the reform became law, suggesting that insurers raised payments in anticipation of the change. The reform may have also caused the state’s insurance premiums to fall. Overall, evidence suggests that the Massachusetts health-care reform shifted dollars away from insurers and towards providers and consumers.

Massachusetts made national headlines when it implemented comprehensive health-care reform in April 2006. The goals of the reform were to increase the number of insured people and introduce an online marketplace where insurers compete. The major features of the legislation mandated that individuals have insurance coverage, required employers to insure employees, subsidized insurance for low-income people, and introduced an online health insurance exchange.

Unlike previous health-care reforms such as Medicare, the Massachusetts law relies heavily on the private health-care system. Specifically, the health insurance expansion focused on using financial incentives to boost enrollment in private insurance. Consequently, the reform could have affected prices in the commercial health-care market, such as payment rates to providers and insurance premiums to consumers. For instance, research by Graves and Gruber (2012) shows that the Massachusetts reform may have caused individual insurance premiums to decline.

This Economic Letter summarizes recent research (Dunn and Shapiro 2015) assessing how the 2006 Massachusetts reform affected prices of services paid to physicians in the commercial market for both employer-sponsored and individual insurance. The study finds that prices for physician services rose 13% in Massachusetts relative to other areas. Strikingly, provider payments began rising immediately before the law was enacted, indicating that insurers and health-care providers raised prices in anticipation of the reform. Overall, the evidence suggests that health-care reform probably shifted dollars away from insurers and towards providers and consumers. These findings may be useful in looking at the effects of the recent federal reform.

The Massachusetts legislation is based on a “three-legged stool” model of health-care reform (Gruber 2011). The first leg consists of changes to the nongroup private health insurance market, such as limiting price discrimination against individuals with pre-existing conditions, guaranteeing issuance and renewal of insurance, and prohibiting medical underwriting. The law also created an online insurance exchange to increase the transparency of health insurance plans.

The second leg of the stool aims to keep the insurance market from unraveling due to elements of the first leg. For instance, with guaranteed issuance, healthier people may find it in their best interest to wait to buy insurance until they ultimately need health care. For this reason, the reform included an individual insurance mandate, which required those over age 18 to purchase insurance or pay a penalty. These penalties went into effect immediately after the reform was enacted.

The third leg aims to make sure that people with lower incomes are able to purchase insurance. This took the form of government subsidies to health insurance plans sold on the online exchange. Unsubsidized plans can also be sold on the exchange as long as they meet certain standards for quality and value.

Similar to efforts for national reform, planning in Massachusetts began well before the law was actually implemented. When Mitt Romney entered the governor’s office in 2003, his staff began consulting policy experts and academics to identify ways to cover the uninsured. Romney fully advertised his ideas concerning health-care reform to the public in an editorial in The Boston Globe in November 2004. The following year in November 2005, the Massachusetts House and Senate each passed separate health insurance reform bills. Seven months later in April 2006, the resulting law was finally passed. The Massachusetts reform ended up having a substantial effect on insurance coverage, leading to a 4.5 percentage point drop in the number of people without insurance (Division of Health Care Finance and Policy 2011).

In the commercial market, physicians and hospitals negotiate with insurers to determine how much they will be paid for patient services. Both sides have incentives to agree on payment rates before the insurer begins marketing plans to consumers. Providers who agree to contract with the insurer are placed in-network, which draws in more patients who pay a lower out-of-pocket cost. Insurers are more likely to attract customers if their network contains a broad array of high-quality providers. Each side may attempt to gain bargaining leverage by threatening to not contract with the other party. For instance, a physician group may refuse to contract with an insurer that offers relatively low payments to join its network.

There are at least two ways health-care reform could affect provider payment rates. The first way is related to the impact of reform on the demand for health insurance. For instance, the Massachusetts reform increased the number of insured individuals by more than 400,000. To absorb such an increase in demand, an insurer may have to offer higher payment rates to draw more providers into its network.

The second way reform could change rates is related to competition between insurers. The Massachusetts reform brought in new entrants from the Medicaid market and made it easier for consumers to compare plans through the online marketplace. For instance, the marketplace allows people to search for plans that include a specific physician. Competition may therefore encourage insurers to raise rates paid to physicians to ensure that they remain in-network. Dunn and Shapiro (2014) and Dafny et al. (2012) have documented that more competition between insurers raises provider payment rates.

Payment contracts are negotiated fairly infrequently. Large health systems and insurers typically negotiate payment contracts every three years, sometimes up to every five years. Contracts between insurers and smaller physician groups usually renew automatically with clauses that allow either side to terminate the agreement. Clemens, Gottlieb, and Shapiro (2014) show that these contract prices generally change in January and July of each year. Since service prices are essentially stuck at the negotiated rate throughout the contract period, both parties are likely to consider future demand and cost when setting rates. Given that the reform passed both the House and Senate in late 2005, the payment contracts were probably decided earlier in preparation for the change.

Effects of the Massachusetts reform on physician payments

Dunn and Shapiro (2015) assess the effects of reform on physician payments by studying variation in payment growth within Massachusetts across counties. The study relies on the prices of specific medical procedures, as identified by the Current Procedure Terminology (CPT) codes, using detailed data on individual procedures from the MarketScan database.

To isolate the causal impact of reform on payments, the authors exploit the fact that providers and insurers should expect the largest effects in those counties with the most to gain from the reform. As Figure 1 shows, this held true in Massachusetts. Those counties with the lowest percentage of insurance coverage before the reform was implemented had the largest change in insurance during the reform period. The nine counties in the figure account for 97% of the state’s medical-care spending. This type of pre-reform variation in insurance coverage has been used by other researchers to assess the impact of policy reforms (see, for example, Finkelstein 2007). 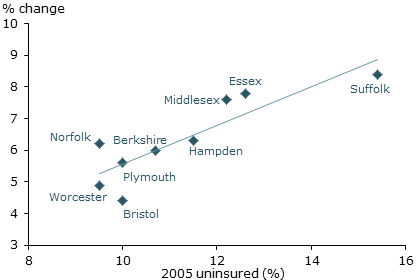 Dunn and Shapiro (2015) used the cross-county pattern in Figure 1 as the basis for a statistical method known as a regression analysis to estimate how medical costs varied across counties and over time in Massachusetts. Figure 2 shows the implied impact of the reform on physician payments, marked by diamonds for each period, along with 95% confidence bands. For example, the first diamond indicates that the reform had no statistically significant impact on physician payments in the second quarter of 2002. To track how these estimates align with the sequence of events leading up to the reform, we show two major events as vertical lines. The green line indicates the period when health reform passed the Massachusetts House and Senate in the fourth quarter of 2005. The red line indicates the period when the reform was finally enacted in the second quarter of 2006. 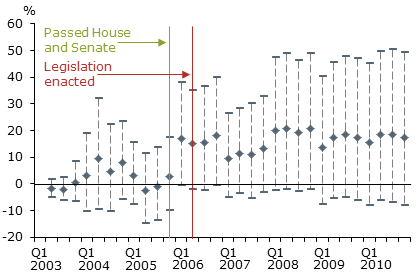 The pattern of the estimates shows a clear shift in the first quarter of 2006. This rise in payments occurs immediately after the reform bill passed the House and Senate separately but before the Massachusetts reform was enacted. This pattern is consistent with prices being negotiated to a higher rate in anticipation of the reform eventually being enacted. The total implied impact of the reform on physician payments in the commercial insurance sector is 13.4%, with a minimum possible effect of about 11%.

The findings in this study are consistent with health insurance reform increasing payments to providers. It remains unclear whether this was primarily due to the overall increase in demand for insured health care or greater competition among insurers. However, data from the Massachusetts Division of Health Care Finance and Policy suggest that the reform’s effect on insurer competition may have played a large role. Insurance premiums grew less rapidly than medical-care expenditures, while the portion of those premiums paid back to providers—known as the medical loss ratio—increased. Furthermore, earlier research (Graves and Gruber 2012) suggests that the Massachusetts reform may have caused insurance premiums to fall, implying that rising provider payments may not have been passed on to consumers. Overall, these studies imply that health-care reform shifts dollars from insurers not only to providers in the form of higher payments but also to consumers in the form of lower premiums.

The Massachusetts health-care reform served as a model for the national health-care reform, known as the Affordable Care Act (ACA). It therefore functions as a useful way to study the potential effects of this larger reform. In this regard, the experience in Massachusetts, with the bulk of payment changes occurring before implementation, suggests that a large portion of the price effects due to the ACA are likely to have already taken place. However, the Massachusetts experience and the national reform differ in many respects, so a direct comparison should be treated with some caution. For example, the penalties for people who did not purchase coverage to meet the ACA’s individual mandate went into effect almost four years after the law was enacted, whereas in Massachusetts the penalties went into effect immediately after enactment. Conducting a similar study at the national level could shed some light on the direct effects of the ACA on medical-care prices.

Adam Hale Shapiro is a senior economist in the Economic Research Department of the Federal Reserve Bank of San Francisco.