Financial market prices contain valuable information about investors’ views regarding future interest rates, inflation, and other economic variables. However, such market-based expectations can be hard to interpret because changes in risk and liquidity premiums also affect asset prices. In practice, policymakers should be cautious in relying on the expectations information in market prices.

People’s expectations for future income, interest rates, and inflation are important determinants of financial and economic outcomes. But these expectations are not observable. Surveys of the public or economic forecasters can provide some guidance, but they are published only monthly at best. Statistical estimates based on historical data are also useful but are subject to considerable model uncertainty.

Fluctuations in risk and liquidity premiums and in other market forces complicate how market-based expectations are interpreted and used by policymakers—including central bankers. For example, over the second half of 2014, BEI rates fell dramatically. Does this reflect a drop in the public’s expectations of future inflation or does it reflect other market forces? This Economic Letter describes what policymakers can and cannot learn from financial market prices about expectations of future economic outcomes and how best to interpret and use that information.

When interpreting market prices, it’s useful to distinguish between two types of expectations for future events, which we call “real-world” and “market-based” expectations.

Real-world expectations are based on the standard “true” probabilities of everyday interpretation, for example, the probability that it will rain tomorrow. These probabilities are associated with the underlying process that actually generates the observed data. However, they are generally not known and must be inferred by using a statistical model, by individual introspection, or by surveying households or professional forecasters. In any case, such estimates often include a substantial amount of uncertainty.

Market-based expectations are easily measured from asset prices and are available without the need to rely on statistical models, surveys, or the judgment of forecasters. Therefore, they are sometimes used in place of real-world expectations—especially at short forecast horizons. For example, market-based expectations of future short-term interest rates can be observed from interest rates on government bonds or money market futures (Bauer and Rudebusch 2013, Bauer 2014). Market-based expectations of inflation and probabilities for different inflation scenarios in the near future can be obtained from prices on inflation swaps (Bauer and Christensen 2014). Similarly, to assess the future fiscal implications of central bank policies, Hilscher, Ravis, and Reis (2014) use market-based probabilities of future inflation outcomes, while Christensen, Lopez, and Rudebusch (2013) use model-based real-world probabilities.

In theory, choosing an optimal policy under uncertainty involves two steps: (1) assigning probabilities to uncertain future outcomes depending on the choice of the current setting of policy, and (2) ranking the relative desirability of different policy choices by evaluating their expected benefits and losses. Normally, a policymaker would use real-world probabilities to calculate the expected net benefits of a variety of possible policy actions, and then choose the policy action that maximizes that net benefit. Using market-based probabilities instead is generally viewed as potentially misleading because they combine investors’ views about real-world probabilities with investors’ views and preferences regarding risk. While each of these components is of interest, the standard approach to policy treats them differently.

Although there is a theoretical argument for using market-based expectations in setting policy, in practice, a variety of factors can distort the information in financial market prices and thus make market-based expectations misleading for policymakers. For one, participation in financial markets is limited: Many people do not invest in stocks and bond markets, let alone derivatives markets. Since many households are effectively shut out from these key asset markets, the investors who determine asset prices and market-based probabilities may not be representative of all U.S. households. Accordingly, market prices may not reflect the views and preferences of the average U.S. household, and policies that respond strictly to market-based probabilities may reflect the views of only a small set of people. Another issue related to participation is that asset prices are often driven by the behavior of foreign investors, including, for example, sovereign wealth funds or foreign central banks. These investors affect market prices but are outside the mandate of U.S. policymakers.

Another complication of basing policy only on market-based probabilities is that markets are not complete, meaning that existing financial contracts do not cover all possible contingencies. For example, there are no futures markets, and thus no market-based expectations, for the unemployment rate. For a monetary policymaker with a dual mandate for both price stability and maximum employment—like the Federal Reserve—monetary policy cannot rely only on market-based expectations, since none exist for a key macroeconomic variable.

In addition, the liquidity of certain securities—that is, the ability to easily buy and sell them—also affects market prices. Indeed, market-based expectations often appear distorted by substantial liquidity premiums that fluctuate over time. For example, the liquidity premium incorporated in the price of nominal Treasury securities rises during times of crisis when investors are searching for a safe haven.

Finally, there is a widespread view that some movements in asset prices represent shifts in market sentiment rather than in fundamentals. Indeed, asset prices appear to be more volatile than can be explained by economic determinants such as dividend payouts, profit projections, or default risk. Large flows out of equities and into bonds during “risk-off” phases—when flight-to-safety demand pushes up the prices of safer assets—seem to alternate with flows in the opposite direction during “risk-on” phases when investors’ appetite for risk improves. These changes in market sentiment, which can be viewed as exaggerated or even potentially irrational, are a key source of volatility in financial markets that policymakers may wish to avoid reacting to.

As an example of making policy with market-based expectations, consider U.S. monetary policymakers, who closely follow inflation expectations obtained from financial markets (Christensen, Lopez, and Rudebusch 2010). Figure 1 shows the past four years of BEI rates, calculated as the difference between nominal Treasury yields and Treasury inflation-protected securities (TIPS) yields, measuring inflation over the next five years and the subsequent five years. These BEI rates are the most commonly used measures of market-based inflation expectations. 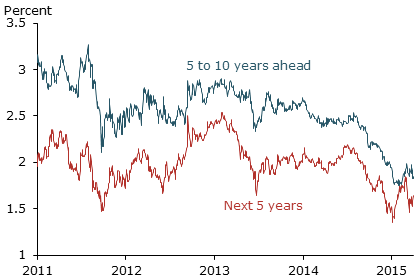 Since the middle of 2014, market-based inflation expectations for 5 to 10 years ahead have plummeted from 2.5% to 1.8%. At face value, these changes would indicate a drop in long-term inflation expectations, which would be worrisome given the Fed’s explicit longer-run inflation objective of 2%. Indeed, a strict market-based approach to making policy would argue that the Fed should take immediate action toward more accommodative policy to push the BEI rate back to the inflation target.

But can the recent decline in BEI rates be taken at face value? Note that a similar decline occurred in the fall of 2011 when 5- to 10-year-ahead BEI rates suddenly dropped over a percentage point despite increases in actual inflation and steady long-run inflation expectations from surveys. A key factor then was the European sovereign debt crisis, which triggered massive flight-to-safety purchases of nominal Treasury bonds but not the less liquid TIPS. These inflows pushed down nominal yields much more than inflation-adjusted yields, hence BEI rates dropped. This is a striking example of substantial changes in market-based expectations that were largely driven by market forces that the Fed would likely want to avoid reacting to.

More recently, as expectations of an impending quantitative easing program by the European Central Bank steadily increased over the second half of 2014, European sovereign bond yields declined and capital outflows from Europe to the United States surged. Hence, international financial developments were probably an important factor in driving down U.S. BEI rates over the past year as well. Again, a strict, mechanical reliance on these changes in BEI rates to set U.S. monetary policy would seem unwise.

Financial market prices can be a valuable source of information for policymakers, including central bankers. However, it is important to recognize the limitations of market-based expectations. Market prices may vary for a number of reasons that are unrelated to the fundamental factors of interest to policymakers. Therefore, it appears that policy cannot be formulated exclusively using information in market-based expectations.