Policymakers disagree over whether central banks should use interest rates to curb leverage and asset price booms. Higher interest rates make mortgages more expensive and could prevent borrowers from bidding up house prices to create a boom. However, rough calculations show that the size of rate increase needed to do so might also boost unemployment and push down inflation. Thus, using this type of policy tool may cause the central bank to deviate significantly from its goals of full employment and price stability.

Wild swings in asset prices over the past 20 years and the associated boom-bust cycles have sparked considerable debate about how monetary policy might play a stabilizing role (see, for example, Rudebusch 2005). Some policymakers, such as then-governor of the Federal Reserve Ben Bernanke (2002), argued that interest rate policy should focus exclusively on achieving the Fed’s dual mandate of stable prices and maximum employment. That is, threats to the stability of the financial system should be dealt with separately through financial regulation and supervision. More recently in the aftermath of the Great Recession, another former governor, Jeremy Stein (2014), argued for using interest rate policy to reduce financial market vulnerability and as a complement to regulation and supervision. Such an approach entails a tradeoff: Raising interest rates to curb financial risk could mean deviating from the dual mandate, therefore entertaining higher unemployment and lower inflation. A recent paper by Ajello et al. (2015) is among the first to explore this tradeoff quantitatively.

This Economic Letter investigates the link between interest rates, mortgage lending, and house prices. Quantifying this link is important in assessing whether or not interest rate policy can be used to guard against leveraged asset price booms in practice. Housing plays perhaps the most important role among asset classes because purchases are typically leveraged through mortgages. Many consider the 2002–06 housing bubble an important trigger of the subsequent financial crisis. However, economists disagree about the role that low interest rates played in fueling the house price boom. Our goal in this Letter is different. We instead ask how much interest rates would have had to rise to keep housing prices under control. Our rough figures suggest interest rates would have needed to rise around 8 percentage points to completely avoid the boom-bust cycle. However, such a boost also could have caused significant damage to the Fed’s main objectives of full employment and price stability.

An experiment based on international data

How successfully interest rates can curb an asset price boom depends on how responsive housing demand is to interest rates. The bigger the interest rate increase must be to slow down rising house prices, the more this policy will cost in terms of higher unemployment and lower inflation. However, directly measuring this responsiveness in the data is very difficult.

Data on interest rates, mortgage lending, and house prices reflect the interaction of demand and supply rather than just one or the other. This interaction complicates empirical analysis and illustrates the well-worn dictum that correlation is not causation. However, there have been historical events that caused interest rates to fluctuate away from levels dictated by a central bank’s mandate. These events are like experiments that can be used to properly identify the responsiveness, or elasticity, of demand we seek.

Fleming (1962) and Mundell (1963) first described an interesting paradox in international finance: If a country fixes its exchange rate with another country, known as “pegging,” and allows capital to flow freely across its borders, then it cannot also control interest rates. This is because investors would immediately take advantage of any interest rate differentials between countries since the peg removes exchange rate risk. This observation is sometimes called the trilemma of international finance, since a country cannot have free movement of capital, a fixed exchange rate, and an independent monetary policy at the same time (see, for example, Obstfeld, Shambaugh, and Taylor 2005).

We use this trilemma to focus on eras when a country pegged its exchange rate. From those years, we identify periods when interest rates fluctuated independently of those conditions—such as unemployment and inflation—that the central bank would otherwise use to determine its consistency with mandated goals. Since the ties to these confounding factors are effectively severed, we are left with a cleansed measure of the interest rate demand elasticity.

Mortgage lending and house prices are sensitive to interest rates

In recent research (Jordà, Schularick, and Taylor 2015) we quantify the responsiveness of mortgage lending and house prices to interest rates using statistical methods that exploit the trilemma of international finance. We use data reaching back to 1870 in some cases, and covering 16 advanced economies or around 90% of the industrialized world. Throughout the history of modern finance, countries have moved in and out of exchange rate pegs. Examples include gold standard eras, traditional exchange rate mechanisms such as Bretton Woods between 1945 and 1971, and, more recently in Europe, the euro. However, the United States stands out. It is a dominant economy that other countries tend to peg their exchange rates to. As a result, the United States has seldom handed over the reins of monetary policy, with the exception of the 1879 to 1913 gold standard period. For this reason, identifying the elasticity of mortgage lending and house prices to interest rates primarily reflects an average value calculated across countries other than the United States. Our results are valid to the extent that the shared experience of the industrialized world also applies to the United States.

The basic results from our research are summarized in Figures 1 to 3. Figure 1 traces the typical cumulative path of the short-term interest rate—our stand-in for the policy rate—after we apply a 1 percentage point increase unrelated to the central bank’s mandate. Following this experiment, we first trace the cumulative response of long-term rates for a five-year government riskless security, also displayed in Figure 1. Our results are consistent with findings in the literature: Long-term rates do not respond one-to-one to fluctuations in short-term rates because short-term rates typically revert to the average more quickly. Thus, only about half of the short-term fluctuations pass through to the long-term rate, as the figure shows. 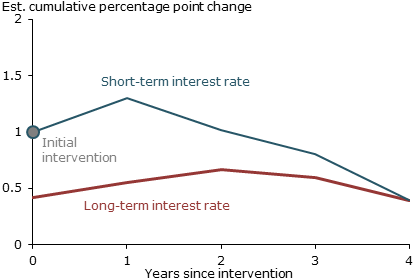 Figure 2
Response of the ratio of mortgage lending to GDP 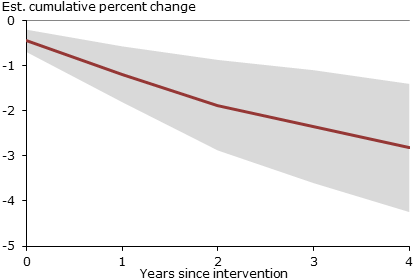 Figure 3
Response of the ratio of house prices to GDP 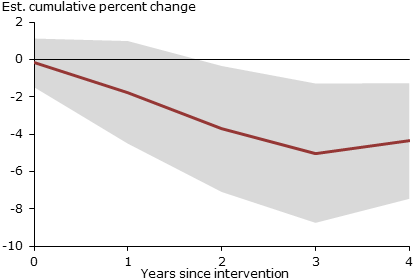 The increase in the long-term rate serves as a proxy for the increase in mortgage rates, for which we do not have data. Therefore, in Figure 2 we trace the cumulative response of mortgage lending after the initial 1 percentage point increase in the short-term rate from Figure 1. The initial impact is quite muted. However, over time mortgage lending shrinks, and in four years it declines about 2.8 percentage points since the start, measured as a ratio to GDP to adjust for the size of the economy. Not surprisingly, house prices suffer a similar fate. Figure 3 displays the ratio of the percentage change in house prices to income per capita. House prices fall slowly at first, but by the fourth year the accumulated decline is about 4.4%.

We can now calculate how much interest rates would have had to increase relative to the historical record to keep housing prices in check. Figure 4 displays the historical U.S. post-World War II ratio of house prices to income, stated in log terms so that changes can be read approximately as percentage changes. That ratio had declined steadily until 2002. Using a linear approximation from 1950 to 2002, we extrapolate the trend rate through 2006. We then calculate the percent difference between actual observed house prices and this trend, which turns out to be about 40%. A similar number would result from comparing house prices to the consumer price index, so this difference is not particular to our choice of normalization. The United Kingdom suffered a similar 40% house price boom. Since a 1 percentage point increase in the short rate translates into about a 4.4% decline in house prices, keeping house prices on trend would have required about an 8 percentage point increase in the federal funds rate in 2002 according to our calculations. 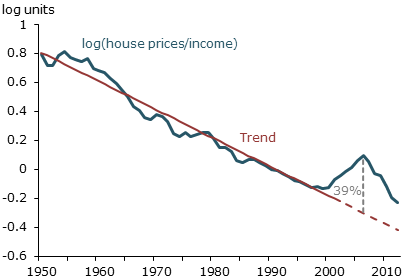 What actually happened? The federal funds rate, the Fed’s short-term policy rate, stayed between 1% and 1.25% from the end of 2002 until the middle of 2004. Starting in June 2004, the federal funds rate rose 4.25 percentage points, reaching 5.25% by June 2006. In our experiment, the rate would have been about 8 percentage points higher at the end of 2002, but would have ended at about the same level observed in June 2006. That is, preemptive interest rate policy would have been extraordinarily tight in 2002 then would have gradually abated to around the level eventually reached in June 2006. By our calculations, such a large increase in interest rates would have depressed output more than the Great Recession did, roughly speaking.

Several complex factors caused the Great Recession. This Letter focuses on a particular mechanism. Our experiment based on the trilemma of international finance indicates that using interest rate policy to bring down housing prices would have required a severe tightening in 2002. There are several caveats to this result. First, the initial federal funds rate increase indicated by our analysis could have been smaller. For instance, preventing a financial crisis might not have required bringing house prices all the way back to trend. Second, households might have eventually revised their expectations about the Fed’s new resolve against asset price booms, thus requiring a smaller initial intervention. Third, even a fraction of our projected 8 percentage point increase would have been sufficient to sink the economy into recession, which would have also slowed house prices more rapidly than we calculated, albeit at a cost of added unemployment. Finally, one has to factor in the inevitable uncertainty that surrounds any empirical analysis.

What is the takeaway then? Slowing down a boom in house prices is likely to require a considerable increase in interest rates, probably by an amount that would be widely at odds with the dual mandate of full employment and price stability. Moreover, the Fed would need a crystal ball to foretell house price booms. In restraining asset prices, while the power of interest rate policy is uncontestable, its wisdom is debatable.