Central banks debate whether using monetary policy to foster financial stability through house prices is advisable. Although a rise in interest rates tends to lower house prices, it may come at a significant cost through reduced economic output and inflation. This implies a very costly tradeoff when macroeconomic and financial stability goals are in conflict. The following is adapted from a presentation by the president and CEO of the Federal Reserve Bank of San Francisco to the Bank Indonesia–BIS Conference in Jakarta on August 20.

The great unresolved question in central banking today is: Should monetary policy be used to foster financial stability, even at the expense of achieving other macroeconomic goals such as inflation and employment? Rivers of ink have already been spilled on this question and no doubt much more will be in coming years. In my talk today, however, I will take a step back from the “big picture” policy questions, such as the pros and cons of “lean” vs. “clean” and the appropriate roles of fiscal, regulatory, and monetary policies in addressing risks to financial stability. Instead, I will put on my researcher’s hat and focus narrowly on one particular issue that is central to thinking about the role of monetary policy in supporting financial stability—the effects of monetary policy on house prices and the overall economy.

Why focus on house prices? Although monetary policy’s influence on house prices represents only one channel by which it affects financial stability, it is an important one for a number of reasons. First, the global financial crisis provides an all-too-real example of the devastating effects of a debt-fueled housing boom and crash. And real estate finance has grown enormously in many countries (see Jordà, Taylor, and Schularick 2014 and Mian and Sufi 2014) and is therefore likely to remain a key source of risk to financial stability. Second, standard economic theory tells us that monetary policy should affect house prices and housing finance more generally (Kuttner 2012). All else equal, higher interest rates increase the cost of owning a house, which implies a lower asset value. Hence, there is a prima facie case for considering a role for monetary policy in tempering housing booms in support of financial stability. Third, there is a wealth of data and research on this issue that provides a rich opportunity for analysis and testing of various hypotheses. Of course, this last argument exposes me to the criticism that I am foolishly looking under a lamppost because the light is better there, but so be it.

The question remains: How does one best estimate the effects of monetary policy on house prices and other economic variables of interest? Economists typically take one of two approaches. The first is to use economic theory to describe the relationship between variables, say interest rates and house prices. The model can then be used to evaluate the “counterfactual” experiment of a rise in interest rates and compute the simulated effect on house prices or other variables (Dokko et al. 2009, Svensson 2014, and Ungerer 2015). The main strength of this model-based approach is that it gives a clear theoretically grounded answer to the question. The potential shortcoming is that the answer is only as good as the model is at providing a reasonably accurate description of the relationships that occur in the real world. Specifically, standard textbook theories may provide an inadequate description of the determination of house prices (Kuttner 2012). This suggests looking to a more evidence-based approach.

The second approach focuses more squarely on the empirical evidence and relies less directly on economic theory. In a nutshell, the empirical approach looks at what has typically happened to other variables when interest rates go up (or down). The strengths and weaknesses of this approach are the mirror image of those of the model-based approach. The main strength is that one does not rely so much on having an accurate model. The weakness is that it’s hard to distinguish between statistical correlation and economic causation. Interest rates go up and down in response to economic conditions and also tend to be highly correlated with other variables. However, to answer the question about the effects of a policy decision to change interest rates, it is crucial for one to properly identify times when policy changes are not a response to economic developments, but rather the driver of them.

Recent research in Jordà, Schularick, and Taylor (2015a, b) provides an ingenious way to identify monetary policy actions that are arguably exogenous to domestic economic conditions. It examines the effects of changes in interest rates in countries that have given up their ability to freely adjust interest rates on their own because they fixed their exchange rate to a foreign currency. In such circumstances, changes in domestic interest rates are tied to developments in a foreign country, such as the United States, and not to domestic conditions. Thus, one can simply look at the responses of domestic economic variables to changes in interest rates to trace out the effects of monetary policy.

Applying this method to a sample of 17 countries over the past 140 years indicates that monetary policy has significant and persistent effects on real house prices and output. Figure 1 shows the responses of short-term interest rates, real house prices, real GDP per capita, and the inflation rate following a shock to monetary policy. These results are based on a slightly modified version of recent research by Jordà, Schularick, and Taylor (2015a). The sample covers 1870–2013 (except for the interwar period of 1914–45 and the oil crisis years of 1973–80). The estimated responses have been scaled so that the initial rise in short-term interest rates is 1 percentage point. The shaded regions show the 90% confidence regions of the estimated effects. 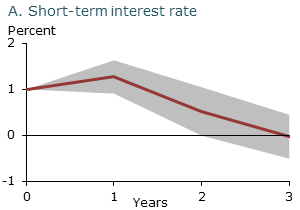 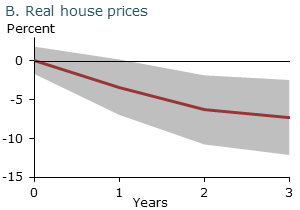 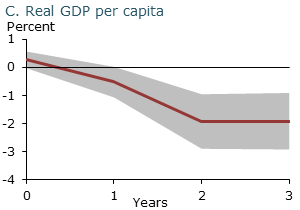 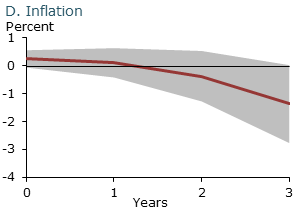 Two years after a 1 percentage point increase in the short-term interest rate, real house prices are estimated to decline by over 6%, while real GDP per capita declines by nearly 2%. This implies a ratio of 3.3 in terms of the decline in house prices for a 1% decline in the level of output after two years. Looking at a longer time horizon of three or four years (not shown in the figure), the ratio rises to about 3½.

Although imprecisely estimated, inflation also responds negatively to a monetary policy shock after a two-year lag. One caveat in interpreting this result is that by construction the sample only includes countries with fixed exchange rates. Many countries today have adopted inflation targeting or similar regimes with explicit mandates for low inflation, which likely alters the inflation responses to monetary policy shocks relative to a fixed exchange rate regime.

These findings are based on the average response of house prices and other variables to changes in monetary policy. But, do they depend on specific circumstances? In particular, is monetary policy more or less powerful during housing or real estate debt booms that are frequently precursors to financial crises? To assess this possibility, I examined estimated responses to monetary policy during periods when house prices or mortgage debt are high (or low) relative to their underlying trends. In neither case are the estimated effects of monetary policy meaningfully different from the estimates shown in Figure 1.

One potential concern with using such a long time sample is that structural change has fundamentally altered the effects of monetary policy on the economy. To assess that possibility, the same analysis is conducted using only data from the period after the Second World War. For this shorter sample, the estimated effect on house prices is somewhat larger and the effect on output is smaller. This results in a larger estimated ratio of 5.7 for the decline in house prices relative to that in output, compared with the full-sample estimates.

The main result that monetary policy affects house prices and output is consistent with other estimates reported in the literature. Table 1 provides a summary of findings from numerous research papers using different samples and methodologies. For comparison, the first line of the table reports the results using the full-sample “baseline” estimates described above and shown in Figure 1; the second line reports the results using just the postwar sample. The remainder of the table reports results from other studies. In particular, these studies use different methods to identify exogenous movements in monetary policy than the approach I described earlier. The table reports the percent change in house prices and a measure of economic activity (typically real GDP) two years after a monetary policy shock. The results have been scaled so that the initial movement in the short-term interest rate is 1 percentage point. In cases where I could not get the precise estimates from the author, the numbers reported in the table are estimates based on a visual inspection of the charts included in the papers. 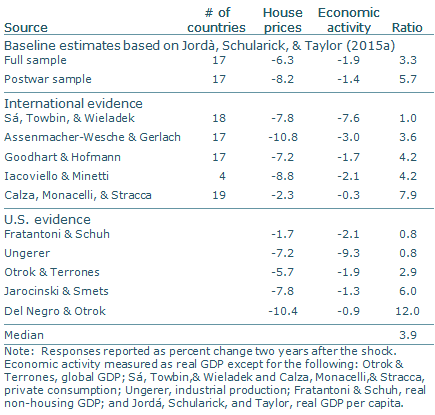 Although the individual estimates differ, the estimated ratios of the effect on house prices relative to that on real GDP after two years tend to be clustered between 3 and 6, with a median estimate of about 4. It is worth noting that one of the outliers likely in part reflects the specific measure of economic activity used: Ungerer (2015) reports industrial production, which tends to be more cyclically sensitive than GDP. Overall, the results on the ratio of the effects on house prices relative to GDP appear to be robust, especially for studies that include a large set of countries.

To put this in perspective, consider the magnitude of the run-up in house prices in the United States over 2000–06. Figure 2 shows the U.S. house price-to-rent ratio over the past 40 years. In the five years running up to the peak in the spring of 2006, the house price-to-rent ratio increased over 50%. Based on the empirical estimates described above, to offset this increase using monetary policy would require a decline in real GDP per capita of over 12%. That is far larger than the 5½% peak-to-trough decline in real GDP per capita the United States actually experienced in the Great Recession. Jordà, Schularick, and Taylor (2015b) conduct a similar analysis using a different measure of house price overvaluation, and reach the same overall conclusion. 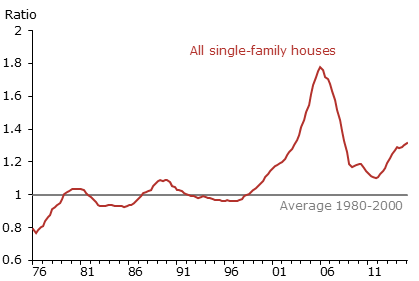 Note: Ratio of CoreLogic single-family house price index and owner-equivalent rent component of the price index for personal consumption expenditures, scaled to equal one at average value over 1980–2000.

Not all of these research papers report effects on inflation; however, consistent with the findings reported above, those that do also find that inflation moves in the same direction as house prices (Assenmacher-Wesche and Gerlach 2008; Jarocinski and Smets 2008; Iacoviello and Minetti 2008; Calza, Monacelli, and Stracca 2013; and Sá, Towbin, and Wieladek 2011). As noted earlier, the effects on inflation likely depend on the monetary policy regime, and this issue needs further study. Nonetheless, these findings add to the potential macroeconomic costs of directing monetary policy at house prices or other financial stability goals (see Williams 2015 for further discussion).

Iacoviello, Matteo, and Raoul Minetti. 2008. “The Credit Channel of Monetary Policy: Evidence from the Housing Market.” Journal of Macroeconomics 30(1), pp. 69–96.