Setting a higher minimum wage seems like a natural way to help lift families out of poverty. However, minimum wages target individual workers with low wages, rather than families with low incomes. As a result, a large share of the higher income from minimum wages flows to higher-income families. Other policies that directly address low family income, such as the earned income tax credit, are more effective at reducing poverty.

Raising the minimum wage has become a popular proposal to combat rising inequality and persistent poverty in the United States. Proponents argue that this policy could restore some modicum of fairness to the U.S. labor market. Since the last federal minimum wage increase in 2009 to $7.25 per hour, 23 states have raised their minimums above the federal level, and several cities have set or are considering minimum wages as high as $15 an hour.

A higher minimum wage reduces the inequality of wages earned by workers (Neumark, Schweitzer, and Wascher 2004). However, the merits of using this tool to reduce poverty depend on the extent to which poor families benefit from the increased wages, other responses by employers, and whether alternative policies would be more effective. This Letter discusses evidence on the effectiveness of the minimum wage relative to and in combination with other policies, such as the earned income tax credit. It also touches on other broader issues relevant to antipoverty policies, in particular whether a higher minimum wage reduces dependence on other programs that benefit poor or low-income families.

A single working adult with two children earning the federal minimum wage of $7.25 and working full-time earns about $14,500 a year, well below the U.S. poverty threshold of $19,073 for a family of this size. Numbers like these frequently underlie arguments to raise the minimum wage, citing either the hardship or the unfairness of a full-time worker earning “below poverty” wages. Clearly, an increase in the minimum wage has the potential to address this problem.

Deciding whether this is the most effective tool, however, is a good deal more complicated because minimum wages address low-wage work, whereas poverty is based on family income. One complication is research pointing to employment declines from minimum wage increases (see Neumark 2015), which means raising wages for some people must be weighed against potential job losses for others. In this case, whether a higher minimum wage on net helps poor and low-income families depends on the specific pattern of employment effects for different family types.

A second complication is that mandating higher wages for low-wage workers does not necessarily do a good job of delivering benefits to poor families. Of course, worker wages in low-income families are lower on average than in higher-income families. Nevertheless, the relationship between being a low-wage worker and being in a low-income family is fairly weak, for three reasons. First, 57% of poor families with heads of household ages 18–64 have no workers, based on 2014 data from the Current Population Survey (CPS). Second, some workers are poor not because of low wages but because of low hours; for example, CPS data show 46% of poor workers have hourly wages above $10.10, and 36% have hourly wages above $12. And third, many low-wage workers, such as teens, are not in poor families (Lundstrom forthcoming).

Considering these factors, simple calculations suggest that a sizable share of the benefits from raising the minimum wage would not go to poor families. In fact, if wages were simply raised to $10.10 with no changes to the number of jobs or hours, only 18% of the total increase in incomes would go to poor families, based on 2010–2014 data (Lundstrom forthcoming). The distributional effects look somewhat better at a higher threshold for low income, with 49% of the benefits going to families that have incomes below twice the poverty line. However, 32% would go to families with incomes at least three times the poverty line. By this calculation, about a third of the benefits would go to families in the top half of the income distribution.

Moreover, if we consider raising the minimum wage higher, for example to $12, only 15% of the benefits go to poor families, because other higher-wage workers who would benefit are less likely to be poor. Likewise, 35% would go to families with incomes at least three times the poverty line. With a $15 minimum wage the corresponding figures would be 12% and 38%. This evidence—coupled with the fact that employers who would pay the higher minimum wage are not necessarily those with the highest incomes, but instead may be owners of small businesses with low profit margins—indicates that minimum wages are a very imprecise way to raise the relative incomes of the lowest-income families.

The ineffective targeting of low-income families does not imply that higher minimum wages do not, on net, help the poor. Instead, the implication is that, for every dollar of benefit to poor families, there is also a large benefit to nonpoor families. This makes the minimum wage an inefficient redistributional policy.

Economists have studied how poverty rates change in states where the minimum wage is increased versus states with no increase. The evidence is much sparser than the huge research literature on the changes to employment from minimum wages (Neumark 2015). Although there are isolated exceptions in both directions (see Neumark et al. 2005 and Dube 2013), the general conclusion from this literature is that there is no statistically significant relationship between raising the minimum wage and reducing poverty (see Neumark and Wascher 2008 and Sabia, Burkhauser, and Nguyen 2015).

However, the distributional effects may have improved. The efficiency of the minimum wage in reaching its intended target has crept up slightly in the past decade, as a by-product of the unfortunate declines in income among near-poor minimum wage workers (Lundstrom forthcoming).

Nonetheless, the evidence simply does not provide a strong case for using minimum wages to reduce poverty. Similarly, recent research does not provide conclusive evidence that a higher minimum reduces government spending on welfare and other programs to support poor families, with the possible exception of food stamps (Sabia et al. 2015 and Reich and West 2015).

The minimum wage is not the only policy available to increase income from work. Since the 1970s, the earned income tax credit (EITC) has offered a subsidy to earnings for low-income families, mainly those with children. For example, under current federal EITC guidelines, families with two children receive a 40% subsidy to their labor market earnings, up to a maximum of $5,548, which phases out as incomes rise. Many states also supplement this federal credit. Moreover, the EITC has become substantially more generous over time. Since the EITC expanded significantly in the mid-1990s, the real value of the minimum wage has declined; however, the real value provided by the two policies combined for families with children now exceeds what the minimum wage alone used to provide (Figure 1). 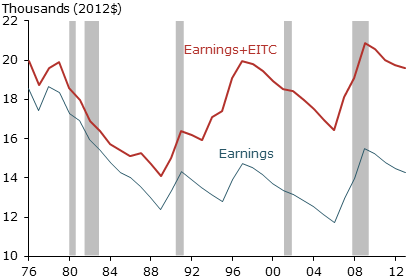 As might be expected, the EITC has proven more effective at reducing poverty than the minimum wage (Neumark and Wascher 2011). First, because the EITC is based on family income and structure, it effectively targets low-income families with higher needs. Second, because the EITC subsidizes labor market earnings, it induces those most strongly affected, who tend to be single mothers, to enter the labor market—hence boosting employment, in contrast to the minimum wage. Moreover, the EITC not only reduces poverty by providing extra income, its pro-work incentives also increase the likelihood that families can earn their way out of poverty even before receiving their EITC check.

This evidence, combined with what we know about minimum wages, suggests that the EITC is a much more effective policy to combat poverty. To achieve further gains, it could be made more generous. Moreover, because the EITC is financed by taxes, this redistribution can be financed by those with the highest incomes, rather than by those who employ minimum wage workers, who do not necessarily earn high incomes (see Mankiw 2014).

Some critics have argued that the EITC lowers wages, labeling it “corporate welfare” (Ritholtz 2013). From the perspective of trying to increase employment, this argument is ill-founded: The EITC lowers labor costs for employers, so eligible workers end up earning more per hour once the credit is factored in—which is the reason labor supply increases. Nonetheless, the criticism is correct in the sense that the increasing return to work that the EITC generates is in part offset by reduced wages, and the EITC does lead to lower wages for some ineligible workers.

Finally, the minimum wage can complement the EITC (Neumark and Wascher 2011) by increasing work incentives for women with children who face high work-related expenses like child care. In particular, combining a higher minimum wage and a more generous EITC leads to larger poverty reductions for single women with children. For example, Figure 2 shows that at the average minimum wage, a 10% higher EITC phase-in rate leads to an estimated 1.6 percentage point decline in poverty. However, that same 10% higher EITC phase-in rate reduces poverty by 3.4 percentage points when combined with a minimum wage that is 25% higher. Although this combination leads to more adverse employment effects than either policy in isolation for EITC-ineligible groups like teenagers and less-skilled minority men, the effects across the income distribution remain favorable. 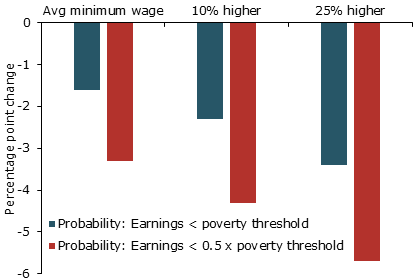 Raising the minimum wage will certainly benefit some workers and has the appeal of greater fairness.

However, minimum wages represent a cost to businesses, consumers, and other workers who may face fewer job opportunities. Therefore, it is important to ask how well the benefits are targeted on the poor and low-income families the policy is intended to help. Because minimum wages focus on low worker wages and not low family incomes—and because these two conditions are only weakly related—the targeting of minimum wages is imprecise: Few of the benefits are likely to flow to poor families, and some go to quite high-income families. Perhaps reflecting this problem, there is little evidence that higher minimum wages alone reduce poverty or dependence on government programs. The earned income tax credit targets low-income families much better, increases employment, and reduces poverty, and for all these reasons seems far more effective. Policymakers are likely to do a better job fighting poverty by making the EITC more generous than by raising the minimum wage. Furthermore, using both of these policies together is more effective than minimum wage increases in isolation.

Lundstrom, Samuel. Forthcoming. “Why Did the Target Efficiency of the Minimum Wage Increase in Recent Years?” Forthcoming in Contemporary Economic Policy.

Neumark, David, Mark Schweitzer, and William Wascher. 2005. “The Effects of Minimum Wages on the Distribution of Family Incomes: A Non-parametric Analysis.” Journal of Human Resources 40(4), pp. 867–917.