The Recent Rise and Fall of Rapid Productivity Growth

Information technology fueled a surge in U.S. productivity growth in the late 1990s and early 2000s. However, this rapid pace proved to be temporary, as productivity growth slowed before the Great Recession. Furthermore, looking through the effects of the economic downturn on productivity, the reduced pace of productivity gains has continued and suggests that average future output growth will likely be relatively slow.

The past decade has been wrenching for the U.S. and global economies. In the depths of the Great Recession, the U.S. unemployment rate rose to 10%, reflecting an economy operating far short of its potential. As the effects of the Great Recession have receded, it is important to know how fast the economy can sustainably grow going forward. This Economic Letter explores trends in productivity growth—a key contributor to this sustainable pace. A recent paper by Fernald (2014a) finds that the exceptional boost to productivity growth from information technology in the late 1990s and early 2000s has vanished during the past decade. Although there is considerable uncertainty, a relatively slow pace is the best guess for the future.

The slowdown in productivity growth before the Great Recession

Output grows because of a rise in hours worked, productivity (output per hour), or both. Figure 1 shows that the contributions of both hours and productivity have varied over time for the U.S. business sector. From the early 1970s through 1995, productivity rose about 1½% per year. Between 1995 and 2003, that pace more than doubled to a rate that was comparable to its fast pace before 1973. Considerable evidence suggests this acceleration in the late 1990s reflects the production and use of information technology (IT). We will return to the IT story in the next section. 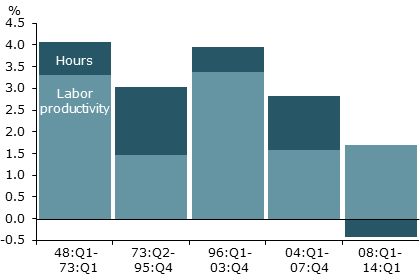 In contrast, hours worked have declined since the recession—even though the working-age population (ages 16 to 64) increased 0.7% per year over this period. Weak aggregate demand associated with the deep recession and slow recovery, as well as associated labor market dislocations, have held down employment (see Elsby, Hobijn, and Sahin 2013 and Leduc and Liu 2014). Thus, the sluggish output growth since 2007 reflects poor productivity trends that predate the recession, along with labor market shortfalls since.

Why does labor productivity typically rise over time? One factor is increased worker skills such as education and experience. A second is growth in the equipment, structures, and intellectual capital that workers use. When firms invest in new plants or automate a process, each worker has more or better “tools,” or capital, to work with and should be able to produce more.

Fernald (2014a) finds that changes in these first two factors cannot explain the slowdown in productivity growth after 2003. For example, the average educational attainment of the workforce has continued to increase. And although capital growth has been subdued since the Great Recession—reflecting weak output growth, heightened economic and political uncertainty (Leduc and Liu 2014), and other influences—the number of hours worked has fallen since 2007. So capital per hour worked has continued to grow modestly.

Rather, the important factor after 2003 is slower growth in innovation. Economists typically measure the effects of innovation on the economy indirectly as the residual part of productivity growth that cannot be explained by the other factors. This measure is known as total factor productivity (TFP). In the long run, TFP captures productivity benefits from many sources. These include formal and informal research and development, improvements in management practices, reallocation as high productivity firms drive out low productivity firms, benefits from government-provided infrastructure (see Fernald 1999), and other efficiency gains.

Figure 2 shows two measures of TFP. The standard measure (blue line) shows that growth sped up in the mid-1990s and has slowed since the mid-2000s. Indeed, the measured level of TFP declined for almost two years before the Great Recession. 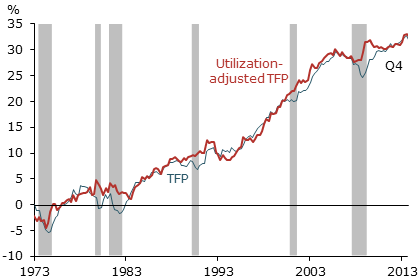 During the recession itself, TFP initially fell further, but this does not mean that innovation slowed. In the short run, TFP fluctuates with demand, as firms vary how intensively they use their capital and labor. For example, typically when the economy goes into recession and demand falls, businesses that believe the reduced demand is temporary will want to retain much of their existing workforce. In that case, with a similarly sized workforce producing less than before, measured labor productivity and TFP fall. Conversely, when demand recovers, those businesses have excess capacity and can quickly ramp up production without needing substantial investment or hiring, so productivity surges. TFP shows this pattern in 2009 and 2010.

Fernald (2014b) provides an alternative measure of TFP, shown in Figure 2 (red line), that adjusts for these variations in how intensively resources are used. This measure shows the same pattern of fast growth in the late 1990s and early 2000s and slower growth since. But, by 2014, the variations no longer had an important quantitative effect.

Despite disruptions from the downturn, Figures 1 and 2 make it clear that the slowdown in labor productivity and TFP predated the Great Recession. The crisis might have affected the level or growth rate of economy-wide innovation through various channels. These include credit constraints on innovative firms (Liu and Wang 2014), the degree of reallocation from low- to high-productivity producers (Petrosky-Nadeau 2013), or other channels. But the figures suggest that those effects are modest relative to the slowdown in TFP growth that started well before the Great Recession.

An easing in the IT revolution?

Fernald (2014a) examines industry data for clues about why aggregate TFP growth slowed. He finds that the slowdown was in sectors that produce IT or use IT intensively.

The hypothesis that IT was the culprit is natural. Research links the mid-1990s speedup in TFP growth to the exceptional contribution of computers, communications equipment, software, and the Internet. Indeed, IT has had a broad-based and pervasive effect on the economy through its role as a “general purpose technology,” that is, one that fosters complementary innovations, such as business reorganization to take advantage of improved information management and communications. But by the early 2000s industries like retailing were already substantially reorganized. Thus, more recent gains from IT might have been more incremental than transformative.

Figure 3 shows evidence in favor of the IT hypothesis, breaking down the aggregate percent change in TFP for the periods shown into the contribution of different industry groupings. Since cyclical factors from the Great Recession might still affect the data for 2007–11, we will focus our discussion on the pre-recession period. 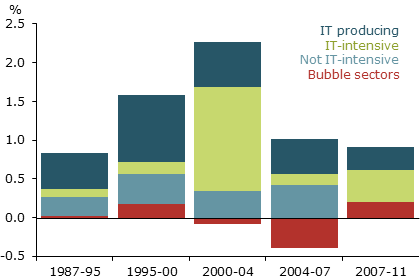 One slice of the data focuses on the “bubble” industries of the mid-2000s, that is, construction, real estate, finance, and natural resource industries. These industries behaved in unusual ways in the mid-2000s—with the housing boom and subsequent bust, excesses in the financial sector, and surging commodity prices. The contribution of bubble industries to overall TFP fell—becoming more negative—between the 2000–04 and 2004–07 periods. But the contribution of the remaining three-quarters of the economy fell even more, as shown by comparing the bars that lie above zero for those same two periods.

The non-bubble industries are divided into three mutually exclusive groups: IT producers, intensive IT-users, and other industries that do not use IT intensively. The latter two categories are based on data from the Bureau of Labor Statistics (BLS) on estimated payments for IT capital as a share of an industry’s value added.

As the figure shows, the TFP slowdown is concentrated in industries that produce IT or that use IT intensively. The contribution of IT producers was inordinately high in the late 1990s, accounting for over half of overall TFP growth in this period—even though they account for only 5% of the economy. Much of that surge reflected gains in hardware production, in part because competition within the semiconductor industry led to the faster introduction of new chips. In the 2000s, the pace of TFP gains in IT production eased. Hence, the direct contribution of IT-producing industries fell.

In the early 2000s, the contribution of intensive IT-using industries bulged but then receded markedly in the 2004–07 period. This group of industries includes broadcasting and telecommunications, wholesale trade, utilities, some services (such as professional, scientific, and technical), and a few manufacturing industries (such as chemicals). That pattern supports the view that benefiting from IT takes substantial intangible organizational investments that raise measured productivity later. By the mid-2000s, the low-hanging fruit of IT-based innovation had been plucked.

Three out of the past four decades have seen business-sector productivity growth near 1½%. We could well see future growth in that range. Of course, such a forecast would completely discount the fast growth of 1995 to 2003. Fernald (2014a) uses a statistical method that puts more weight on recent observations but nevertheless puts some weight on the fast-growth period—appropriate if what we’ve seen is simply a pause in the ongoing IT revolution. This approach suggests a slightly faster forecast of 1.9% per year. With reasonable assumptions about the non-business sector and demographics, that would translate into GDP growth of 2.1% per year and GDP per hour growth of 1.6%. This pace of gains is slow relative to historical performance.

However, uncertainty about future productivity growth remains high. Pessimists argue that IT is less important than great innovations of the past that dramatically boosted productivity, such as electricity or the internal combustion engine. Optimists point to the possibilities offered by robots and machine learning. In addition, as Fernald and Jones (2014) argue, countries like China and India are now conducting research that is relevant for advanced economies like the United States. History suggests that it is hard to know until after the fact how revolutionary any particular innovation will turn out to be.

The most recent slowdown in productivity growth predated the Great Recession of 2007–09. Hence, it does not appear related to financial or other disruptions associated with that event. Rather, it appears to mark a pause in—if not the end of—exceptional productivity growth associated with information technology. Many transformative IT-related innovations showed up in the productivity statistics in the second half of the 1990s and early 2000s. Over the past decade, however, productivity gains have been more incremental.

Fernald, John. 2014a. “Productivity and Potential Output Before, During, and After the Great Recession.” Forthcoming, NBER Macroeconomics Annual 2014.

Fernald, John, and Charles Jones. 2014. “The Future of U.S. Economic Growth.” AEA Papers and Proceedings, May.