Since 2007, Federal Open Market Committee participants have been persistently too optimistic about future U.S. economic growth. Real GDP growth forecasts have typically started high, but then are revised down over time as the incoming data continue to disappoint. Possible explanations for this pattern include missed warning signals about the buildup of imbalances before the crisis, overestimation of the efficacy of monetary policy following a balance-sheet recession, and the natural tendency of forecasters to extrapolate from recent data.

In November 2007, the Federal Open Market Committee began releasing projections for real GDP growth four times per year in its Summary of Economic Projections (SEP). The SEP reports the central tendency and range for real GDP growth forecasts from the Federal Reserve Board members and Federal Reserve Bank presidents. Over the past seven years, many growth forecasts, including the SEP’s central tendency midpoint, have been too optimistic. In particular, the SEP midpoint forecast (1) did not anticipate the Great Recession that started in December 2007, (2) underestimated the severity of the downturn once it began, and (3) consistently overpredicted the speed of the recovery that started in June 2009. The SEP growth forecasts have typically started high, but then are revised down over time as the incoming data continue to disappoint. Similar patterns are observed in the consensus private-sector growth forecasts compiled by the Blue Chip Economic Survey. This Economic Letter reviews the SEP’s track record of forecasting growth and considers some explanations for the optimistic bias.

Figure 1 plots the evolution of the SEP’s midpoint growth forecast for the years 2008 through 2010. The vertical axis indicates the growth forecast for a given year (in percent), while the horizontal axis indicates the date the forecast was released. For example, the red line shows how the 2009 growth forecast evolved from its first release in October 2007 to its final release in October 2009. Figure 2 plots similar information for the 2011 through 2013 forecasts. The shaded bars indicate the trailing 12-month percentage change in the Standard & Poor’s (S&P) 500 stock price index that would have been observed on the date shown. In both figures, the growth forecast for a given year starts high, but then is typically revised down. The pattern of revisions appears roughly aligned with movements in the S&P 500 index. The S&P index movements would be expected to capture investors’ reactions to incoming economic data and the implications for future growth and profits. In five out of six years, the actual growth rate for a year (bold X) is below the starting value of the SEP forecast for that year. 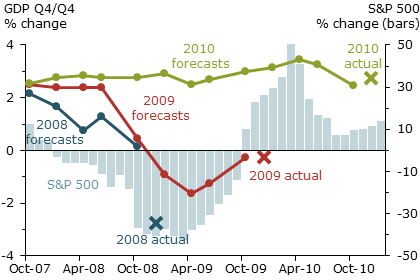 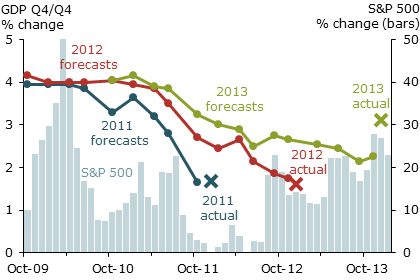 Figure 1 shows that the SEP growth forecast for 2008 never turned negative. At the time, the mainstream view was that the U.S. economy would avoid a recession despite the ongoing housing market turmoil. The actual growth rate for 2008 turned out to be –2.8%—the largest annual decline since 1946. The SEP growth forecast for 2009 did not turn negative until January 2009. This was the first forecast released after the Lehman Brothers bankruptcy in September 2008. The 2009 growth forecast reached a low point of –1.7% in April 2009 but was later revised up, coinciding with a rebound in stock prices. The actual growth rate for 2009 was –0.24%.

The SEP midpoint forecast for 2010 started at 2.6%. It was later revised up but then adjusted downwards, ending close to the actual growth rate of 2.7%. A notable feature of the SEP growth forecasts for 2011 through 2013 are the extremely high starting values—around 4% or higher (Figure 2). The last period of multiyear growth over 4% in the U.S. economy was during the tech-bubble years of 1996–99. The overoptimistic SEP growth forecasts for 2011 through 2013 were eventually cut in half, each ending around 2%. The actual growth rates for those years were 1.7%, 1.6%, and 3.1%.

Another way to view the SEP growth forecasts is to translate them into implied paths for the level of real GDP, as in Figure 3. For example, starting with the level of real GDP at the end of 2007, we apply the January 2008 release of the SEP’s midpoint growth forecast for years 2008 through 2010 to construct a forecast path for the level of real GDP. We update this path using SEP midpoint forecasts in January or March of subsequent years, each time lifting off from the actual level of GDP at the end of the preceding year. The solid black line shows the path of actual GDP while the dashed line shows potential GDP, as estimated by the Congressional Budget Office (CBO) in 2015. This estimate has been revised down repeatedly since 2007. Potential GDP is the output the economy can sustainably produce if labor and other resources are fully employed. Until recently, SEP participants expected a rapid catch-up to potential GDP. Unfortunately, more than five years after the Great Recession ended, actual GDP remains 1.9% below its estimated potential. The sluggish recovery has tempered some of the SEP participants’ optimism; more recent SEP releases imply a slower catch-up to potential GDP. 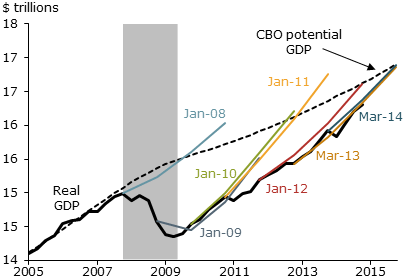 Economic forecasting can be a humbling endeavor. In a cross-country study of private-sector forecasts from 1989 to 1998, Loungani (2001) finds that “the record of failure to predict recessions is virtually unblemished.” He also finds that forecast revisions in one direction tend to be followed by further revisions in the same direction and that one-year-ahead growth forecasts are typically too optimistic. An updated study by Ahir and Loungani (2014) finds that the private-sector’s record of failure to predict recessions remained intact through 2008 and 2009. A study by Alessi, et al. (2014) finds that one-year-ahead growth forecasts from the Federal Reserve Bank of New York and the European Central Bank from 2008 to 2012 exhibited substantial overoptimism, averaging 1.6 to 2.4 percentage points above actual growth. The SEP growth forecasts fit the pattern of these various studies.

Notwithstanding the typical failure to predict recessions, it is worth considering whether some warning signals about the Great Recession went unheeded. The report of the U.S. Financial Crisis Inquiry Commission (2011) states, “Despite the expressed view of many on Wall Street and in Washington that the crisis could not have been foreseen or avoided, there were warning signs. The tragedy was that they were ignored or discounted” (p. xvii). The report lists such red flags as “an explosion in risky subprime lending and securitization, an unsustainable rise in housing prices, widespread reports of egregious and predatory lending practices, [and] dramatic increases in household mortgage debt.” In an analysis of the New York Fed’s failure to forecast the Great Recession, Potter (2011) identifies three main culprits: (1) a “misunderstanding of the housing boom… [which] downplayed the risk of a substantial fall in house prices,” (2) “a lack of analysis of the rapid growth of new forms of mortgage finance,” and (3) the “insufficient weight given to the powerful adverse feedback loops between the financial system and the real economy.”

According to the SEP, “each participant’s projections are based on his or her assessment of appropriate monetary policy.” A possible explanation for the SEP’s prediction of a rapid catch-up to potential GDP after 2009 is that participants overestimated the efficacy of monetary policy in the aftermath of a so-called balance-sheet recession. Recessions triggered by financial crises are typically preceded by sustained episodes of bubbly asset prices and debt-financed spending booms. When the bubble bursts, the resulting debt overhang forces borrowers to repair their balance sheets via reduced spending or default. Borrowers have too much debt, so monetary policy actions designed to encourage more borrowing by lowering interest rates are less effective. Balance-sheet recessions are typically followed by sluggish recoveries and permanent output losses, that is, real GDP never returns to its pre-crisis path (Bank for International Settlements 2014). The SEP’s overprediction of the speed of the recovery could also be linked to other factors. These include possibly underestimating the damage to the economy’s supply side, as evidenced by the downward revisions to potential GDP, or perhaps expecting larger effects from stimulative federal fiscal policy.

A final explanation for the pattern of SEP growth forecasts may be linked to a natural human tendency to assume that recent trends will continue. Research shows that people tend to use simple forecast rules that extrapolate from recent data (Williams 2013). For example, one could forecast four-quarter growth over the coming year using only the most recent observation of quarterly growth in the preceding year. The backward-looking nature of this forecasting rule would help explain the failure to predict recessions. Figure 4 tests the plausibility of this simple forecasting rule. The vertical axis plots the SEP growth forecasts for 2008 through 2014, as reported in the January, March, or April SEP releases, before any GDP data for the forecast year in question had been released. The horizontal axis plots the preceding year’s most recent annualized quarterly growth rate, computed from real-time data available on the SEP release date. There is a strong correlation between the two series. The simple forecasting rule can account for 62% of the variance in the SEP growth forecasts. Historically, however, there is very little correlation between the quarterly growth rate at the end of one year and the actual growth rate over the next year. 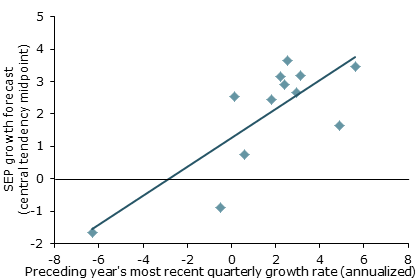 Research has identified numerous instances of persistent bias in the track records of professional forecasters. These findings apply not only to forecasts of growth, but also of inflation and unemployment (Coibion and Gorodnichencko 2012). Overall, the evidence raises doubts about the theory of “rational expectations.” This theory, which is the dominant paradigm in macroeconomics, assumes that peoples’ forecasts exhibit no systematic bias towards optimism or pessimism. Allowing for departures from rational expectations in economic models would be a way to more accurately capture features of real-world behavior (see Gelain et al. 2013).

Ahir, Hites, and Prakash Loungani. 2014. “Can Economists Forecast Recessions? Some Evidence from the Great Recession.” Manuscript.

Coibion, Olivier, and Yuriy Gorodnichencko. 2012. “What Can Survey Forecasts Tell Us about Information Rigidities?” Journal of Political Economy 120(1), pp. 116–159.

U.S. Financial Crisis Inquiry Commission. 2011. “Final Report on the Causes of the Financial and Economic Crisis in the United States.” Pursuant to Public Law 111-21 (January). http://www.gpo.gov/fdsys/pkg/GPO-FCIC/content-detail.html