The earnings gap between people with a college degree and those with no education beyond high school has been growing since the late 1970s. Since 2000, however, the gap has grown more for those who have earned a post-graduate degree as well. The divergence between workers with college degrees and those with graduate degrees may be one manifestation of rising labor market polarization, which benefits those earning the highest and the lowest wages relatively more than those in the middle of the wage distribution.

Holding a four-year college degree gives a worker a distinct advantage in the U.S. labor market. The wage gap between college-educated working adults and those with high school degrees is large and has grown steadily over the past 35 years. This gap appears to be bolstered by technological advances in the workplace, notably the ever-growing reliance on computers, because the skills needed to apply these technologies are often acquired through or associated with higher education. Since 2000, however, this trend has altered. Increasingly, the U.S. labor market favors workers who hold a graduate degree, while the wage advantage for those who hold a four-year college degree has changed little. In this Economic Letter, I examine the potential explanations for this change. I focus on the polarization hypothesis, which emphasizes employment and wage growth at the top and bottom portions of the skill distribution (Acemoglu and Autor 2011).

The wage returns to higher education

The most common metric for assessing the benefits of a college education is the earnings advantage that it gives workers. There are other important benefits as well, including job attributes such as more generous fringe benefits and greater stability and autonomy. However, the earnings advantage is more easily measured and arguably the most important element from an economic and social perspective.

Figure 1 displays the earnings advantage attributable to college and post-graduate education in the United States over the 35 years from 1979 to 2013. It shows the gap in average hourly wages for all workers ages 25 to 64, both hourly and salaried, for three educational groupings: the broad group of all workers with at least a four-year college degree, labeled “College plus,” and the two subgroups consisting of those with a four-year degree only and those who also hold a post-graduate degree. The gaps are measured as the percentage difference in wages for these groups compared with workers who hold a high school degree only. The differences account for the changing demographic composition of each group, which also affects earnings and therefore can distort the wage differentials that are directly associated with educational attainment. To do this, I use a standard economic method called a statistical regression, which adjusts for the evolving differences between the educational groups in regard to age, gender shares, race or ethnicity, marital status, and broad geographic location based on nine Census divisions. This approach is similar to Abel and Deitz (2014), Lindley and Machin (2013), and extensive earlier research. 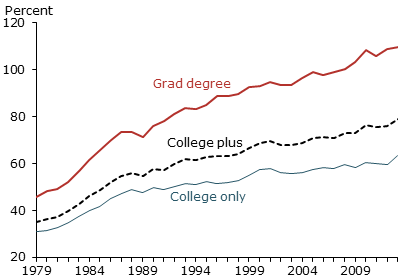 Figure 1 shows substantial increases in the wage returns to a college education over time. In 1979 the average wage for the broad group of all workers with at least a college degree was about 35% higher than the average wage of workers with a high school degree. Growth in the gap was rapid in the 1980s and then continued at a slower pace, reaching nearly 80% by 2013.

The pattern for the entire group masks different patterns for the underlying subgroups of college-educated workers, however. Over the entire period shown, growth in the wage gap has been more rapid for individuals holding a post-graduate degree than for those with only a four-year college degree. This caused the wage gap between the two subgroups to widen substantially, from about 11% in 1979 to nearly 30% in 2013, expressed as a percentage of average wages in the college-only group. The relative gains for individuals holding a post-graduate degree is especially noticeable since 2000. Since that year, the wage gap has risen about 17 percentage points for those with a post-graduate degree, versus about 6 percentage points for those with a four-year college degree only. The excess returns for post-graduates have propped up the gains for the college-educated group as a whole over time. However, it is clear that individuals holding a post-graduate degree are in an increasingly favorable labor market situation compared with the college-only group, especially since 2000.

The role of polarization

Research on wage inequality points to a variety of sources of rising wage gaps between labor market groups. Among the leading explanations is the polarization hypothesis (Acemoglu and Autor 2011). This is a variant of the skill-biased technological change (SBTC) explanation of labor market developments, in which ever-increasing reliance on computer-related technologies increases the employment and wages of workers, mainly the highly educated, whose skills enable them to apply those technologies. The polarization hypothesis is a refinement of the SBTC story that accounts for excess employment and wage growth in the top and bottom portions of the wage distribution, with erosion in the middle.

The polarization hypothesis revolves around the idea that new workplace technologies tend to replace workers whose job tasks are largely routine in nature. To assess the extent of polarization, it is common to divide jobs into four broad categories defined by the nature of the tasks involved, routine versus non-routine and cognitive versus manual (following Acemoglu and Autor 2011). Routine jobs are those that follow relatively set rules and consist largely of repeated actions, for which computer technologies are well-suited and can largely replace human labor. By contrast, non-routine jobs require flexibility and often social skills. The second dimension, cognitive versus manual, reflects the mental versus physical focus of the required tasks.

The combination of these two dimensions forms a straightforward hierarchy of skills and wages in the job market. Non-routine cognitive jobs are at the top of the hierarchy. They rely heavily on abstract reasoning skills, tend to pay well, and generally employ highly educated individuals; they include mostly professional and technical occupations, such as management, medicine, law, engineering, and design work. By contrast, routine cognitive and routine manual jobs are concentrated toward the middle of the wage and skill distribution. They include white-collar office jobs such as bookkeeping and clerical work, as well as selected blue-collar occupations that involve repetitive production or monitoring activities. Some of these tasks are also easy to send offshore to foreign sites, reinforcing downward pressure on U.S. employment in these categories due to computerization. Finally, non-routine manual jobs consist mostly of service-based occupations such as food preparation and serving, maintenance work, in-home health services, and transportation and security services. These jobs typically do not require extensive education or technical skills, but they are not readily replaced by computer-based technologies and therefore are difficult to automate or send offshore.

In recent years, labor demand and job growth have been relatively rapid in the high-skill non-routine cognitive and low-skill non-routine manual categories, with the middle-skill routine jobs experiencing downward pressure. This pattern can be seen in Figure 2, which displays annual job growth rates for the four categories over three periods. The figure shows substantial growth for all groups on average from 1983 to 2000. Growth generally was most rapid for non-routine jobs. By contrast, after growing at a moderate pace from 1983 to 2000, employment in both categories of routine work remained mostly flat from 2000 to 2007, and then fell significantly on net during the Great Recession and recovery period from 2007 to 2014. Job growth was instead concentrated in the non-routine cognitive and manual occupations, which generally are at the top and bottom of the skill distribution, respectively. The recent losses for the routine jobs that tend to be in the middle of the skill distribution illustrate the growing polarization of the labor market. 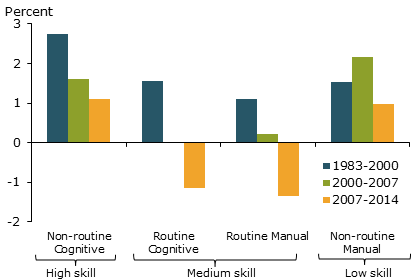 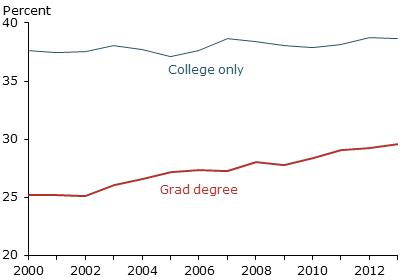 A post-graduate degree is an increasingly important part of the skill portfolio for individuals in the high-skill non-routine cognitive occupations. This finding should not be interpreted as implying that a college degree is an inadequate credential for labor market success. As shown in Figure 1, the wage gap for people with college degrees continues to be very high, and recent research has verified that a four-year college degree remains a sound financial investment for most workers (Daly and Bengali 2014, Abel and Deitz 2014).

Nevertheless, the findings in this Economic Letter appear to highlight an important role for new technologies and labor market polarization, with implications for the U.S. wage structure. Lindley and Machin (2013) report similar findings regarding the growing gap between graduate and college-only degree holders. They also show that the proportion of workers with post-graduate degrees rose more in occupations that experienced larger increases in computer use in recent decades. This reinforces the apparent link, or complementarity, between computer-based workplace technologies and the skills of workers with graduate degrees.

On the other hand, Beaudry, Green, and Sand (2013) present evidence that the importance of technological skills in the U.S. labor market has declined since the year 2000. This also corresponds to the period of relative stagnation in the wages of college-only versus post-graduate degree holders shown in Figure 1. Their evidence suggests that the growing wage gap for post-graduate degree holders reflects their direct competitive advantage over lesser-educated individuals in regard to well-paid jobs, rather than their skills complementing the evolving technological content of jobs. This view can also explain rising “underemployment” of young college graduates, defined as their tendency to work in jobs that do not strictly require a college degree (as in Abel, Deitz, and Su 2014 and Rampell 2014). Sorting out the specifics of enhanced versus diminishing reliance on technological advances in the workplace is a critical labor market issue that may have important implications for future U.S. education policies.