Assessing the Recent Behavior of Inflation

Inflation has remained below the FOMC’s long-run target of 2% for more than three years. But this sustained undershooting does not yet signal a statistically significant departure from the target once the volatility of the 12-month mean inflation rate is taken into account. Furthermore, the empirical Phillips curve relationship that links inflation to the size of production or employment gaps has been roughly stable since the early 1990s. Hence, continued improvements in production and employment relative to their long-run trends would be expected to put upward pressure on inflation.

Correction: This Letter has been revised to use uncertainty levels based on the standard deviation of the 12-month mean inflation rate instead of the standard deviation of monthly inflation rates over the past year, along with an explanation of the distinction between the two statistics. Figure 1 has been revised accordingly, and the related data have been updated through August 2015. This change does not significantly alter the author’s overall findings.

The Federal Open Market Committee’s statement of longer-run goals indicates that a 2% inflation rate, as measured by the 12-month change in the price index for personal consumption expenditures (PCE), is consistent with the Committee’s statutory mandate for ensuring stable prices (Board of Governors 2015b). The FOMC’s preferred measure of inflation has remained below 2% for more than three years, even though both production and employment have improved substantially over the same period. In its statement following the June 17 meeting, the FOMC said it “expects inflation to rise gradually toward 2% over the medium term as the labor market improves further and the transitory effects of earlier declines in energy prices and import prices dissipate” (Board of Governors 2015a).

This Economic Letter compares the recent behavior of PCE inflation with earlier periods going back to the early 1990s. It turns out that recent inflation behavior departs only mildly from earlier patterns. Taking into account the volatility of the 12-month mean inflation rate, the recent departure of this statistic from the 2% target rate does not appear particularly significant or permanent in comparison with earlier episodes. Moreover, since the early 1990s, the empirical Phillips curve relationship that links inflation to the deviations of production or employment from their longer-term trends appears roughly stable. Hence, continued improvements in production and employment relative to their long-run trends would be expected to put upward pressure on inflation.

To illustrate inflation’s recent behavior, Figure 1 shows monthly inflation rates as measured by the one-month percent change in the PCE price index from January 1992 to August 2015. The horizontal dashed line at 0.165% is equivalent to a 12-month compound inflation rate of 2%, which corresponds to the FOMC’s long-run inflation target. In other words, if monthly inflation were 0.165% for 12 consecutive months, the resulting 12-month change in the PCE price index would exactly equal 2%. 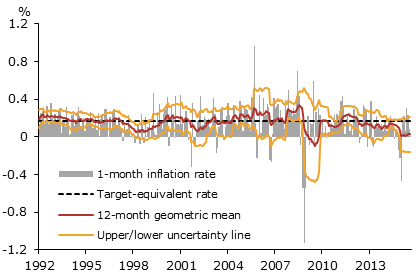 Consistent with standard econometric practice for judging statistical significance, adding and subtracting two times the standard deviation of the 12-month mean defines a range of inflation rates around the mean—known as an uncertainty band—that takes into account the fact that the 12-month mean inflation rate, like any economic statistic, is subject to temporary random shocks and measurement error.

Going back to the early 1990s, the uncertainty band surrounding the 12-month mean (defined by the area between the yellow lines in Figure 1) has almost always included the target rate of 0.165%. Small and relatively brief exceptions occurred in 1998 and 2008. An interesting feature is that the uncertainty band has become noticeably wider since 2000, mainly due to the higher volatility of energy prices, which are included in the PCE price index. The uncertainty band continues to include the target rate toward the end of the data sample, meaning that the recent sustained departure of the 12-month mean from the target does not yet signal a permanent downward shift in the level of inflation. Rather, the departure remains within the range of typical fluctuations in monthly inflation that arise from temporary factors.

As noted earlier, the FOMC expects medium-term inflation to rise gradually as the labor market improves. One common way to explore the link between inflation and employment is through the well-known Phillips curve relationship. The Phillips curve theory says that an increase in production or employment relative to its long-run trend—as in, say, a boom or a strong recovery—would be expected to put upward pressure on prices and wages, eventually leading to higher inflation. But when production and employment return to trend, inflation would be expected to eventually stabilize at its long-run target level.

Liu and Rudebusch (2010) found that inflation declines in 2008 and 2009 were well described by a Phillips curve equation that included the unemployment rate as an explanatory variable. More generally, however, research has shown that over long periods spanning several decades, there is not a stable quantitative relationship between inflation and the size of production or employment gaps, where gaps are measured by the deviations from long-run trends. As such, there is much debate among economists regarding the usefulness of the Phillips curve as a tool for forecasting inflation (see Lansing 2002, 2006). Given that the FOMC is partly employing a Phillips curve-based rationale to predict that inflation will “rise gradually toward 2%,” it is worth considering whether the presumed Phillips curve relationship in the data may have shifted since the Great Recession ended in June 2009.

As a first step in estimating a Phillips curve relationship, I use Federal Reserve Board data for the industrial production index from January 1992 to May 2015. The long-run trend for industrial production is constructed using a statistical technique known as the Hodrick-Prescott filter to remove fluctuations in the data that are attributable to business cycles or noise (see Hodrick and Prescott 1997). The filter is similar in principle to methods that are routinely used to remove seasonal fluctuations from economic data.

Figure 2 shows that industrial production was operating above trend during the boom years that preceded the two recessions that began in March 2000 and December 2007. In both cases, industrial production fell during the recessions, ending up below trend at the start of the recoveries in December 2001 and July 2009. Although not shown here, a similar pattern appears from plotting the Bureau of Labor Statistics’ nonfarm payroll employment series against a long-run employment trend constructed in a similar way. Using these data, the “gaps” in industrial production and payroll employment can be computed as the percentage deviation of each series from its long-run trend. 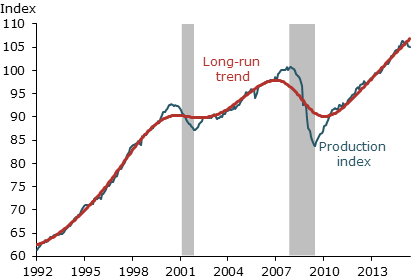 The next step is to assess how each of these gap measurements correlates with 12-month PCE inflation. Figure 3 shows the relationship between the industrial production gap and inflation for two sample periods. The first period (blue dots) runs from January 1992 to June 2009. The second (red dots) runs from July 2009 to May 2015, corresponding to the recovery from the Great Recession. Both periods display a statistically significant positive correlation between inflation and the size of the gap, consistent with the Phillips curve theory. The upward-sloping lines depict the fitted relationship for each sample period. In both sample periods, a 1 percentage point increase in the production gap would predict about a 0.3 percentage point increase in the 12-month inflation rate. Using all of the data, a production gap of zero would predict a 12-month inflation rate of 1.94%—very close to the FOMC’s long-run target. 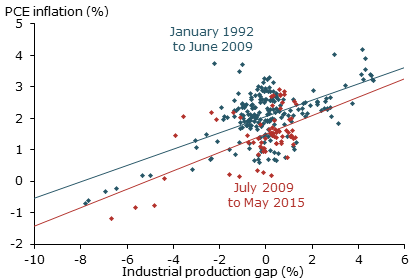 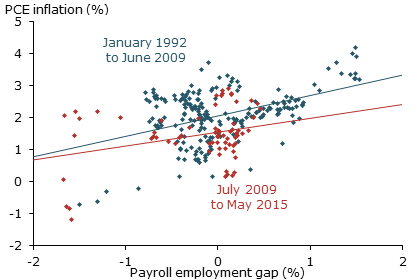 Policymakers and the popular media have expressed some concern that the FOMC’s preferred measure of inflation has remained below the long-run target level of 2% for over three years. Nevertheless, this lengthy undershooting does not yet signal a statistically significant departure from the target after accounting for the volatility of the 12-month mean inflation rate. While it is true that historical Phillips curve relationships have often proved to be unstable over long sample periods, the period since the early 1990s appears to be different. Given the evidence, an economic forecast that predicts more-positive (or less-negative) gaps in production or employment over time would also predict an increase in the 12-month inflation rate.

Board of Governors of the Federal Reserve System. 2015b. “Statement on Longer-Run Goals and Monetary Policy Strategy.” Adopted January 24, 2012, amended January 27, 2015.