Over the past several years, the Federal Open Market Committee’s longer-run forecasts of the short-term interest rate and unemployment rate have steadily declined. These forecasts reflect the Committee’s views about the levels of the policy interest rate and unemployment rate that will eventually prevail when the economy returns to normal. A simple monetary policy rule illustrates how the reductions in these forecasts can imply a lower projected path for the policy rate.

The Federal Open Market Committee (FOMC) has signaled that—if economic conditions continue to improve—it could soon begin the process of normalizing the stance of monetary policy. As it does so, it will need to judge what normal looks like. In particular, one popular rule-based policy measure would require the FOMC to quantify the natural rate of unemployment and the equilibrium real interest rate in order to calibrate appropriate policy. These longer-run rates are difficult to pin down and most likely changed in the aftermath of the Great Recession. In this Economic Letter, we use the evolution of the FOMC’s longer-run forecasts to infer its changing views on the natural and neutral rates. We then use a simple monetary policy rule to show how such changes can affect the duration of accommodative monetary policy and the eventual longer-run setting of policy.

The equilibrium real interest rate and the natural rate of unemployment

Since natural rates cannot be observed, they must be estimated using statistical or modeling techniques. In general terms, both methods attempt to pull out low-frequency or slow-moving trends in the data from those associated with higher-frequency cyclical variations. Purely statistical techniques rely on different data filtering methods to make these separations. Modeling techniques focus on incorporating data into representations of the economy that account for factors such as changes in supply and demand and the reaction of prices in order to estimate the natural rates of unemployment and interest (for example, Laubach and Williams 2003 and Curdia et al. 2014). Since each approach requires assumptions, forecasters and policymakers usually draw on estimates from a variety of sources to project natural rates.

Recent views from the FOMC 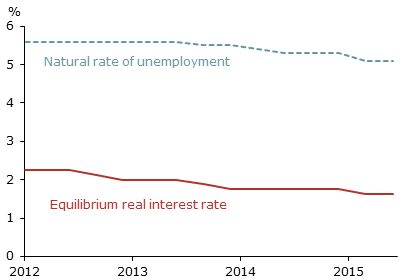 Notably, the declines in the natural rates pictured in Figure 1 are not unique to FOMC participants. Similar declines can be seen in other public- and private-sector forecasts, as well as market-based measures (Leduc and Rudebusch 2014 and Williams 2015). Although individuals may have particular views on what is behind the declines, there is growing recognition that changes in population growth and population composition—in particular the aging of the population—are important drivers. 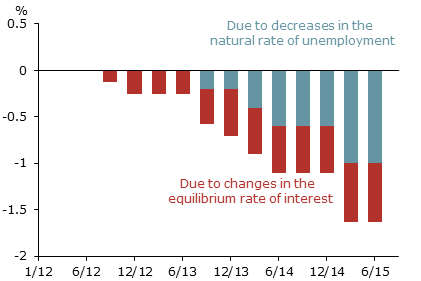 Of course, simple rules like the ones we apply here cannot fully capture the process of decisionmaking at the FOMC. However, the prescriptions from the simple rule illustrate the connection between natural rates and policy rates and show the sensitivity of policy to views on these values.

In this Letter, we document the decline of FOMC participants’ estimates of the equilibrium real interest rate and the natural rate of unemployment based on the Summary of Economic Projections. These long-run rates are important for policymakers when determining both the current conduct of and the future path for monetary policy. A simple monetary policy rule shows that, compared with earlier projections of these rates, declines in the natural rate of unemployment could translate into a longer period of accommodative monetary policy and declines in the equilibrium real interest rate could translate into a lower average policy rate in the long run.