The Stimulative Effect of Redistribution

Policymakers often consider temporarily redistributing income from rich to poor households to stimulate the economy. This is based in part on the idea that poor households spend a larger share of their income than rich ones do. However, ample evidence suggests that the difference in spending between these groups is significantly smaller than commonly assumed. A second assumption is that redistribution through policy is more efficient than through capital markets. Whether this is true is important to consider when proposing this type of stimulus policy.

The idea of taking from the rich and giving to the poor goes back long before the legend of Robin Hood. This kind of redistribution sounds desirable out of a sense of fairness. However, economists often judge a policy less on whether it is fair, and more in terms of whether it is efficient or inefficient, as well as whether it stimulates or slows economic activity.

In this Economic Letter we evaluate the stimulative effect of redistributing income from rich to poor households in a few distinct steps. We first provide a simple back-of-the-envelope calculation of the potential stimulus from redistributive policies. We then review the two main assumptions behind this policy prescription. We argue that the stimulative impact of such policies is likely to be lower than the simple calculation suggests.

The starting point for our simple estimate is the Consumer Expenditure Survey, which gives an annual picture of complete consumption patterns for U.S. households. The solid black line in Figure 1 plots the share of income that households consumed in 2013. The survey ranks households by income from low to high and divides them into 10 groups called deciles, with the 1st decile showing households in the bottom 10% of the income distribution, and the 10th decile showing households in the top 10%. Spending is then averaged for each decile of the income distribution. The shaded areas below the solid line reflect the share of income spent on different major expenditure categories.

Figure 1
Average propensity to consume by level of income, 2013 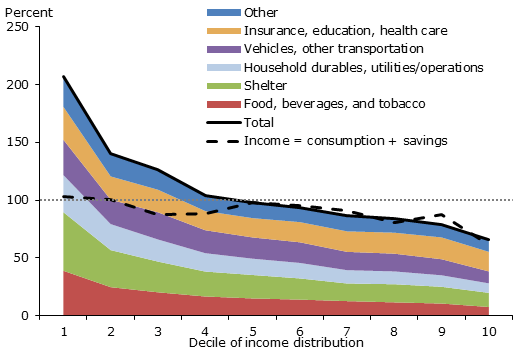 The figure suggests that households at the lower end of the income distribution spend more than twice what they make. At the upper end, households spend about two-thirds of what they make. Given this large difference in the propensity to consume between low- and high-income households, we consider the economic impact of levying a $1 tax on the rich and transferring it to the poor. This would reduce the high-income household’s spending by about $0.66 and increase the low-income household’s spending by $2, assuming each group spent additional dollars at their average rates. On net, it would create an increase in spending of more than $1.25. Even if the average for households in the bottom decile is overstated and they simply consume all the income they make, Figure 1 suggests every $1 of redistribution from the top earners to the bottom one-third of the income distribution would boost spending by at least $0.33.

Standard economic theory (Friedman 1956) suggests that if households can borrow and save, they will smooth their consumption over their lifetime. This means that their level of spending is determined by the total income over their lifetime, also called permanent income, rather than by their income on a period-by-period basis. Thus, part of the high reported rates of spending for low-income households in the data may reflect households that faced a temporary reduction in income, for example because of a spell of unemployment or self-employment business losses, or because households expected their income to otherwise significantly increase in the future. For such households, if current income falls substantially below their permanent income, they may end up borrowing money and spending a lot more than they make in a given year. Moreover, such households may not change their spending a lot if they receive a temporary redistribution through fiscal policy, since it would only slightly increase their permanent income. However, research by Johnson, Parker, and Souleles (2006) finds that there is a substantial fraction of households, especially with low liquid wealth and low income, whose behavior is not consistent with the permanent income hypothesis. Such households actually do adjust their spending quite a bit more than predicted by the theory, even in response to a temporary uptick in their income.

Another measurement issue that may explain the observed high spending rates of households in the bottom of the income distribution is that they may understate their actual income. This could result from underreporting government transfer payments, as documented in Meyer, Mok, and Sullivan (2009), or other sources of income.

Combining the measurement biases at the lower and upper ends of the income distribution suggests that the actual profile is much flatter than the initial one we discussed. According to the dashed line, the difference in average propensity to consume between poor and rich households appears closer to 30 percentage points rather than the 100-plus percentage points implied by the solid black line.

Our discussion of the permanent income hypothesis touched on the importance of access to credit for household consumption levels relative to income. If households have access to credit then they are able to smooth their spending in response to a temporary negative shock to income. Even if they do not have access to credit, households can still self-insure by setting aside savings to cover expenses in times of unexpected income losses. In both cases, peoples’ consumption decisions are driven mainly by their permanent income, and so a high propensity to consume in 2013 may simply reflect a temporary loss of income. The fact that households at the low end of the income distribution can consume substantially more than they earn may also suggest that they have more access to credit than is apparent. In this case, the simple back-of-the-envelope calculation may overstate what fraction of additional income these households would consume.

Finally, it is important to realize that we have discussed stimulative policy in terms of a temporary redistribution. More permanent shifts in redistribution of income will have a substantial impact on the relative labor supplies of low- and high-wage workers, on the incentives to save, and on expected permanent income levels. All of these influence how policy might affect the overall economy and are not part of our simple calculation here.

Surveys show low-income households tend to spend a larger share of their income than high-income households. Because of this, temporarily redistributing income from the rich to the poor could stimulate consumption and, through that, the economy as a whole. However, there is evidence that differences in propensities to consume this additional income across households are smaller than commonly assumed. Moreover, capital markets provide the opportunity for lower-income households to smooth their consumption and maintain it at an acceptable level even when their incomes decline, thereby providing an alternative source of economic stimulus. Thus, how stimulative a redistributive policy is depends crucially on how effective and efficient redistributing through policy is compared with the opportunities already available in financial markets.

Bart Hobijn is a senior research advisor in the Economic Research Department at the Federal Reserve Bank of San Francisco.

Alexander Nussbacher is an economics and statistics undergraduate student at the University of California at Berkeley.