Transmission of Asset Purchases: The Role of Reserves

The Swiss National Bank expanded bank reserves as part of its unconventional monetary policy during the European sovereign debt crisis. The unprecedented expansion involved short-term rather than long-term asset purchases. This approach provides novel insights into how central bank balance sheet expansions affect interest rates. In particular, it illustrates how an expansion of reserves can lower long-term yields through a reserve-induced portfolio balance effect that is independent of the assets purchased.

Since the global financial crisis, many of the world’s most prominent central banks have held their policy rates near the zero lower bound. To provide further monetary stimulus, they have also conducted large-scale asset purchases, often called quantitative easing or QE for short. Although the stated aims of such purchases have differed across countries, a common objective has been to reduce long-term interest rates, either broadly or in specific markets.

Despite its success, how exactly QE helps lower long-term interest rates is not well understood. Research has focused on two main channels. One is a signaling channel, which means asset purchases send a signal to investors that lowers market expectations about future monetary policy (see Bauer and Rudebusch 2011 and Christensen and Rudebusch 2012). If the markets perceive that short-term interest rates will be lower in the future, this should translate into lower long-term interest rates today, and thereby make investors indifferent between rolling over a short-term loan and committing to a long-term loan. The other channel is a supply-induced portfolio balance channel. When a central bank purchases long-term bonds, it reduces the number of these bonds available in the market, and thereby raises their price and lowers their return (see Gagnon et al. 2011).

In this Economic Letter, we describe a different type of portfolio balance channel linked to the extraordinary expansion of reserves that accompanies central bank asset purchases. We also show that this channel was active during the reserve expansions of the Swiss National Bank (SNB) in August 2011, as detailed in Christensen and Krogstrup (2015). Unlike other central banks, the SNB expanded its reserves by purchasing only short-term assets and leaving the supply of long-term securities unchanged. Yields on Swiss long-term government bonds fell following three key SNB announcements of these purchases. We argue that such declines can result from the response of banks to the extra reserves in their portfolios due to the SNB asset purchases through what we call reserve-induced portfolio balance effects, and find evidence supporting this transmission channel. Understanding these effects can help policymakers design future asset purchase programs.

If a central bank buys long-term instead of short-term securities, both supply-induced and reserve-induced portfolio balance channels could be at work, but they cannot be separately identified empirically. This is the case for all three of the Federal Reserve’s QE programs since 2008 and for the Bank of England’s asset purchase programs.

The SNB’s unique expansion of reserves in August 2011 provides a way to separate these effects. Because the SNB acquired only short-term assets and left the stock of long-term securities unchanged, by design this program cannot have caused any supply-induced portfolio balance effects on long-term yields.

The SNB expansion of reserves in August 2011

In normal times, the SNB achieves its mandate of price stability by setting a target range for a representative short-term money market interest rate, namely the three-month Swiss franc (CHF) London interbank offered rate, or Libor. The SNB uses short-term repo operations with banks to steer this market rate toward the desired target range. The exchange rate with other currencies is normally allowed to float freely. However, this policy framework reached its limit in March 2009, when the SNB reduced the policy rate to near its zero lower bound. The red line in Figure 1 shows the path for the three-month CHF Libor since 2008. 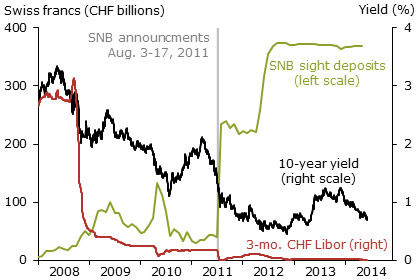 Despite the low interest rate, the Swiss franc started to persistently appreciate against the euro with the onset of the European sovereign debt crisis in the spring of 2010. By mid-2011, the downward price pressure from this appreciation began to threaten price stability. Swiss inflation was already low, and deflationary concerns were mounting fast.

In response to this situation, the SNB took new and unconventional measures in August 2011, before finally introducing a floor for the exchange rate the next month. The August measures consisted of three consecutive expansions of central bank reserves, referred to as sight deposits by the Swiss National Bank. The stated purpose of this program was to make the Swiss franc less attractive to investors by lowering short-term money market rates. The expansions were carried out within a few weeks and significantly increased the amount of banks’ outstanding reserves at the central bank, as shown by the green line in Figure 1. The program was unprecedented in terms of both its size and how quickly it was implemented. By early September 2011, the SNB’s balance sheet had expanded by an amount equal to 30% of Swiss GDP. In comparison, the Fed’s balance sheet is less than 25% of U.S. GDP. The expansion was achieved by buying back SNB bills, which are short-term claims issued by the SNB; by not rolling over maturing SNB bills; by allowing reverse repos with banks to expire; and by conducting foreign exchange swaps. As a result, the balance sheets of Swiss banks increased by about CHF 200 billion from July to September 2011.

The three consecutive reserve expansions represent an exceptional episode that is well suited to study how central bank asset purchases affect interest rates through the reserve-induced portfolio balance channel. The nature and sheer size of the announced liquidity expansions were completely unprecedented, and none of the announcements were scheduled in advance. As a consequence, financial market participants were surprised by these announcements. Their reaction to the announcements therefore contains important information about the program’s effect on long-term yields. We analyze these yields during a two-day event window around each announcement to allow enough time for the new information to be factored into asset prices.

To disentangle the different channels through which the SNB program lowered long-term rates, we use a dynamic term structure model of the Swiss government bond yield curve. This model allows us to break down bond yields into a component that reflects expectations for future monetary policy and a term premium, which is the compensation that investors require for taking on risk. The expected short rate component is associated with monetary policy expectations, or signaling, while the term premium component is associated with portfolio balance effects. Given that supply-induced portfolio balance effects can be ruled out for the SNB program, we interpret the changes in the Swiss term premium in response to the announcements as primarily representing reserve-induced portfolio balance effects.

We estimate the term structure model using Swiss zero-coupon government bond yields with six maturities ranging from one to ten years. We re-estimate the model for each day, which allows us to decompose, in real time, long-term yields into its expected short rate and term premium components. We evaluate our model estimates by comparing the predictions of yields at different maturities against predictions from a random-walk assumption or from the Consensus Survey three-month CHF Libor four-quarter forecast. Our model compares favorably against these alternatives over the 2006–2013 period.

Table 1 shows the two-day response of the Swiss 10-year government bond yield to the three SNB announcements. For all three announcements combined, the 10-year yield fell a considerable 28 basis points, or 0.28 percentage point. The term structure model decomposition suggests that close to 90% of this decline—25 basis points or 0.25 percentage point—was caused by the reserve-induced portfolio balance channel. In contrast, we calculate that less than 5% of the decline—1 basis point or 0.01 percentage point—is associated with the signaling channel.

This analysis shows that the response of long-term government bond yields to the SNB announcements came predominantly from the reserve-induced portfolio balance channel. The signaling channel played only a negligible role. Since the market supply of long-term bonds was unchanged by the reserve expansions, the data suggest that these portfolio balance effects are likely to have been driven mainly by the expanded bank reserves held with the SNB.

In this Letter, we highlight the unique role of central bank reserves for the transmission of QE to interest rates. Since only banks can hold reserves, the expansion of reserves that is part of any QE program may increase banks’ demand for long-term assets and depress long-term yields, an effect we refer to as a reserve-induced portfolio balance channel. The unprecedented expansion of reserve balances by the Swiss National Bank in August 2011 provides evidence of this channel. Using a dynamic model of the yield curve, we break down the real-time response of Swiss government bond yields into expectations about future short-term interest rates and term premiums. We find that the declines in long-term yields following the SNB announcements reflect reduced term premiums in Swiss bond markets. Since the program did not include any purchases of long-term securities, these findings suggest that an expansion of bank reserves achieved by acquiring short-term assets can give rise to a reserve-induced portfolio balance effect on long-term yields. This is a lesson that seems especially relevant for the European Central Bank and its ongoing QE program.