Labor costs constitute a substantial share of business expenses, and it is natural to expect wages to be an important determinant of prices. However, research suggests that wages do not contain much useful information for forecasting price inflation that is not available from other indicators. Therefore, one should not infer too much from recent wage data regarding the future path of inflation.

Wages and prices are closely related. Wages are an important part of businesses’ costs and are thus tied to their pricing decisions. Similarly, people take the general level of prices into account when figuring out how much pay they deserve for their work. It is intuitive, therefore, that wage data could contain important information about prices and, in particular, might be useful for forecasting price inflation. Indeed, the recent declines in some wage indicators following hints of strengthening earlier in the year have raised questions about what this might mean for future inflation.

In this Letter I summarize what research can tell us about whether or not wage data are, in fact, informative for future price inflation. Overall, the literature suggests that wages do not provide significant additional information beyond what can already be gleaned from other sources, including prices themselves.

In classical economic theory, the labor market clears at a nominal wage that makes labor supply equal to labor demand. Both supply and demand depend on the face value of wages relative to the overall price level—typically called the “real wage” because it shows how much can be bought with the wage at current prices. The real wage determines the benefit to the worker of working and the real cost to the business of employing that worker.

In the long run, the real wage is determined by factors such as productivity, bargaining power, and the ability of firms to mark up prices over costs. Consequently, prices and nominal wages must adjust relative to each other to be consistent with these fundamentals. Assuming that there are no long-run trends in profit margins or bargaining power—they may vary somewhat but cannot diverge arbitrarily over time—the shares of income going to workers and business owners should be roughly constant. Thus, long-run growth in the real wage can only come from productivity growth increasing the size of the pie to be shared.

Because of this, if nominal wages grow faster than productivity, they must, in the long-run, be associated with price inflation. Otherwise workers would ultimately claim all proceeds of production and business owners would be left with nothing. If wage inflation substantially exceeds productivity growth, then inflation must also be high to be consistent with real wages rising in line with long-run productivity improvements. Consequently, adjusting for productivity growth, there should be a close relationship between prices and wages. Indeed, this is shown in Figure 1, comparing core personal consumption expenditures (PCE) price inflation with changes in unit labor costs, calculated as compensation per hour (wages), divided by output per hour (productivity). Notable in this diagram are the wage-price spirals of the 1970s, when wage growth exceeded slowing productivity growth, causing firms to raise prices to restore profit margins, inducing higher wage demands, and so on. 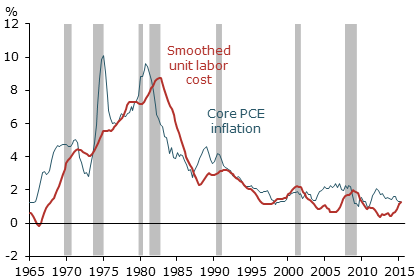 However, while the connection between wages and prices is relatively well understood in the long run, their short- to medium-run relationship is not so simple. Wages and prices may fluctuate relative to each other in response to transitory influences and to restore their long-run relationship. The bargaining power of firms and workers may vary and productivity may change temporarily. Even if there are no long-run trends in these variables, there may be changes in their steady-state relationships that lead to transient but long-lasting adjustments. These phenomena introduce complicated dynamics into the relationship between wages and prices that determine how useful wage data are for forecasting inflation.

Knotek and Zaman (2014) show that for various wage measures, correlations between wages and price inflation are moderate at all leads and lags and appear to have weakened in recent decades. Indeed, there are hints that price inflation may have come to lead wage inflation in recent times. Similarly, Emery and Chang (1996) and Sbordone (2002) find some evidence that rising prices precede growth in unit labor costs. This is consistent with the idea that businesses can’t easily change prices and therefore do so only infrequently so that, when they do, they must account for expected future costs. This implies that prices may capture expected future wage movements.

Nevertheless, lead-lag correlation analysis is a blunt tool since it does not account for how other changes in the economy might complicate the price and wage relationship. Allowing for these other factors can help draw out what information wages contain for future inflation. A more elaborate approach to this question is to examine if wages “Granger-cause” prices. Intuitively, this is a question of whether wages contain useful information about future price inflation that isn’t contained in other variables, particularly current and past price inflation.

Hu and Touissant-Comeau (2010) is representative of this approach. They found little evidence that wages Granger-cause prices, especially since the early 1980s. Some evidence suggests that prices Granger-cause wages, though this short-run relationship may have weakened since the early 1980s—see, for example, Emery and Chang (1996), Mehra (2000), and Knotek and Zaman (2014). While occasional isolated results like Ghali (1999) suggest wages Granger-cause prices, the preponderance of the literature suggests minimal additional information encoded in wages.

Granger-causality tests are informative but suffer from the fact that they are based on fitting a model that uses all available data up to the present. It is perhaps more useful to consider a model chosen based only on data available at the time a forecast is made, replicating the experience of a real-world forecaster. Two influential studies by Stock and Watson (1999, 2008) adopt this approach in comparing forecasting models for inflation.

Stock and Watson (1999) examine the performance of Phillips curve-based models that use economic activity measures and lags of inflation to forecast future inflation. For example, their benchmark case uses the unemployment rate to measure activity. While they report that this benchmark can be improved upon, they show that forecasts using wage measures fail to add information beyond that already contained in lags of inflation. Similarly, their 2008 study shows that models using common wage measures may perform even worse than their preferred benchmark without wages. Using somewhat different approaches, Emery and Chang (1996), Hess and Schweitzer (2000), and Knotek and Zaman (2014) similarly find minimal benefits from using wages in forecasting price inflation.

Of course, even if estimates of the economy’s past behavior were reliable, one could imagine that “this time is different” because of some change in the economy. For example, Daly and Hobijn (2014) suggest that low levels of inflation may change the behavior of wages because of downward nominal wage rigidity. When firms want to reduce wage costs, they typically do so without cutting wages in nominal terms. Instead they allow inflation to erode an unchanged or slowly increasing nominal wage. However, Daly and Hobijn argue that in the recent low-inflation environment, this erosion has been so slow that pent-up real wage cuts have restrained wage growth, despite a recovering labor market. This kind of change in wage behavior might conceivably also affect wages’ forecasting power for prices.

There is also considerable uncertainty over the steady-state balance between labor and business owners, captured in labor’s share of income. This share was once thought fairly stable over time, despite some transitory variation. However, over the past 25 years it appears to have drifted downwards. This secular decline has been attributed to businesses adopting technological advances that undercut labor and also to the influences of globalization, as in Elsby et al. (2013).

The decline in the labor share could mask underlying relationships between wage inflation and price inflation. As noted earlier, the link between the two over the medium term is based on a fairly stable labor share of income. If the changes in this share are not well understood, one might worry that the current relevance of the studies discussed above is limited.

Nevertheless, recent work by Peneva and Rudd (2015) accounts for such structural changes by using techniques that explicitly allow relationships among variables to evolve over time. Their analysis suggests that pass-through from different measures of wage costs to prices has weakened in recent years or remained economically insignificant. This suggests that, even if structural changes have occurred, they may not have changed the essential findings from earlier investigations.

These results do not imply that wages and prices are unrelated. Certainly they are tied together in the long run, and wage data will surely contain some information for future price inflation. However, after incorporating information from prices and activity measures, the marginal additional benefit of using wage data appears small.

What are the implications of this evidence? Figure 2 shows various common ways to measure wage pressure. Some of these measures have weakened in recent months, after hints of strength earlier in the year. Many market participants have watched these series closely, attempting to divine their implications for inflation. Many interpreted the earlier firmness as suggesting an imminent uptick in inflation and, likewise, the recent weakness as suggesting subdued price inflation in the future. However, this discussion suggests that one should not necessarily draw such conclusions. For example, rising wage measures might simply increase labor’s share of the fruits of production and squeeze profits without much effect on price inflation. 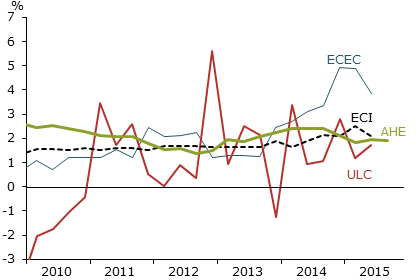 Fundamentally, the weak forecasting power of wages for prices suggests that unexpectedly high or low inflation could occur regardless of the recent behavior of wages. Thus, as ever, policymakers must be vigilant to ensure policy is consistent with the targeted inflation rate.

Researchers have extensively studied how wage data might help predict future price inflation. The overall conclusion of the literature is that wages generally provide less valuable insight into future prices than some other indicators. In fact, models that do not incorporate wages often result in superior inflation forecasts.